If you've been reading at all here this past year you'll know I've been hot on the trail of researching and building for a book on medieval furniture. Specifically the furniture shown in the pages of the storied Maciejowski Bible. That work has moved into a holding pattern for the short term as I try and put the horse back in front of the cart and convince a publisher to believe in me so I can deliver work to their standards instead of working backwards to redo / reshoot things.

That doesn't mean I've stopped researching, reading, and drawing. In my mind the work becomes more and more organized with every day.

Outside of religion and politics, I have never known anything to be more the victim of preconceived judgement and notions than medieval Europe. People love trivia and they like to display their intelligence, (I'm no different) so they spout off whatever the last thing they saw on the history channel, or in a movie, or read in a dogeared copy of John's Bathroom Reader. One of my goals spending the last two decades as a medieval reenactor, has been to try and gently add some common sense to the weird things people believe.

Buy me a beer and I will tell you some of the conversations I've had.

Furniture is no different a victim, perhaps it's even worse because it settles into the background on most people's tapestries. When was the last time you gave any real thought to your dining room chair? It's simply there when you need it. Most of us see people and stories, I spend the Lord of The Rings movies trying to decipher the joinery of the chairs in Rivendell.

So what was furniture like in the Middle Ages? The Dark Ages? How about more specifically in France around the years 1240 - 1260 AD? How can anyone know? What has survived.

The answers are there in front of us, you just have to open your eyes and mind to see them.

I saw a video this morning on a man named Lars Andersen who has taken an eyes open approach to medieval archery. Take a quick few minutes and watch it. It will impress you.


The evidence and answers to Lar's questions were in ancient writings and manuscripts. He wasn't the first person in a thousand years to read the words or observe the manuscript representations of archers. But he looked at things with his eyes open and thought maybe he should try to do things like he sees them instead of doing them like he'd always been told he should.

But how can we trust the artisans of medieval times. We all know the term "artistic license" means those bastards can make up anything they choose. Besides their perspective is all wonky, how can you trust them.

I had the same thoughts and worries until I was studying some pages from the Morgan bible one late night and found a detail that made me a believer. 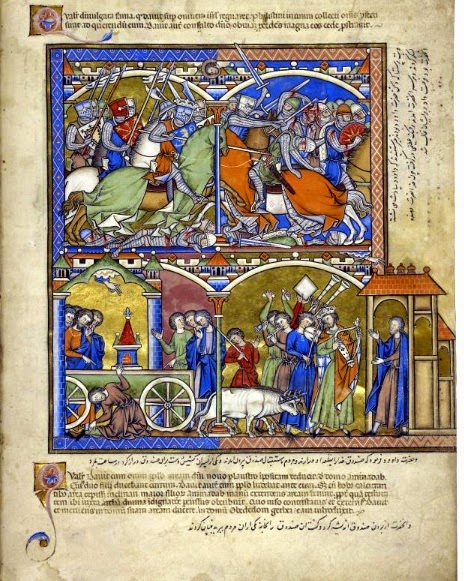 This is Folio 39 Recto. It displays King David leading a crushing rout of the Palestinians on the top and below the good people of Israel celebrate the victory around the Arc of the Covenant. 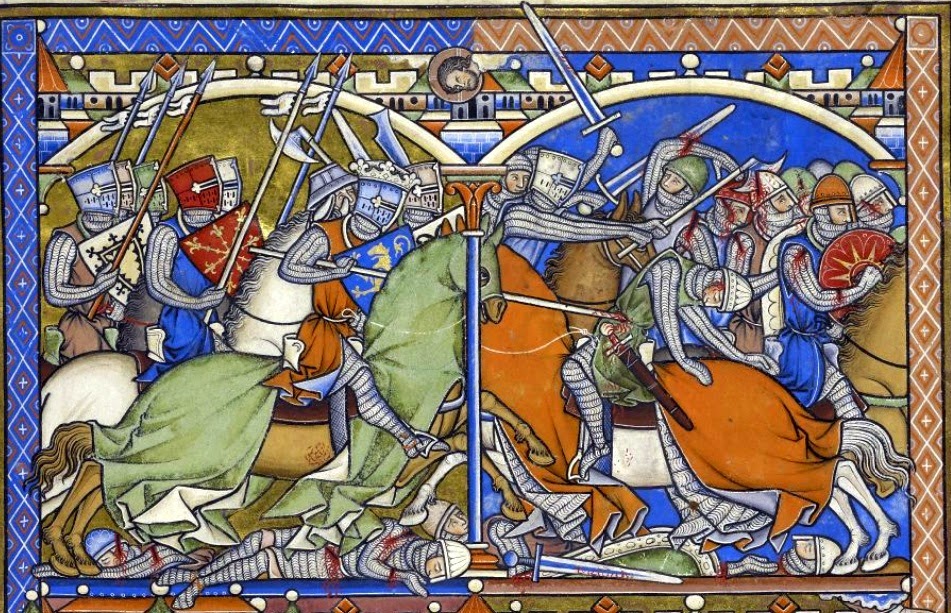 There's an interesting commentary there I'm not interested in wading into. 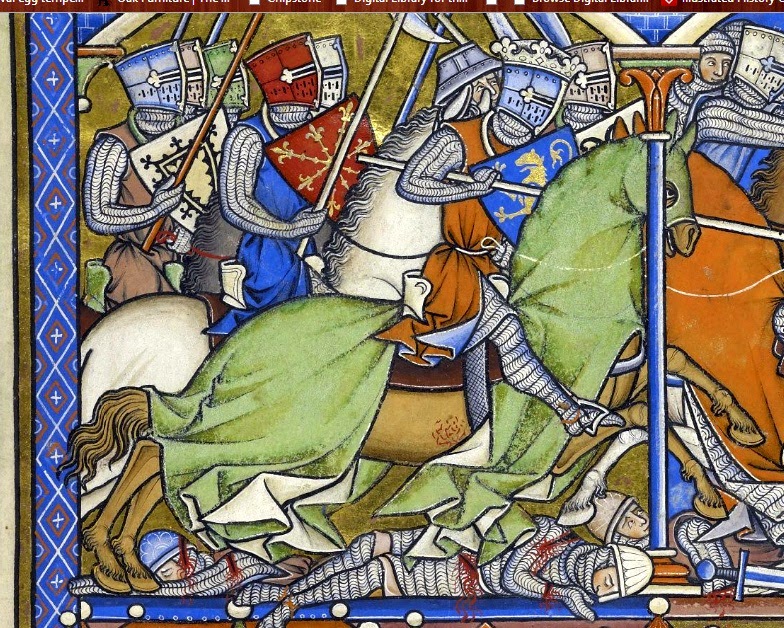 We're starting to focus in on King David. resplendent in his painted full face helm and accessorizing crown. The epitome of masculinity and virile combat prowess. 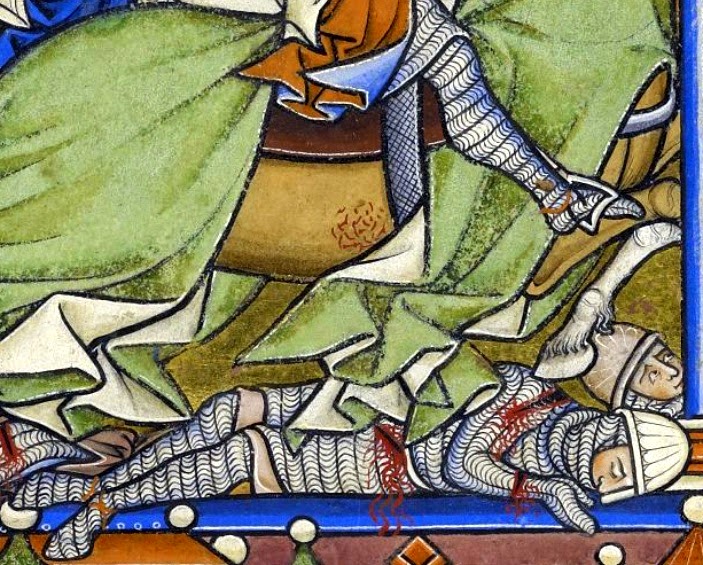 As we look below King David's mount we can really begin to see some details present in the work. Representations of the individual rings of steel in the maile armor. Fluting for added strength on the nasal helm of the prostrate warrior and and etching or decoration present on the helm of the oddly smiling character behind him.

I particularly like the leather straps at the ankles of both King David and the trampled Palestinian. From experience I would surmise these are either to help tie the maile chausses (armored leggings) in place to keep them from slipping and binding at the ankle joint and/or to tie on a symbol of knighthood. A set of spurs. 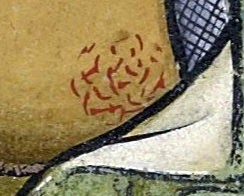 As I was looking at the picture my eyes settled on these red brush strokes on the underside of King David's mount. After pondering it for a few moments it occurred to me . . . these were representing the marks that would have been made by the King's royal spurs as he urged his mount into battle.

My mind was blown.

I woke up my wife to show her I was so excited.

Seeing this was my second Ah Ha moment chasing this subject. This is the kind of thing the person who created this page of the manuscript would have seen commonly. The men who illustrated the Morgan Bible were drawing snapshots of the world they experienced, and they were doing it in great detail. It's the closest thing I can hope for outside of finding photography or film footage from that time.

Come to think of it, the only thing that could be better is a Delorean, a Flux Capacitor, and 1.21 Gigawatts of power.

So I've decided to do my best to trust the artists who created the Morgan Bible. To just try and look with my eyes open at their work and try not to pile my own baggage and ideas into it.

It's difficult. In the end we will see how well I do. Eventually I have to trust my own filter and focus too. Maybe the best I can hope for is a balance between both visions.


*** EDIT: Since the video above of Lars came out, I have seen more and more evidence refuting his claims, or at least calling them into question. I consider this to be a healthy thing. Peer review is important in many respects. To be fair though, most of the criticism is to his sloppy references and claims.

Most experts chiming in on Lars video relate to the depictions by artists of battle techniques as suspect because there is little chance they were there and directly observed the action. Some go on to say that things the artists could personally observe (they reference directly clothing and armor)  should be considered accurate.

That being said my main interest in the Morgan Bible is not the hypothetical battle scenes, but the furniture. I would argue that furniture falls squarely into the realm of "direct personal observation."

I guess I won't know for certain until I face my own peer style review.