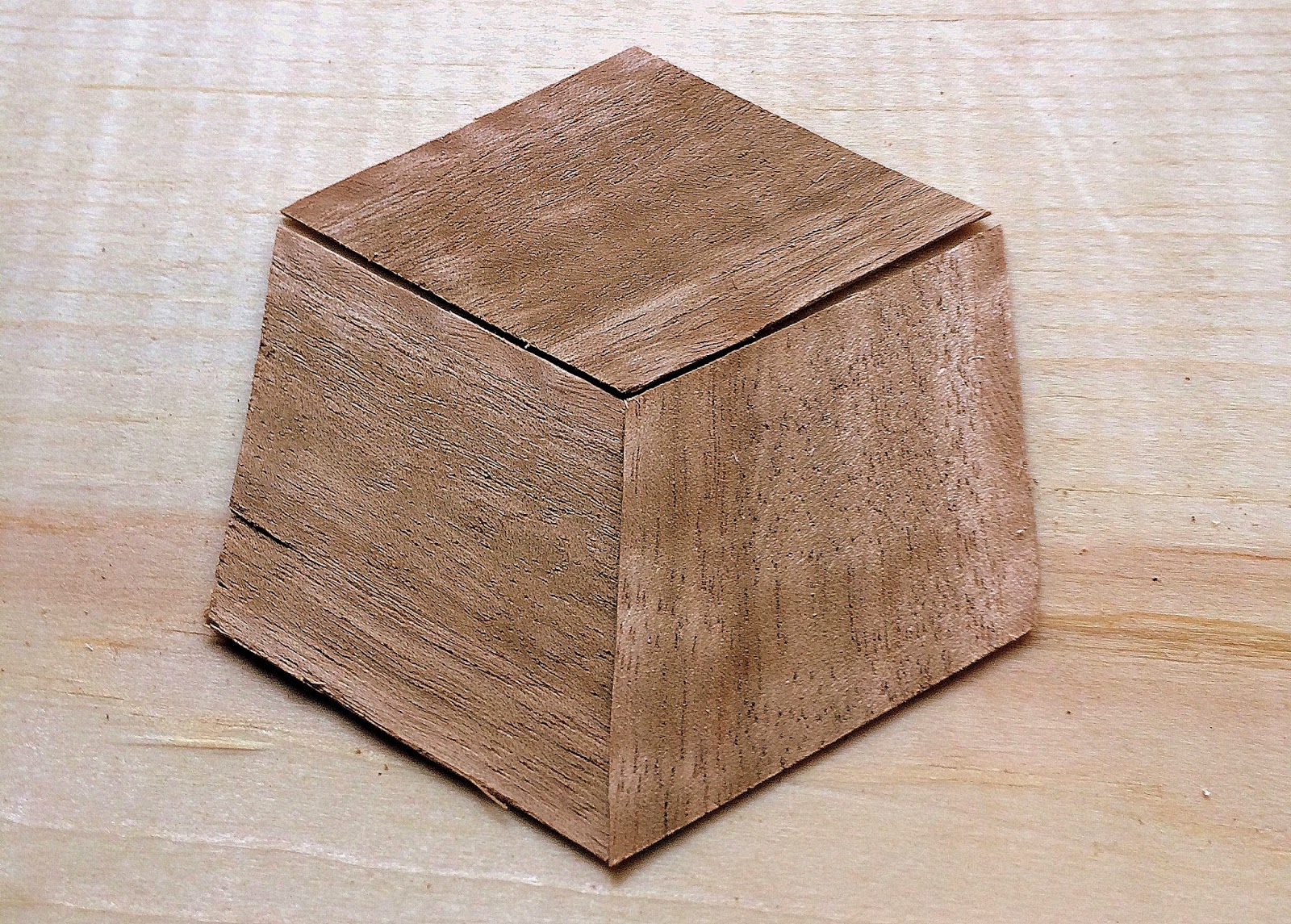 One of the surgeons I work for often uses a line I love.

"I'm not interested in making a meal out of a snack."

A more poetic way of saying Keep It Simple Stupid.

I suck at listening to that advice and the humble nail cabinet has paid the dear price. It's like putting a ball gown on a dancing bear. There is no need to add frills to something that is already a spectacle. Still, I have been looking for the proper canvas to experiment on. 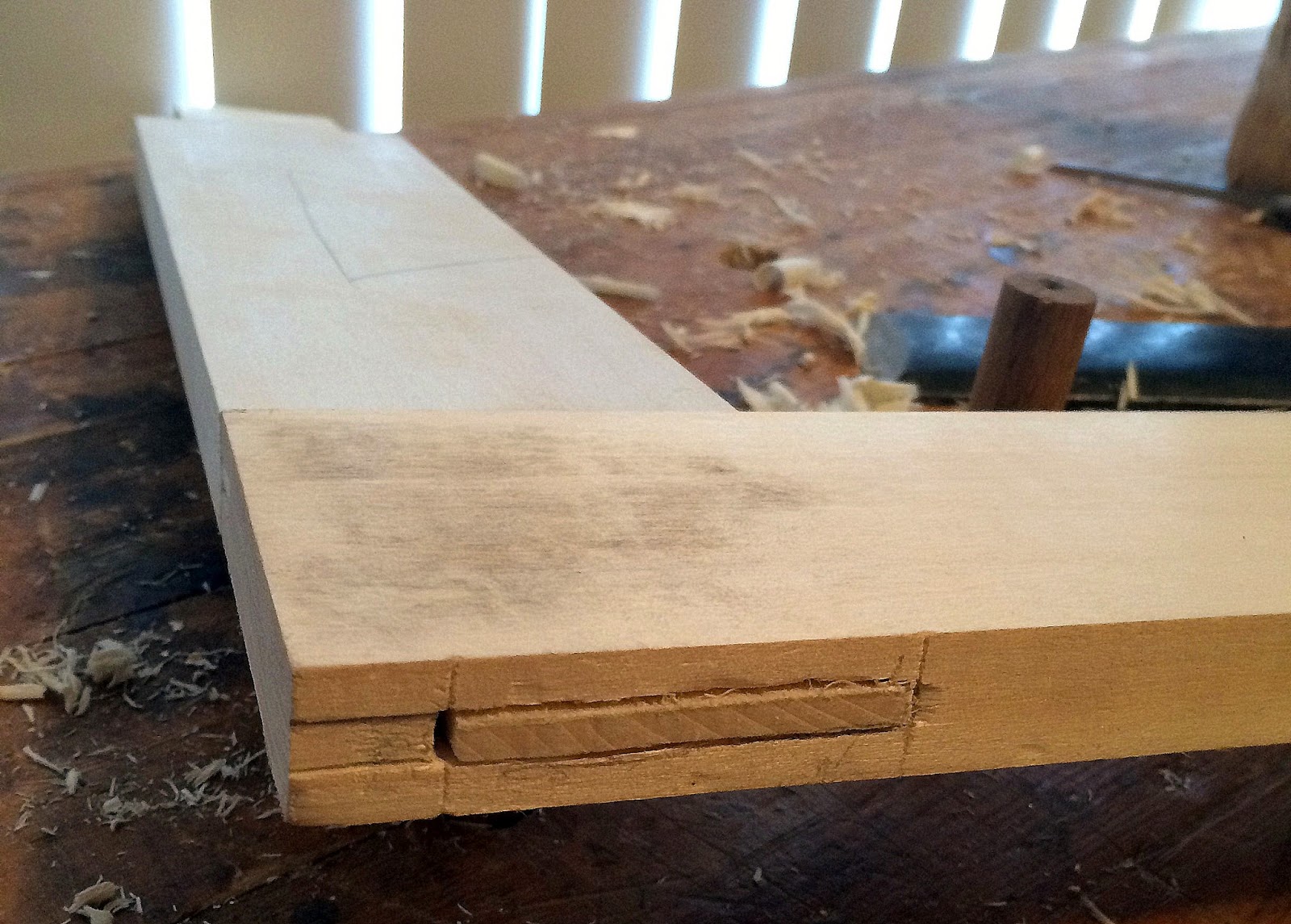 I'd veneered the drawer fronts and painted the inside of the cabinet is black, You can see it HERE. It was time to start on the door. The original had simple mitered corners. It never matters how careful I am, getting miters as perfect as possible is a challenging thing for me. I didn't want to struggle and I wanted something that felt a little more like me.

I went with hunched mortise and tenon. I will even peg them once everything is put together. I like the permanence of this joint. 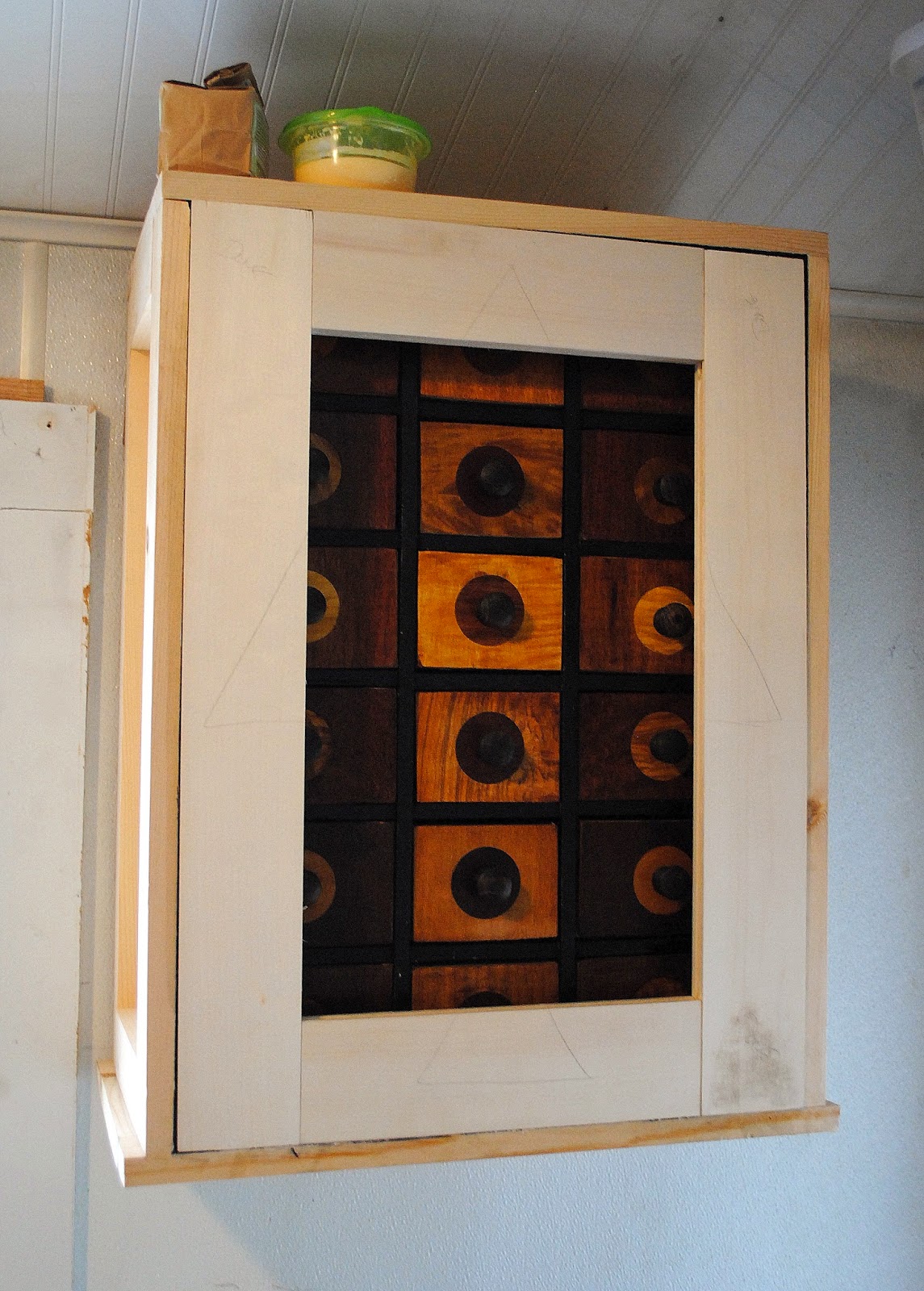 I ran out of my pine stock and needed to go buy a board to make the door. I picked up a piece of Aspen because it was more economical than clear pine and because I'd never worked with it before. The stuff works like styrofoam complete with the sticky static cling. It's glaring white clearness makes me consider using it in the place of holly stringing for future inlay projects. 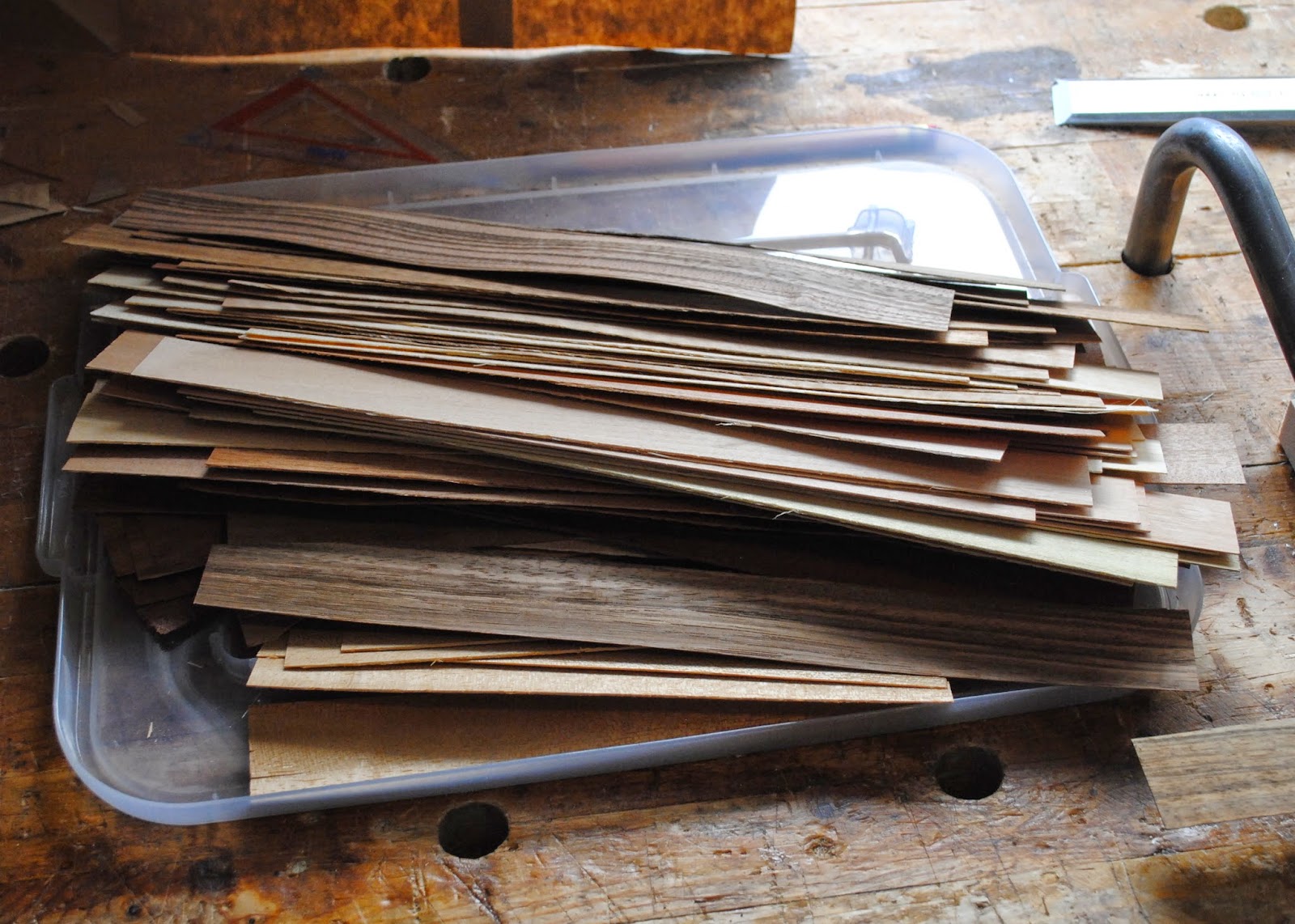 I used the same string inlay cutting device I used to cut the circles on the drawer fronts to cut my variety piles of commercial veneer into 1 1/4" wide strips. Don Williams, Papa Parquetry himself, cuts his own veneer at 1/12th inch thick, much thicker and easier to manage than these thin potato chip veneers. But you play the hand you're dealt, and this time around I had a variety of things. 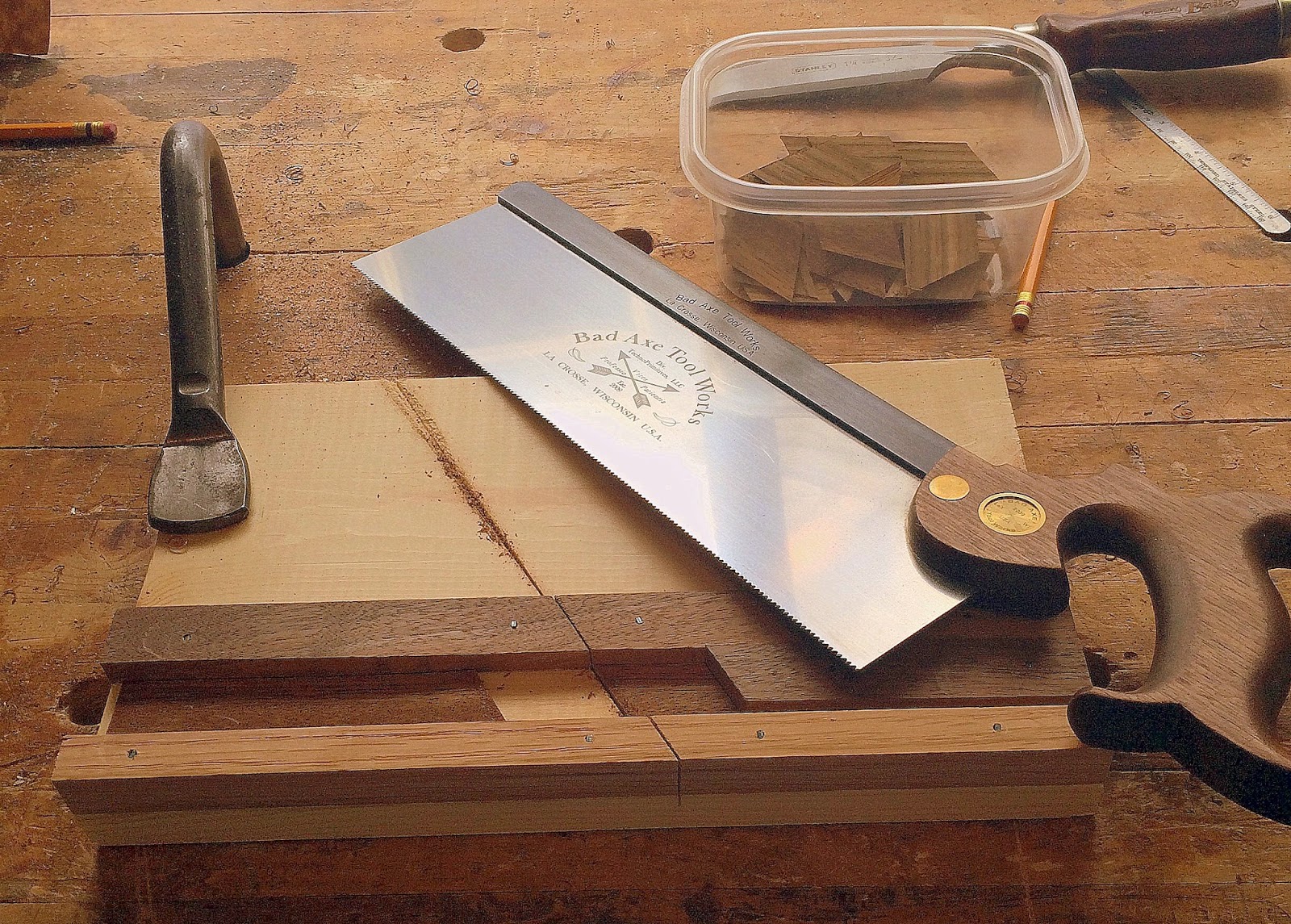 Following along with Roubo and the Don of Dons, I made a quick cutting jig to turn the strips into parallelograms by making 60 degree cuts. 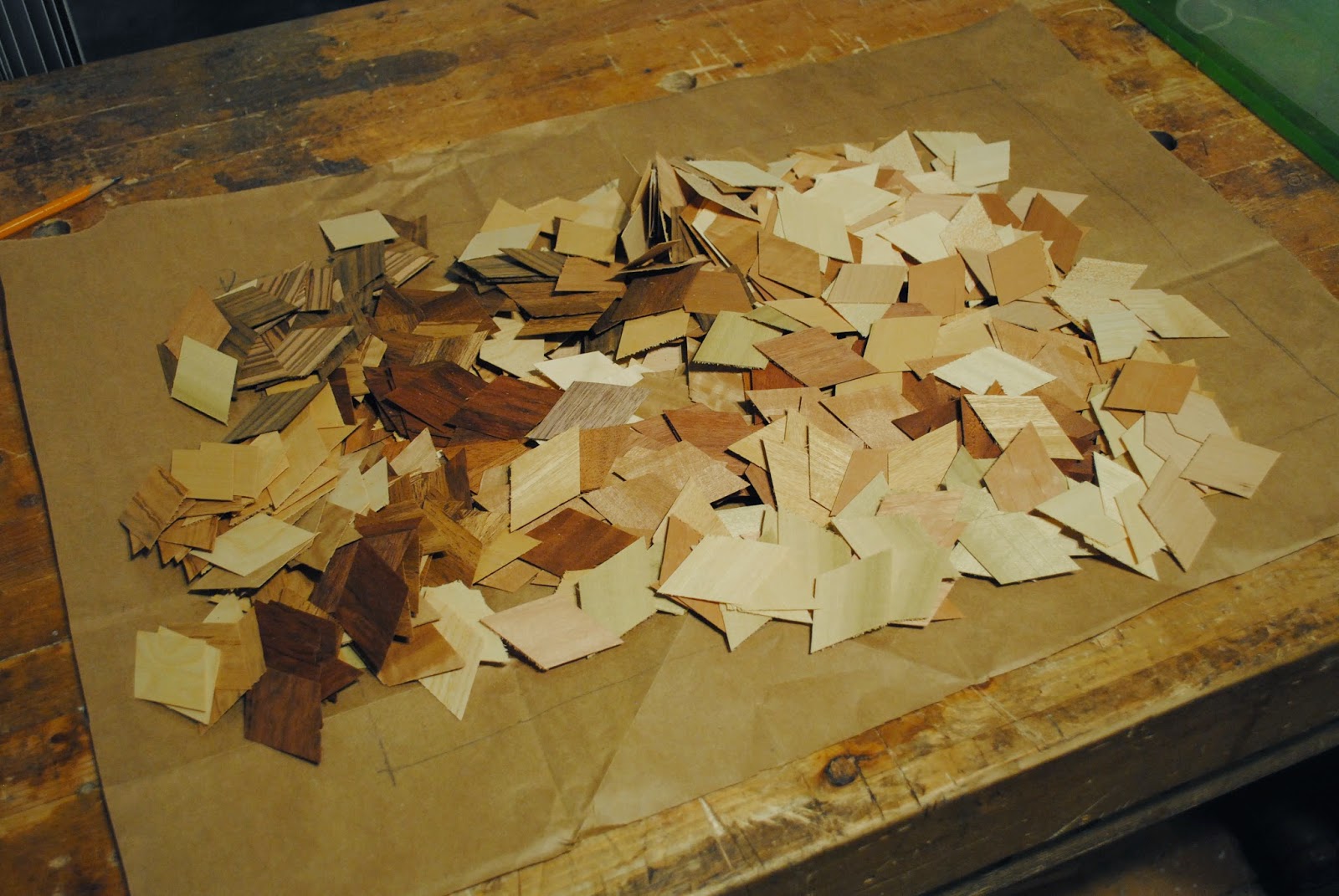 This whole process is something I would certainly love to take a class and get some first hand instruction in this parquetry process. Preferably I'd love to head east to Don's Barn and spend a week or so pestering him with questions and absorbing as much information as I could. Again I'll play the hand I'm dealt and give this a go alone in the shop. I'm girded by the writings and tutorials of both Master Roubo and Williams so the word "alone" is far from true.

Still there is something to be said for striking out alone. Mistakes are life's best teachers and sometimes you figure out a way that works better because nobody was there to tell you it wouldn't work.

I will make it to the Barn one of these days. I'm not going to tackle Boulle Marquetry on my own. 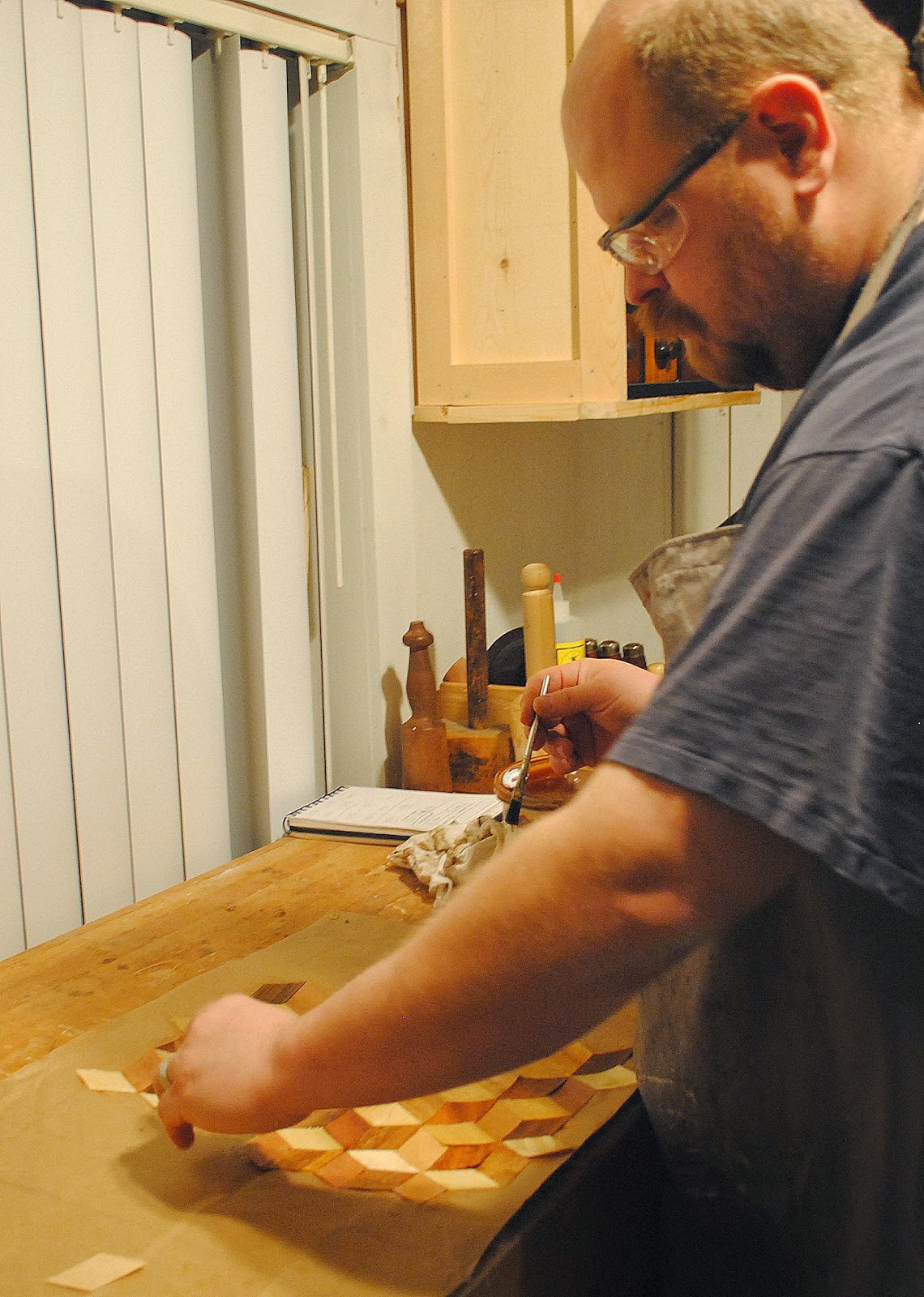 I started out the next day with a field the size of the door panel marked out on a big piece of brown craft paper. I poured a decent amount of Old Brown Glue into a mason jar and immersed that into a hot water bath maintained in an old small crock pot donated to the cause. 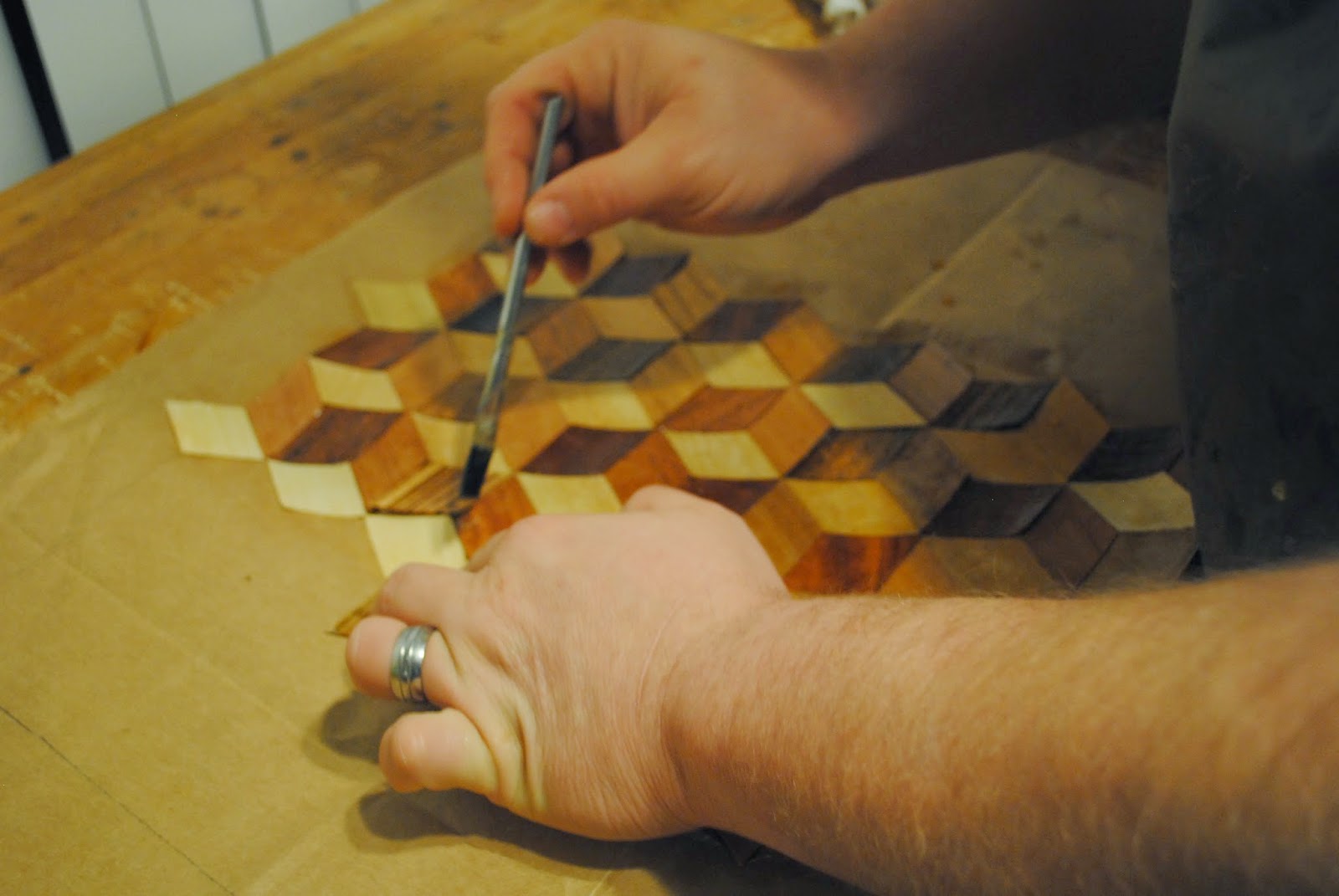 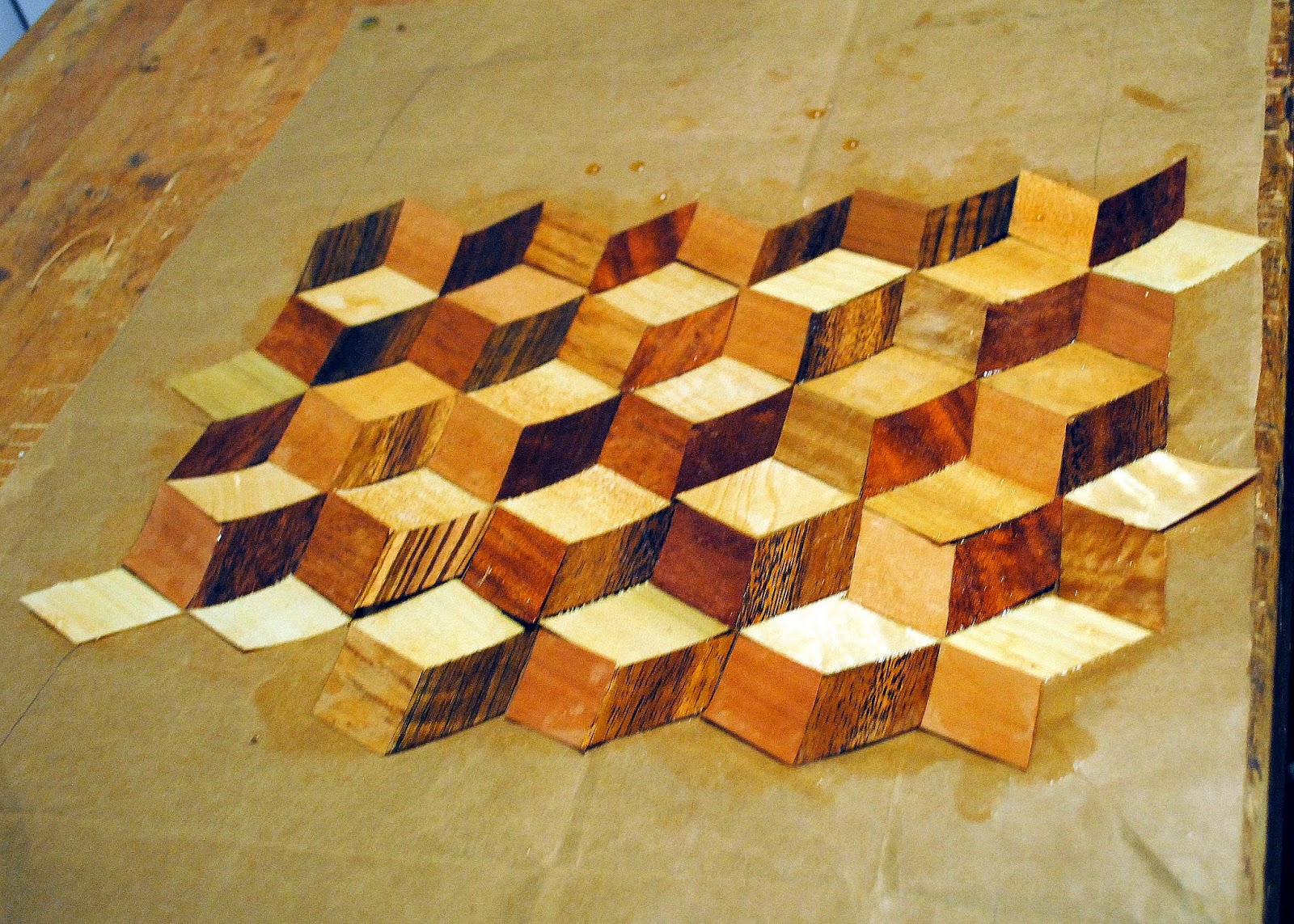 But with such a variety of species to my veneer, and not enough of any one "tone" I had to change the plan and instead of burying the parquetry behind the star, give it a shower, slap on some lipstick and put it in the spotlight. To do this I alternated the tones of light, medium, and dark to make the illusion of directionality and light. It adds to the three dimensional optical illusion that the cubes create on their own.

Besides it makes me think of the old video game "Qbert" 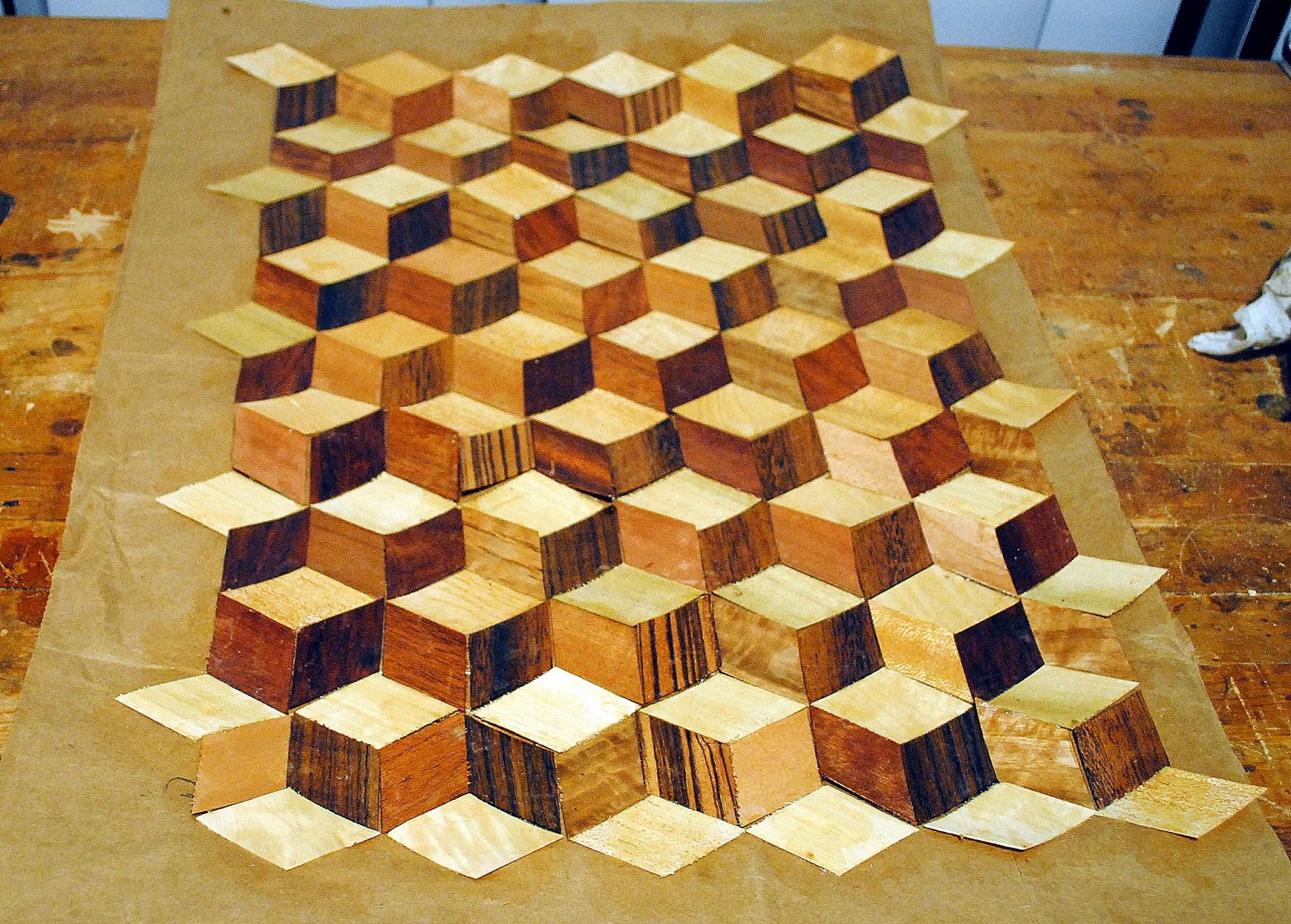 Once the space was filled in I left the piece to dry overnight. I was careful, so careful with the grain directions and colors. It wasn't until the last row I made an error and didn't notice until I was looking at the photos later that evening. 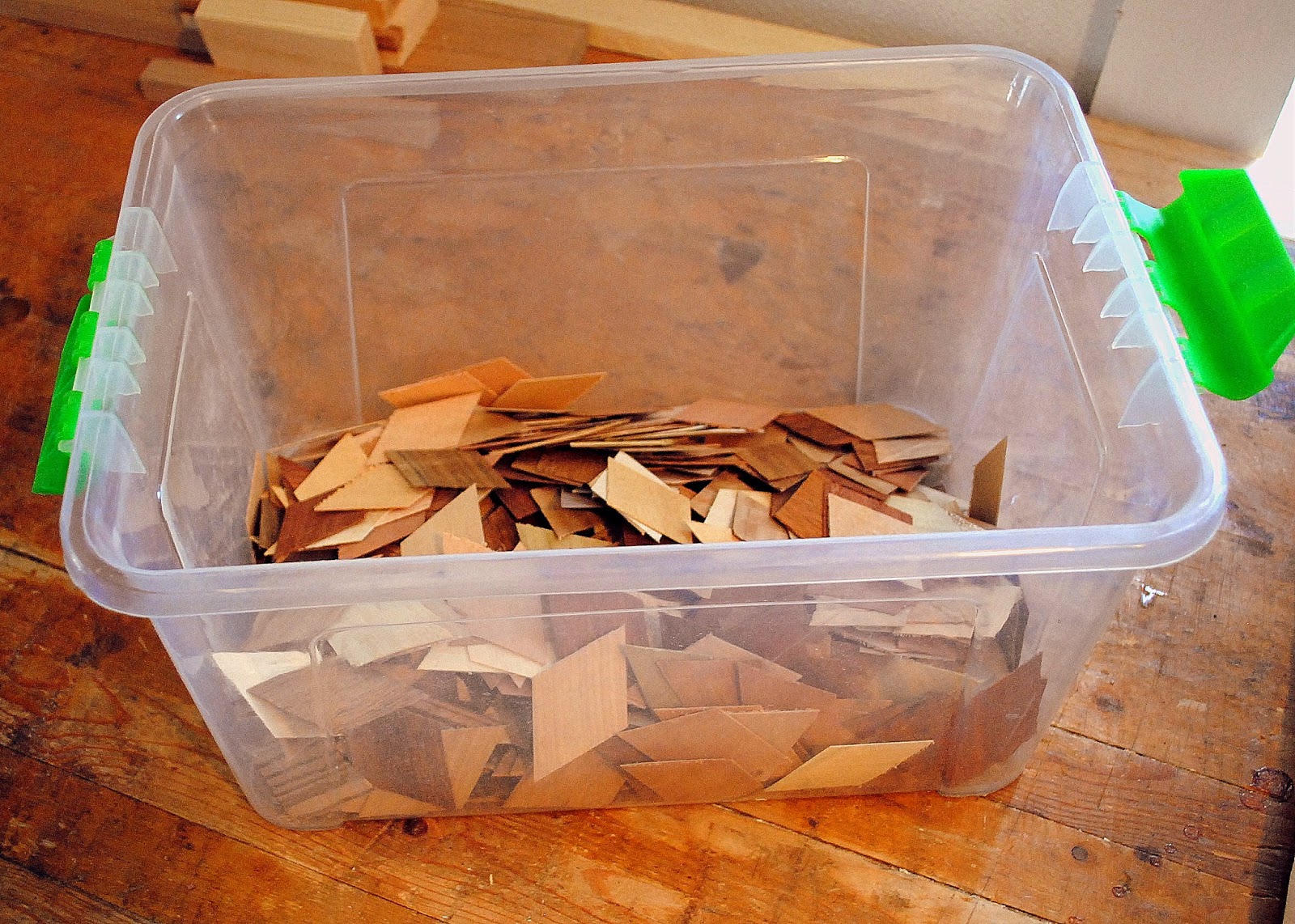 Turns out I had a lot of lozenges left over. I may start doing this to everything. Veneered benchtop? 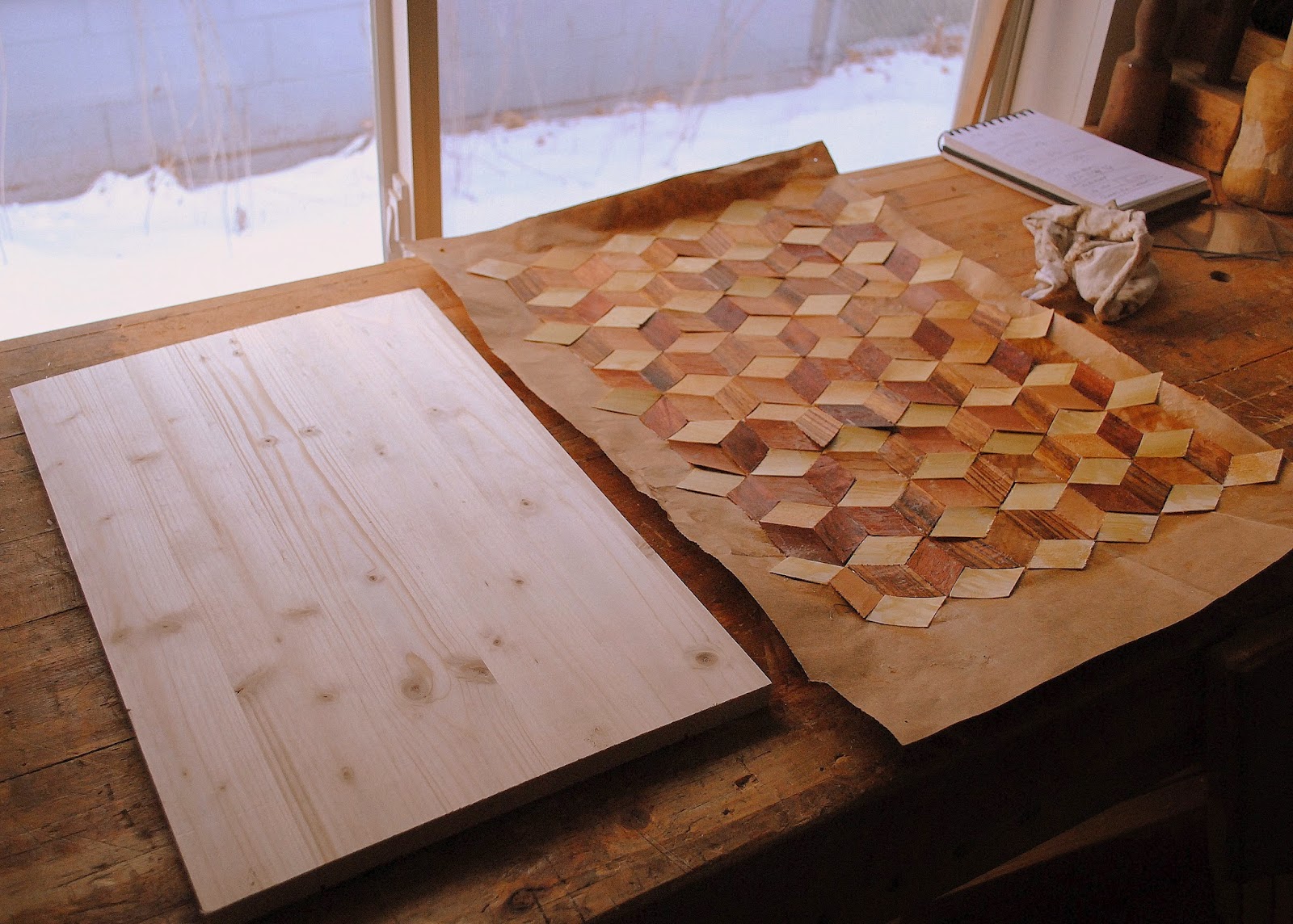 As I looked at my glued up paper this morning I was a little disappointed at how several of the lozenge corners had curled a bit and lifted off the paper. One more point for the thicker shop cut veneer. Still I didn't think it would be a very big deal.

I brought up the pine panel that was to be the substrate and covered both surfaces with glue. 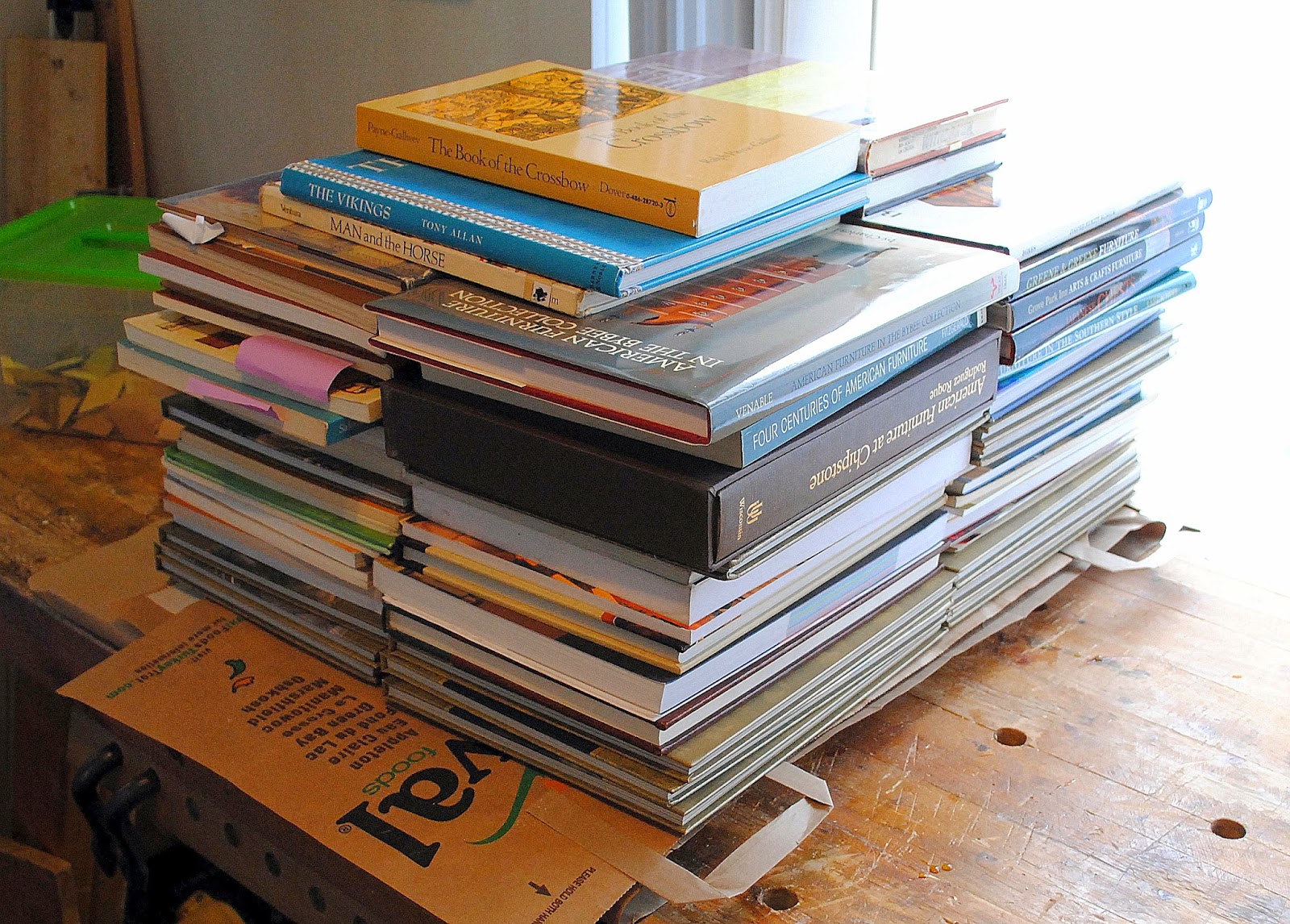 I have my Roubo Press Vise but only the one right now and it's only wide enough to press half the panel. So I went low tech and piled a shit poop crap doodie big load of books on it.

Half a day later I could feel the glue that dripped down the side of the panel had fully set. What the heck, let's get those books back to holding the bookshelf down to the floor instead. 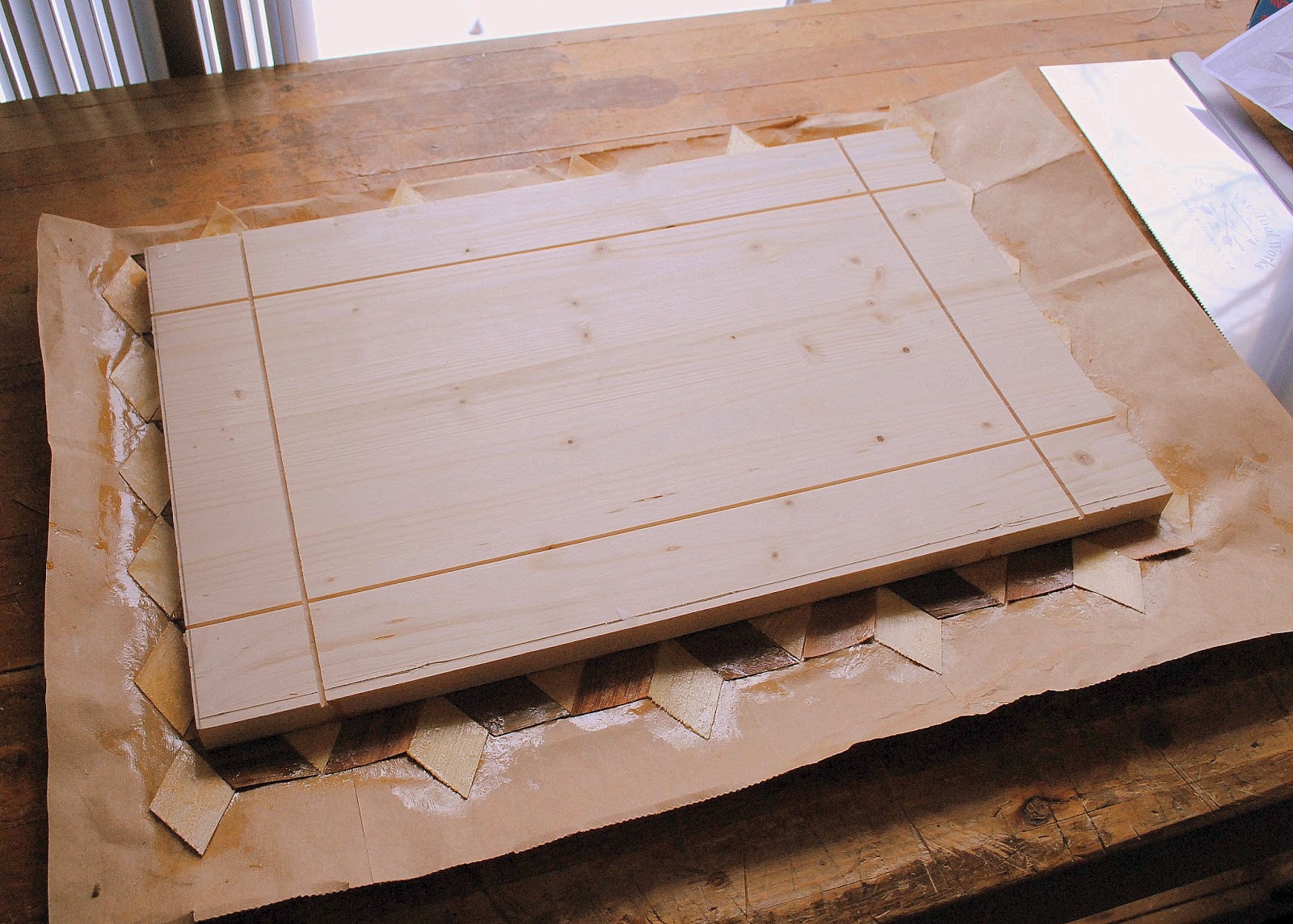 Here you can see the outside face of the panel. scored for a raised panel. Adhered down to the veneered sheet. I used my hybrid filed tenon saw to cut the excess from the sides. 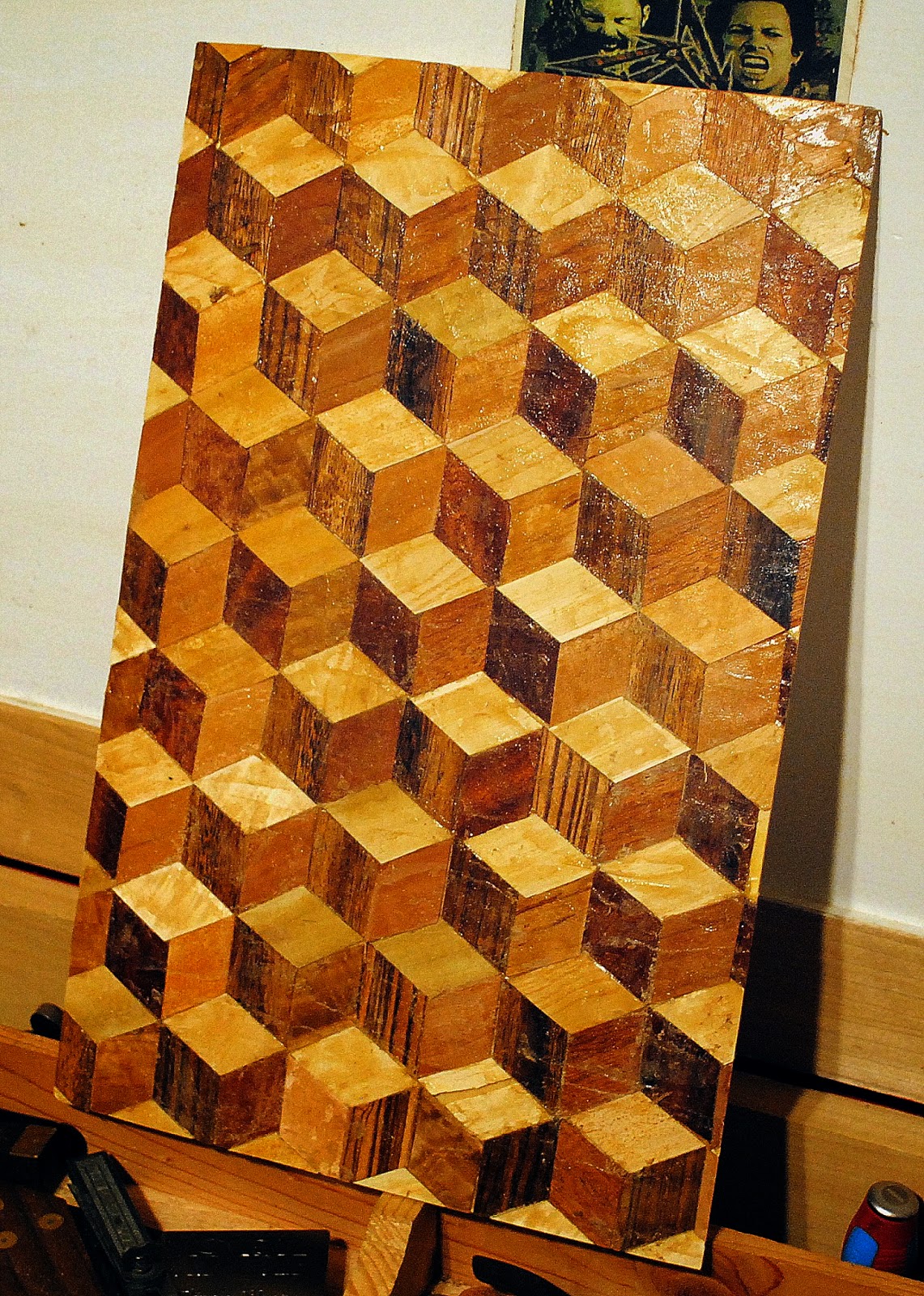 Then I used a sponge and lukewarm water to wet the craft paper and loosen it's grip on the glue so I could peel it off with my fingernails and a piece of cut saw plate.

Now the panel is sitting and resting. Allowing any of the glue I loosened taking the paper off to reset and later tomorrow I will tooth it, scrape it, and lightly sand it. I'm gonna go polissor and beeswax for the finish here.

My technique is for certain imperfect. There are a few slightly bubbled spots I'll deal with as I move through the final stages. That shouldn't be a big deal. The two important things to remember are this is just a nail cabinet and so I shouldn't fret so and the first one's down and nearly done. Some lessons are learned and my next one will be better.

The first step is supposed to be the hardest right?