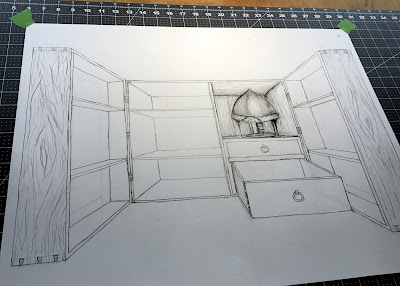 A couple years ago, when I first sat back down at the drawing board after a nearly two decade hiatus, I was worried about myself. In my teens I immersed myself in art of all variety, something barely offered in high schools any longer. I have since found out with formal classes, weekend workshops, and independent study programs I actually received more "Art" training than many college level Art Majors. (The discussion of the disappearance of art and shop classes from high schools is shelved for another day.)

I finished high school believing I would take a year or so off, then attend a "real" art school (whatever that means, we all suffer through the pig-headed-ness of teenage idealism.)  Instead I did something that mattered, I married my high school sweetheart (almost 22 years and going) We started a family, and I found a job in healthcare that could provide for them and filled a life too full to add a sketchbook to the load.

My teenage art school self would say something idealistic at this point about holding your artistic resolve in the face of blah blah blah and the blah blah blah. I'd like to meet my teenage self someday. I'd poke that whinny bitch in the eye. Life is about choices and compromises and I don't regret most of them.

Then I started working on my book, and there were concepts I knew I could illustrate better than I could stage a photo, but I was intimidated to sit down and apply graphite to paper again. It's a perishable skill, (for the record, drawing is a Skill NOT a Talent, there's a difference and stop mixing them up, or I'll have to poke you in the eye!) Then Peter Galbert's book arrived on the scene and changed the meta of what a good looking woodworking book can look like. Around the same time I started following a gentleman named Roland Warzecha in his quest to faithfully rediscover medieval sword and shield combat styles. He is writing and illustrating a book on the subject and his work is just fantastic.

For the last 20 years I hadn't done much more than doodle, A gesture drawing, a cartoon face, a bunch of measured drawings. Most of my agglomeration of art supplies had been donated to my children's explorations, but they could be replaced. Mostly I was intimidated by my loss of skilled practice. My eye knows what it wants, what to look for in something satisfactory, I am a very tough and detail oriented critic, especially versus myself.

I sat my ass in a chair and started working at it again. Eventually it's the only option left. I always had a bit of a sketchy style before, but I'm working harder on cleaner lines and solid contrasts now. Finally things are really starting to fall back into a rhythm, I can ease myself into the flow state I used to be able to call at will and I'm starting to turn out work I don't absolutely hate in the end.

If you put it down, you can get it back, you might have to fight a bit, but it's possible. I would say this crosses all hard won skills, drawing, writing, woodworking . . .

If I find the time to re-learn how to play guitar I'm worried I might start to see my acne return!

Damn, then I'd have to poke myself in the eye.