It had been one of those weeks. Family medical crises, waiting rooms, playing taxi driver, and phone calls, my god the phone calls. By the middle of the week I was feeling more than a little restless and stuck in my head. It was almost 9:00 at night, the sun was just thinking about setting, I turned to my wife and said something like,

"Since everything seems to be under control at the moment, I think I'd like to go out to the shop for a bit. I'll probably just clean up and organize something. Does that sound OK?"

I flipped on the lights, fired up the fans that circulate the summer humidity, and started putting away errant tools left out. I vacuumed up shavings and sawdust from the floor and started moving stock around one the lumber racks. I started moving a pile of thin 1/8" and 1/2" thick pine I had leftover from resawing 1x stock and I had a thought.

This was going to be more than just a clean up night.

I love working out of my traditional tool chest, but I had been gathering clutter in a couple areas and it has been driving me crazy. Pencils, pens, rulers and dividers form a huge golumpus mass in the top tray, and I've never been happy about my mixing of screwdrivers, pliers, nippers and spokeshaves in the middle tray. I never intended it, it just one of those things that happen, but the thin, resawn stock I was holding suddenly seemed like the answer.

I pulled everything I wanted out of the tool chest and laid it out on the work bench. 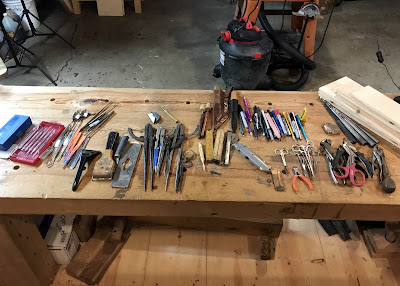 I watch a lot of maker videos in a year, but less woodworking videos than you'd think. I feel like I get more from videos by blacksmiths, replica prop makers, 3D printing gurus and backyard mechanics. Looking outside your chosen genre brings fresh ideas and perspective to your work. Earlier that day, sitting in an ICU waiting room, I was binging Adam Savage's "One Day Build" videos from tested.com particularly one about file storage and his rolling pliers stand.

Adam buys into a tool storage system he calls First Order Retrieval or F**k Drawers. I cannot say I agree with his views. I prefer a more minimalist approach, but apparently I was failing that in at least 33% of my tool chest till space. For a while I had considered just screwing a plastic cup to the wall by the pencil sharpener, but that only addressed a part of the problem.

Then I thought about how my friend Tom Latane stores his scrolling pliers in his blacksmith shop. The stock in my hands was a catalyst and with a couple quick gesture drawings in my shop sketchbook and I started moving forward. 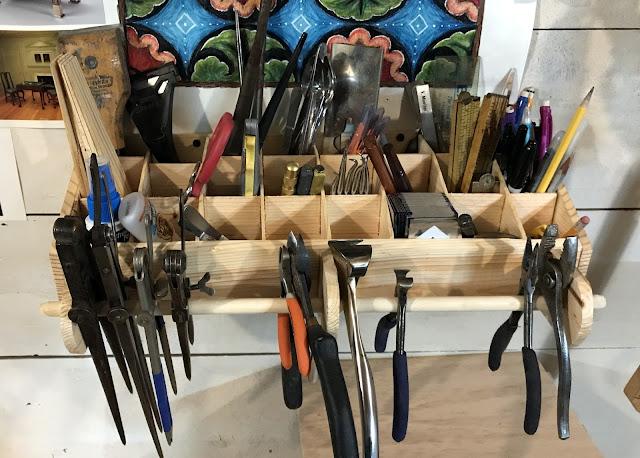 A very satisfying little project, took about three hours sketchbook to lights off. I chose not to break down the build here for a couple reasons. My daughter asked for one of her own right away and I think I can improve on the concept with slightly different materials. Also I want to get better at video: shooting, editing, all the things, and I believe you get better by jumping in and doing it, making mistakes and doing it better.  Since I have another to build I thought I'd shoot my own version of the Tested One Day Build video. That will show all the build decisions and details and should be in the works in the next week or so.