It's easy to forget when you don't have someone of high school age in the house but it was recently Graduation Season and Mrs. Wolf and I were happy to see our middle daughter clear this life hurdle. Two down one to go. We also had one of out God-Daughters graduate and talking with her a little bit before her party Mrs. Wolf asked what she wanted as a present. "Nothing much, just something special."  No pressure there right?

Talking later I told my wife it was no problem, I had made a simple pine dovetailed box with an inlaid walnut racing stripe and ended giving it to another God-Daughter several years ago. I could just spend a day in the shop and repeat the exercise. Looking through the modest wood stash I keep, I couldn't find a nice enough pine board.

I did find a reasonable board of red oak. So I made my measurements, cut the board into smaller pieces and started cutting the dovetails on those pieces. I know lots of people make a big deal out of dovetails and there are plenty of people like me who take them as just another joint to cut. Personally I find accurate mortise and tenons by hand to be more challenging. But sometimes even the simple things are a struggle. 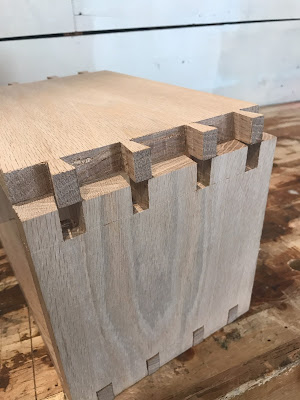 Three out of four corners fit together like the should. Nice tight joints. The fourth . . . .I'm still not sure where I went wrong. A combination of slipping while marking out and flipping the board inside out. I was sure I checked my triangle but whatever. Off by nearly a quarter inch for the center two tails, there's no saving that respectively. Not for something that's a gift. Not for something special.

Back to the stack and I found a small 1x6 by six foot long board of box store African Mahogany I'd picked up for who knows why. It was a bit buried and I hadn't seen it the first time. I did zero documentation of the build, but it's pretty straight forward. I dovetailed four sides. attached a bottom, then rip sawed the box in two parts. 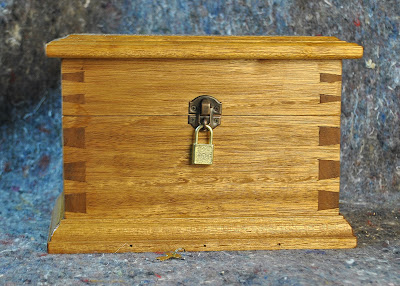 I edge glued a lid with a half inch of overhang all around and used a complex moulding plane to shoot a profile around the edge. I attached it to the top half of the box with pocket screws. 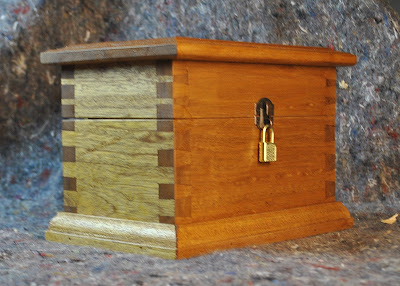 I used a second complex moulding plane to shoot some mouldings I then mitered around the base. Inset and pre installed the hinges which I then removed and finished the box in two halves. 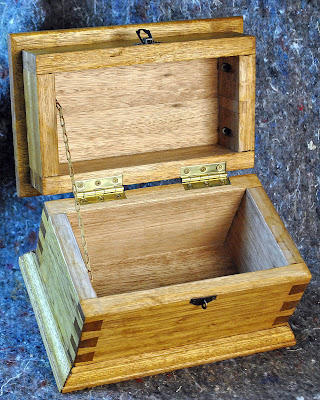 I used a half dozen coats of garnet shellac followed with a dark colored paste wax for the outside. The interior got a good schmear of The Anarchist's Daughter brand Soft Wax. The hinges got reinstalled, and I added a chain and a small jewelry box hasp and padlock to the front. 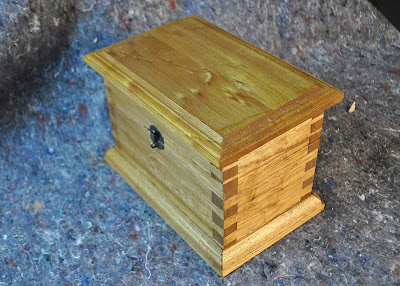 I wasn't able to go to the graduation party and see her receive the gift, but Mrs. Wolf told me there were tears and joy. I guess we hit the mark with something special.