A while back I had the opportunity to do some of the work I've dreamed of. I built a couple commissions for my favorite museum. The Castlerock Museum of Arms and Armor. In an alcove of the basement level there are a few fantastic 17th century great chairs (and one suspicious cabinet) alongside a great display of silver serving platters.

The museums owner wanted three items made. A small pedestal box to raise a very ornate jewelry box up off the carpet. A board he could attach and display several period silver and tin spoons. And a small shelf to display three rare ornate period plates.

There was a little back and forth on the design and getting the color dark enough so he was happy took several tries. But in the end he was very pleased and I have a little feather for my hat. Some of my work is on display in a museum. 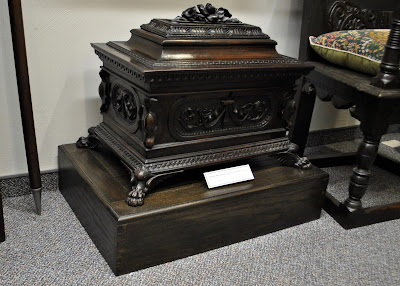 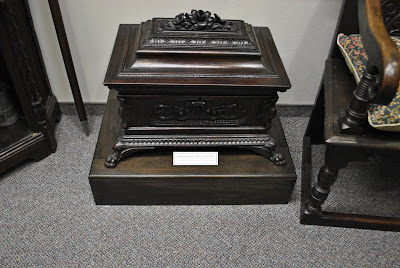 The pedestal was designed to be very understated so not to battle with the delicate ornament of the jewelry box. A short dovetailed box with a lid made of four rails and a floating panel so no warping or cleats should be needed with seasonal movement.

This is a good example of the debate I went through on every piece here. In particular I decided to use a electric router to cut the moulding edge around the top. I figure even on a subconscious level the modern execution will set the pedestal apart from the piece it's meant to display. 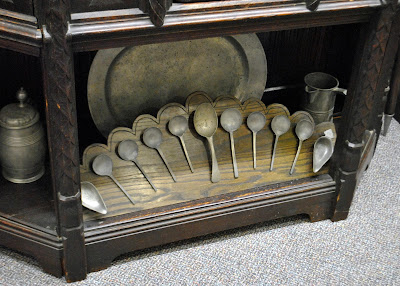 The spoon board was a different design issue. I worked with the director over several designs I wanted to add a little ornament to help offset the spoons, maybe even draw some attention to them. I traced out the mock up fan display they'd done on foam board and stepped off the arches to correlate to each spoon.

After sawing everything out with a coping saw and refining with rasps and a card scraper I went back in with a scratch stock and cut in the shadow line finishing the points with a V carving chisel. 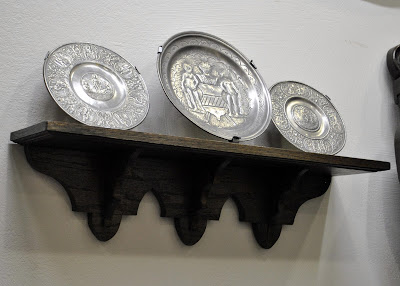 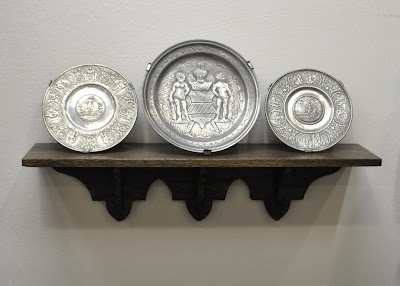 The plate shelf was the most fun. We wanted something that definitely wasn't modern looking. I started this design based on the corbels, (which are difficult to see in these photos) I took theri design from an engraving of a 17th century kitchen scene. 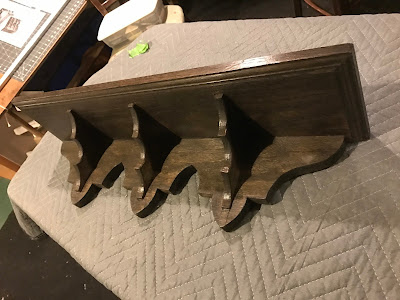 From there I worked out the gothic arch back board with a handcut moulding on the underside of the shelf itself. The whole thing was pretty successful, I wouldn't mind having a shelf or two like this in my own home. 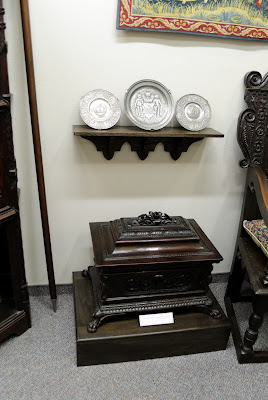 The finish ended up a little complicated. First I layered on some iron buff to react with the tannins in the wood and darken the grain significantly, then went two coats of an "Ebony" oil based stain. I followed this with a half dozen coats of Garnet Shellac which was rubbed down with 0000 steel wool to cut the glossiness. Then a application and buff of dark colored paste wax and I was done. Just finishing these pieces took two weeks and with the exception of the spoon board I got the coloring pretty well on (The spoon board was already edge joined and cut for the museum by another cabinet maker and given to me. Not wood I chose, nor done really to my standards, but you work with what you get sometimes)

All in all a ridiculously gratifying experience I hope to repeat several times more in my career.