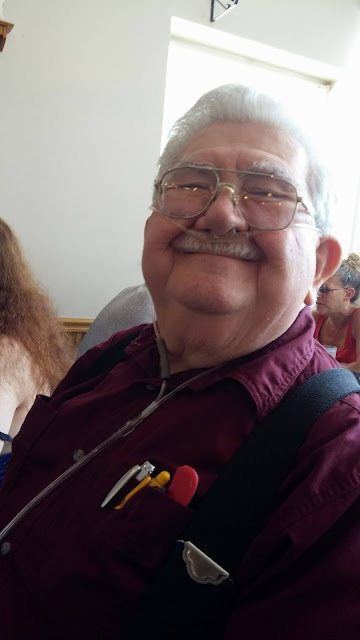 Robert G. Indahl, 81, of West Salem, passed away on Friday, Oct. 27, 2017 . He went peacefully at home with the scent of fresh baked cookies filling the house and his wife’s, daughter’s, and granddaughter’s voices in the air. He was born in the summer of 1936 to Harry and Blanche (Osbourne) Indahl and often told fond memories of growing up on the farm. He graduated from West Salem High School in 1954 and entered the Wisconsin National Guard where he served until 1962.

In August of 1964 he married Karen (Koll) Indahl and so began the adventure of their lives together. Having four daughters and one son made his life full but he still found time for his many passions. He was fond of photography and art, returning to Western Technical College and earning a degree in Commercial Arts in 1992, he was often pestered by his children and later grandchildren to draw pictures for them. He enjoyed camping and aviation, for a time holding his pilot’s license and part ownership in a plane. He liked to be prepared for anything and was known to carry more gadgets and tools in his pockets than seemed possible. He sang in barbershop quartets and in the church choir. He was very active in the church and on the school board and was a long-time member of The American Legion.

Maybe most importantly, over the years, Robert and Karen opened their home and hearts to numerous foster children both official and unofficial. From babies dropped off wearing only diapers to their children’s friends. Many, many called them Mom and Dad. Robert was a man of patience and kindness and will be missed.

He is preceded in death by his parents, sisters Pauline Ardel (Delbert) Wiltsie and Joyce (Leonard) Hemker and his son Joseph.

A year ago when my wife and I bought a new house with my in-laws it was so we could all help take care of each other. Advanced age had made some things difficult for them and we figured our help was better than any assisted living facility. In retrospect I'm glad we, and especially my daughters, had the extra time around them both. Life is inevitably unpredictable, and a short 13 months later we lost Bob due to health complications. The obituary above is one of the most difficult things I've had to string together words for.

And now I find myself at the threshold of another difficult and related task. Bob had decided on cremation a long time ago. But as I sat near Karen listening to the little funeral geek lean into his ash container sales pitch I started to lose my temper. All the selections "tastefully" arranged on the wall were crap. Giant ceramic golf balls and baseballs, gilded vessels of robotically turned aluminum, not one item, not one with soul and heart and the touch of the human hand. We had carefully coordinated the final days of Bob's life with hospice, seen to his needs and arranged to have all his daughters get time with him near the end. We brought him home to his own bed, worked to keep him comfortable as we comforted ourselves. There was human hands, and touch, and love in every decision, every care and every moment. Why should the box that holds his ashes be less considered.

I spoke up before the pitch started. Thanks to the cremation I would have a little time to build a box, a box fit for a human, in the shop where Bob would sometimes sit and watch me work and tell me all the reasons I should find a good radial arm saw like the one he used to have.

My own post-op weight restrictions modulated from 10 to 25 lbs for the last two weeks of my convalescence. Enough to get out in the shop and work if I want and out to the shop I'd go, somehow believing inspiration would just strike me. I had a box in mind but I also had dimensions from the funeral geek for the interior of the air tight, atom bomb proof box my human construct would have to fit inside. I think I was overwhelmed by the responsibility.

I looked at a hundred designs on google photos, and many of them were beautiful and artistic, but the box I was building wasn't intended to carry the burden of shelf display with quarterly dustings. Mine was intended for the ground and the burden was the desire to house a human being's remains inside something made by a human being.

Last night I curled up to my wife and was nearly passed off to sleep when my mind clicked on the image. I could see it clearly, all the joinery, the look, the finish. I could see the construction using some walnut cut from a tree that fell on Bob's childhood home farm. Two remaining boards have followed him for years. He passed them on to me, and asked after them often, but whatever his suggestion, using them didn't feel right until now.

I almost let myself continue off to sleep, promising I'd remember clearly in the morning. My rational mind reminded me that was bullshit. So at one in the morning I found myself sitting in my robe, hunched over a card table set up for all the visiting company and not yet put away, scribbling away in my sketchbook.

Once I had the idea fully rendered I closed the book and went back to bed. This afternoon I returned to the sketches and notes. The thing is there, fully visualized. Tomorrow I head out to the shop with a plan and a purpose. I should have enough to make at least two, a matching one for Karen come her time.

I owe Bob so much. Everything really. Even though I was a loudmouthed long-haired teenage punk dating his daughter, he always showed me patience and kindness, and sometimes turned a necessary blind eye I'm not sure I could. Every decision he made in his life delivered the most important gifts to me. My wife and my daughters. I hope I'm worthy of the challenge. 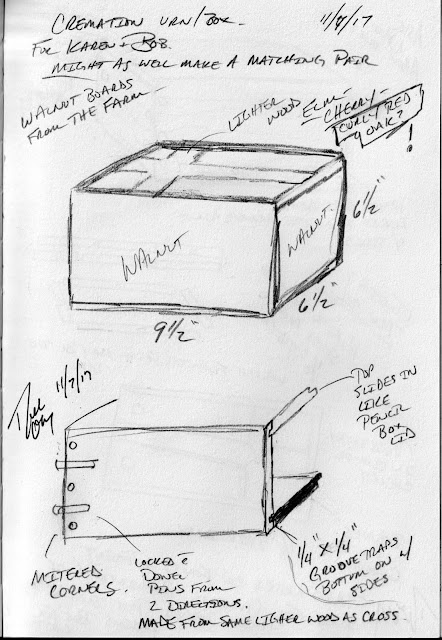 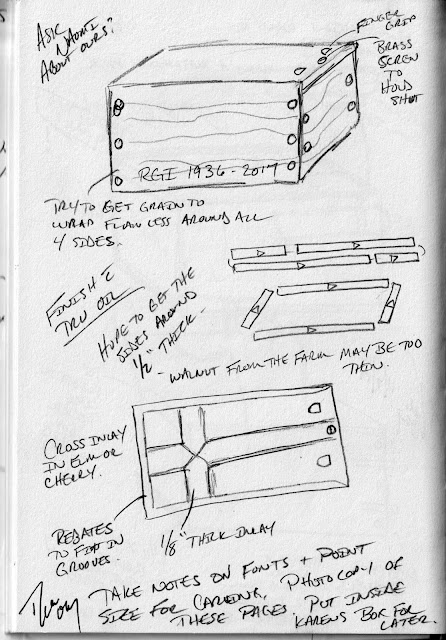