I hereby call this officially unofficial meeting of the International Association of Moxon Vise Owners (IAMVO) to disorder. Before we begin with the important nonsense let us say the customary pledge of the organization. Please rise, hold your dovetail saws over your heart, cross your fingers behind your back and repeat the sacred words.


We who were once hunched in joinery
Can now stand tall in victory
We who were once bound to the bench
Can now cut dovetails anywhere
We have been liberated by Moxon
Lead by the prophet Schwarz
To the holiest of all workholding wonders.
Whether atop our Roubo or on the shelf beneath
Let us never wish for a Leigh Jig again.
Amen

Thank you brothers and sisters, before you find your seats please greet one another with the secret handshake.

What? No you can't catch "Brace And Bit Fever" from a simple handshake, that's a nasty myth. Besides Mr. Abram I'm certain your electron shots are all fully up to date and you're in no danger.

See, we can all get along and play nice. Oops, it seems Roy has managed to cut himself on your beard, well that's never stopped Roy from going on with the show and I suppose we should follow his example.

To the reason I've called you all here. I want to announce we have acquired a new member! Several evenings ago I had the young James Martens to the shop. He'd found a lonely pile of maple alongside a back country highway, oddly already glued up into turning blanks. The maple was cold so he invited it into his warm cargo van, the one with the blacked out windows, and offered it a job in his shop.

Mr. Martens knew I had a lathe and the threading box and tap needed to make a moxon, (Though we all agree how elegant the less folksy options are hailing from Iowa and Texas) and he asked my assistance and I was happy to give it. 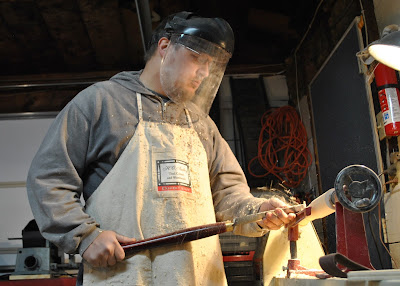 I set him up on the lathe and let him go to town and before the evening was over another glorious miracle of wood mashing mastery was brought into this world and I congratulated Mr. Martens on his new membership to our exclusive club. 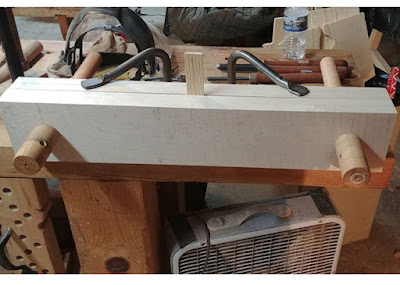 We both held back tears as the vise attempted it's maiden clamping. I am happy to report it was a success.

So, fellow members of the IAMVO, when you spy the young James, whether in the wild shopping for major appliances or at his usual station sharpening and building saws for Bad Axe Tool Works greet him warmly, offer him the secret handshake, and ask how his vise is doing.

I hereby declare this meeting at an end. All in favor?

P.S. This was fun but it seems to me T-shirts and stickers may be in order. If you're interested make a comment or send me an email at oldwolfworkshop@gmail.com so I can roughly judge the interest in such nonsense.   -D
Email Post
Labels: Experiences