The Rrrrrest Of The Story. . .

Does a Paul Harvey reference make me sound old?

Around a month ago a there was a conference I would have loved to attend. It's the annual Working Wood In The 18th Century Conference at Colonial Williamsburg. The list of presenters is enough to make a woodworking geek like me swoon. Maybe some year I will make it to an audience seat, I am certain, though I enjoy doing presentations like this, I will never get a chance to work this crowd in this venue.

However this year, while I sit 1,124 miles away, somehow a part of me made it onto the stage. Don Williams did a lecture about rediscovering the tools illustrated in Andre Roubo's "L' Art Du Menuisier" which he was a big part of translating into english. (Well some of it so far, 2/5ths, Don assures me they're working on the rest.) He wrote about the presentation on his blog over at The Barn On White Run

I was enjoying reading this entry, wishing I had been there, then I looked at the background of this photo of him demonstrating a coopering clamp. 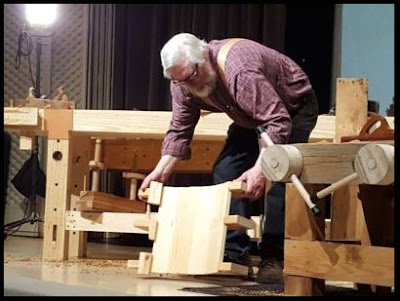 On the bottom shelf of the Roubo I spied an old friend. The Roubo Press Vise I made to publish my first article for Popular Woodworking.

When I realized the notion to build this vise my first thought was, as it was related to Roubo, it seemed like something that should be written about in a publication more than simply thrown up on the blog here. A bit nervously I wrote Don and asked his permission. I understand he doesn't own "Roubo" no one does (or maybe we all do) but I did understand he had a vested interest in those things and it felt like the right thing to do.

He gave me the thumbs up and things rolled from there. I made several rookie mistakes. The first was freaking out when the editing notes came back because I thought they were gonna shit-can the article when it's completely just part of the process, (there's nothing like proving what a rookie you are huh?)  The second was choosing a piece of southern yellow pine as the thick timber for the project. The piece was historical, reclaimed from the floor beams of the Schwinn Bicycle Factory in Chicago which had been built in 1900

Alas SYP is suitable for the clamp's purpose but not nearly a sexy enough wood for a magazine centerfold. I knew the staff was a little disappointed I didn't deliver on an ideal bench fixture. One more lesson learned. Later when I managed to get my hands on some suitable thickness of walnut I remedied the sexyness problem albeit a while too late. 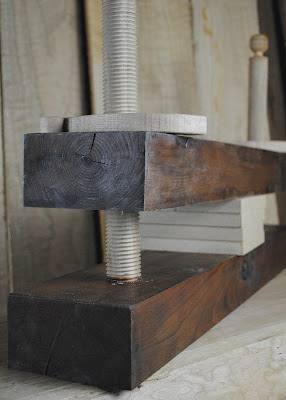 I had shipped the vise to PopWood for them to photograph, but instead of shipping it back to me, I asked Megan to forward it on to Don as a thank you. He seemed pleased with it and I haven't thought about it often until seeing this on his site yesterday, 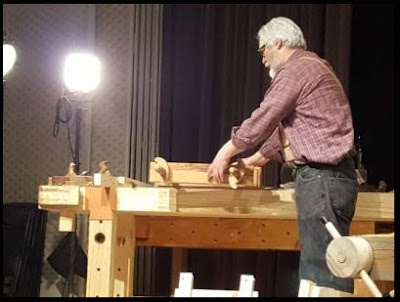 Here he is demoing my work on a stage I'll never stand on. That's just mind blowing for me. I can see him smile as he reads this. Thank you yet again sir.

Makes me wish I'd sent you the damn walnut one. ;)

P.S. If you're curious there's a video I made of the vise in action on the PopWood blog, you can find it HERE.   -D
Email Post
Labels: Experiences Roubo's Tool Chest