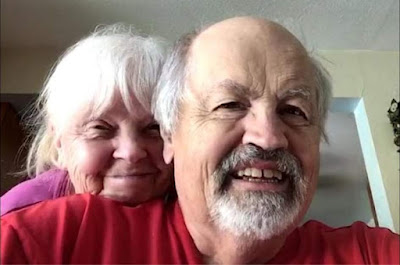 I’ve worked in healthcare since 1994. I started as a CNA, 3rd shift in a nursing home and I’ve worked as a Surgical Technologist since graduating in 1999.

A week and a day ago (2/6) was my worst day at work so far. I’d just started my shift. Maybe an hour in, getting ready to help clean an OR that was finishing an emergent case that started in the early morning.

The Charge Nurse was helping too and when I heard the phone ring in her pocket all I thought was “whelp - there’s gonna be another case.”  Instead I heard her say the words “Derek Olson? Ya he’s right here. Just a second.”

The part of this story I haven’t told yet is that my father was there in the hospital too, admitted for some infection that was proving fairly easy to treat, he was responding well to the antibiotics, and I knew he was responding well become he was supposed to be going home that day. I’d been up to visit him the night before, at the end of my shift. He spoke about how much better he was than last time he’d had sepsis a little more than two years ago. He spoke about how much better he was doing now that he was allowed to have oxygen at home.  He was able to take his concentrator down to his workshop and we spoke about  Dremel bits for quite a while. Because he was working at teaching himself figure carving. He had a fir 4x4 all cut up and prepped to start a figure for each of his grandchildren.

The woodworker in me wanted to talk him out of using a construction grade 4x4 for carving…. The son in me remembered when I was a freshmen in high school and needed a new bed frame - this man built me one  - with a design based on a waterbed frame - out of particle board and 2x4’s - on a cinder block front porch of the house we were renting - using a circle saw, jigsaw, and a drill - in a long afternoon. And that bed lasted me for years and even survived a couple moves.

Who was I to tell him what wood to use. My job here was to sit back and cheerlead and help or answer questions if I could.

I got to tell him I loved him. Said I’d try and stop in during a break tomorrow and hopefully see him before he went home.

Now I was standing in the OR and a voice on the phone was saying “Derek, this is the HOM (Head Operations Manager) I need you to come up to your father’s room.”

“You father. You knew he was here in the hospital right? In room XXXX.”

“Derek if you could just come up here please…”

My team knew my dad was in house, I handed the phone back to the Charge Nurse, “I have to go up to my dad’s room.”

Longest elevator ride of my life and I was met in the hallway by a critical care doctor and the HOM. The doc told me that something happened in the early morning and my dad had been found on the floor just before shift change. They ran a code - because that’s what you do when you find someone down and non-responsive - my dad was already gone.

I swear when I started to type this out I had something to say, a point to wrap up.

It all got lost along the way.

The most difficult thing for me right now is, my dad was someone I could always approach for advise and what he had to offer was always good.  Cut to the bone common sense with just the lightest veneer of sarcasm. His bullshit-o-meter was the strongest I’ve known and he often had a way of working out situations to his advantage.

Right now I wish more than anything o could ask him for advise on how this world is supposed to work without him. I know he gave me that answer. I know it by putting one foot in front of the other.  I know it’s by being here for my brother, my sisters and my mom like they’ll be here for me. I know it’s treasuring my wife and my children. I know it being kind when I can and being grateful. I know it’s not giving up and it’s about doing something everyday. I know that being scared doesn’t mean you should make decisions based on being scared. But god fucking dammit I want to hear those words from him so bad.

I sat next to his hospital bed. And held the hand that used to be his and I wished so many unreasonable wishes and I made some of the shittiest phone calls of my life and then i uselessly wished some more.

I can hear him reminding me wishing doesn’t matter. Life is not fair - it can be just - but it isn’t fair.

I had my father in my life a long time. A lot longer than some people, than many people get.  I got to tell him I loved him and hear him say it back on his last night. We’d spoken about his health, he was scared of a long lingering death. The kind that dehumanizes them and desensitizes their loved ones. He was worried about scaring my mother if something happened, and she wasn’t there to face that trauma and pain. Soon after she knew - we knew - and I had the honor to be the first one there, to be the one to rally the troops, to keep his hand warm until my mom could come hold it one more time.

I’m writing this all down, rambling all this down, because tomorrow I have to write his obituary, at least a working first draft, and I want to talk about his life and not muddy it up with all this shit about his death - because his life was important. It was important to me, to siblings, to his grandchildren, to his own brother and sister, holy shit the list could go on and on until it tops with how important he was to my mother.

I remember growing up thinking it was so corny that my parents were high school sweethearts - then I went and married the girl I was dating in high school. He treasured my mother. The last thing we know for sure he did on this planet revolved around her. Late at night, to late to call, he wouldn’t have wanted to wake her up, he sent a message wishing her a happy birthday (he’d been admitted two days before on her actual birthday) He said “I won the lottery. Happy Birthday. I love you.”

No dad. We won the lottery.