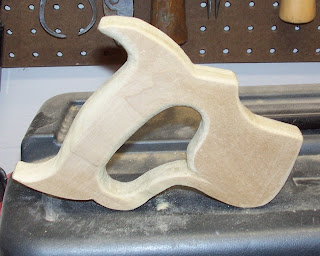 Well I finished the day with a saw sporting a nice wooden handle. . . We'll see how long it lasts. . . but I learned quite a bit anyhow and if I have to replace it. . . well I won't be able to make it such a production the next time will I? 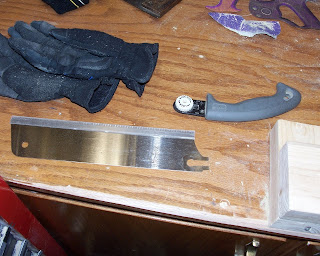 To start this post though, I did finish shaping the Disston "D" handle, complete with the little detail that makes the bottom of the handle look like it's wrapping around and rejoining the wood. That being done, I decided to move forward on joining the sawblade to the open handle. First was taking the old handle off. Not difficult as the handle was designed to remove. Then I lined up and cut the end of it square. The saw will never fit on it's old handle again, that begs the question of what can I do with the old handle???  maybe something will come to mind in the future... got any ideas feel free to comment them. 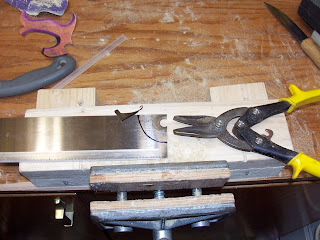 Used a pair of aviation snips to cut the blade square, then I filed the cut smooth. The black curved line is where I intended the handle to end up. I then clamped the new handle into the vice and using the thinnest kerf saw I own. cut through the head of the new handle to the right depth, about even with the flare on the top. (You'll understand when you see the pieces fit together further down) I then test fit the saw together. and here is where I made what may, or may not turn out to be the fatal flaw... (builds the suspense) 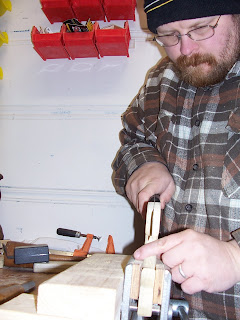 Damn the saw looked great, I could just about feel how well it was going to work, even better than the crap plastic handle that was there before. I was eager to join the pieces together, maybe too eager. I did not have any of the flat head, split nut bolts, that saws traditionally use, lying around. What I did have was some wide head copper rivets. I decided I would drill the holes in the handle and blade to accept the copper rivets and get the saw together tonight. 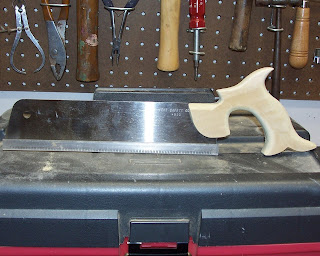 Now is where I should mention that I am not, by any stretch of the imagination, an expert in riveting. I have them for some leather working I have done and an antler hair comb I made once as an experiment. What I wasn't thinking of when I decided to use them was that the underside of the rivet heads have a slight cone shape to them... I can hear that some of you are already figuring out what happened.
I drilled the holes in the handle and the sawblade... I have to admit I abandoned the hand tool frenzy for this part. Relying instead on the trusty cordless drill and an 11/64th drill bit. I then used a 1/2inch forstner to recess the holes to allow the rivets to have room to peen over. 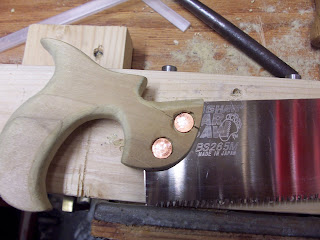 As I was peaning the end of the rivet around the burr, I was also driving the cone on the backside of the head into the wood, effectively driving a wedge into the grain, and causing it to split. Not a bunch and not completely, but enough to weaken the saw while it takes the pressure of cutting. If I did nothing to help, it wouldn't last long and I would be starting from square one again. Not that I might not anyhow, and learning what I have I won't make similar mistakes again, 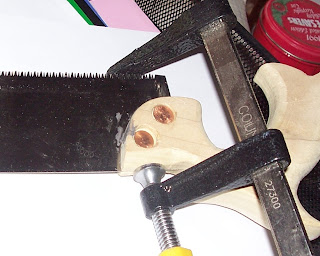 But what to do this time around, again I had to dip into my not so period stash of tricks, modern wood glue would not be enough, not strong enough. But I always keep some JB Weld in the tool box. It works great for making jigs or repair, the stuff is damn near indestructible. I even used it to repair a crack in a radiator once. So I broke it out, pushed as much as I could get into the crack and placed a clap to seal the crack in place. Only time will tell how well it holds up, but I guess I felt like I had to give the repair a shot. I'll let it dry a day or so, then give it another test go and see if it will hold.

If not I really don't see how I'm out much. I can make another handle, and I'll be able to be more careful about attaching the blade from here on. The awesome thing is both how the saw looks and how it handles compared to the handle it had before. So today being my last day off until Saturday. I will see how much I can accomplish but as always I will continue to update mywork here.
Email Post
Labels: Saw Rehab