My wife picked me up after work tonight and said "We need to go get milk while we're out." OK . . . so off to Wally World we go. Somewhat to get milk, somewhat to just waste some time outside of the house without the kids in tow, just the two of us. Inevitably we always gravitate towards the books and magazines to hang out for just a bit and see what’s new. As always I walked over and checked out the woodworking mags, and was very disappointed tonight as the only two related ones on what looked like a recently restocked shelf was "Fine Homebuilding" and "Popular Woodworking"

Now I like Pop Wood, I would have to call it my favorite of all the magazines out there. I have perused the new edition a couple of times before, but there's not a whole lot in this edition that speaks to me and says "you must buy me you fool!!!!" I'm not talking against the quality, or the new layout, both are good. I just have to have at least one big article that screams to me before I buy a copy of a mag anymore. They just didn't have that this time, but that doesn't mean I'm not going to sneak a couple minutes of free reading if I can.

Tonight I read a great article in the very back of the mag. It was written by Christopher Schwarz about the influence of Norm Abrams on woodworkers today. If you haven't read it yourself, either buy the mag or steal a few minutes of time in your local Wal-Mart. It's one of the first great tributes to the good things Norm has accomplished in his years teaching via PBS.

Norm, the ultimate gateway drug to the crack cocaine that woodworking can be.
OK that might be a little strongly worded...
OK maybe more than a little.

Anyhow, through this article I received some personal justification that I might just be moving along the right path. I look up to both Mr Abrams and Mr Schwarz, and I respect both of their skills and through reading what they've written or said, I also can say I respect both of their philosophies and opinions. Chris's attitude on woodworking, and the way he can wrap the philosophy and unspoken meaning of the soul into the sweat of the work. . . well it makes it easy to buy into what he says, and I also think that he carries the integrity to shoulder that burden. Who knows what he'd say if he read this. . .

After the article finished reviewing the contributions and evolution of Norm, Chris began to talk about personal experience, saying the only plan he ever purchased from the New Yankee Workshop is the one for the Dominy Clock. He believes, as Norm obviously did, that this is a quintessential piece of American furniture, and he even has it in a place where he can see the plan every day, just to inspire him to await the day when he'll have the chance to construct his own version.

One thing we did have living in Maine was a DVR. I loved the thing, and I rather miss it. I had set it to record every New Yankee Workshop and Woodwrights Shop it could find. Most of the time after I lazed away on an early Sunday evening, catching up on what I'd missed earlier that weekend, I would delete the program, taking the lessons or information and logging it away in my brain. But I never did delete the Dominy Clock program, In fact the device went back to Time Warner with the program still lodged in the memory. I must have watched it 50 times if I watched it once. I have seen a lot of Norm over the years, but there was something about this project. I built a few small-scale models from cardboard to figure proportions, paused the program to scale the piece next to Norm's tall frame, judging distance by seeing how his hands stretched across the piece. I dissected every cut and move the program made.

We had decided to move. I had to start packing up the shop; I had of course begun to work on parts of the clock in-between other projects, wanting to take my time. Now it was down to crunch time. I could abandon the work I'd done and revisit it in the future, or I could kick myself in the ass and finish it. Start to finish I managed to build the clock in 3 days. No finish sanding, no finishing stain or protectant. Then warts and all it went into the moving truck. It's sitting here in the living room, awaiting its finish sanding, awaiting its quartz movement, awaiting the redoing of the lap boards on the back. Some putty for the nail holes, and the eventual rosemaling (I know a person who does a knockout job on it). Overall it was one of the most favorite things I have ever done and has actually inspired me more than most other pieces I have done.

I like to build chests and boxes. They are kind of my thing. Large joinery, dovetails, through tenons. I don't enjoy cabinet making as much, I'm not studied enough for chair making. I do like doing larger case pieces, but I also like details and careful proportions. In the clock, I think I might have found a perfect storm for my methods of work. Case joinery, dados, big pieces that make a statement but don't have to be the center of attention. Since building it I have thought a lot about how to refine it, expand on it, take what I've learned and create other clocks. I have looked into the market for tall case clocks to see if it’s possible to make a living today like the Dominy brothers did back in the day. I definitely think that if I ever become anything as a woodworker then tall case clocks will be a signature for me, like the Mastermyr Chest is already for those who know me.

The validating thing is for me to be having these thoughts for a while, triggered by Norm, and now validated by the writing of Chris. If you have been on the road for a long time and you cannot see your destination through the mountains in the way, it's good to hear someone who has walked the path let you know you're headed in the right direction. Even if on the vaguest level my thoughts are along the same line as these guys, then I may just turn out OK after all.

But then again, who is it that defines just what "OK" entails??  The world may never know... 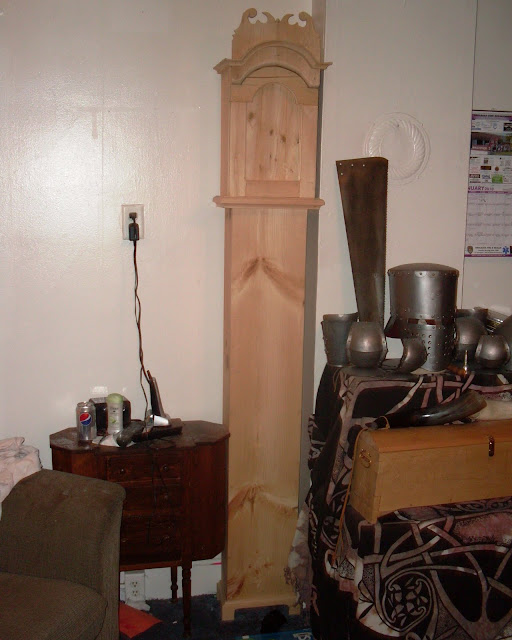