Ladies and Gentlemen, we are all out of sandwiches here in the Oldwolf Workshop, It is time to move past that course and on to the prime rib! 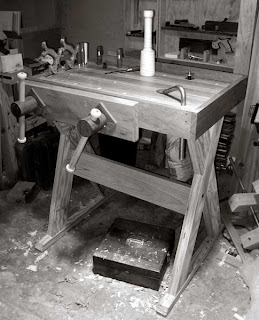 I refer of course to an odd kind of sandwich making where you laminate two-by boards together, face to face, in multiple stacks, bigger, and bigger, and bigger until you have one solid block of laminated board that will create a very effective and solid top for a workbench. This is the second time I have created such sandwiches. The first was for my full size workbench, a twisted genetic mutation combining the Nicholson Workbench and the 175 Dollar Workbench (both from the stylings of Christopher Schwarz, the god father of all modern made workbenches) This time I am doing it to build a smaller foot print, but taller Joinery Bench, after the stylings of Tim Williams at the Bench Vice Blog. 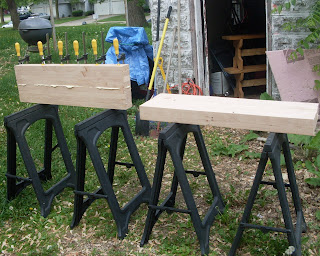 The sandwich making process can be kind of a slog to work through, but it gets more interesting as you move along. You start with boards roughly a 2x4 in size. Oh, please let me interject some advice here. Mr. Schwarz states that he prefers to use 2x8 and rip them in half to make his own 2x4's and I highly recommend the same. The first build I thought bull, I can just pick the best 2x4's in a pallet and I'll be ok, and I did get them to work well but it was more of a struggle. For this build I listened to the man and ripped the 2x8's in half. The boards I had were so much better and stable. I should have listened from the start. 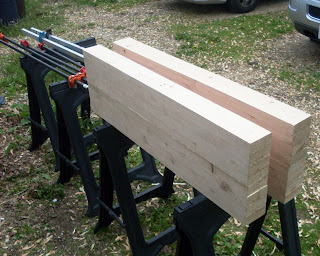 Anyway, the 2x4's get cut to length and jointed. For the dimensions of my version of this bench I decided I wanted a work surface around 24 inches deep by 40 inches wide, so 16 2x4's cut at 40". Then you start the slow process of the build, First you glue up pairs, then the pair get glued into sections of four. I stop here and flatten the blanks again. Then stacks of four become stacks of eight. Which is where I was when I started this morning, and this is where it gets a little exciting. 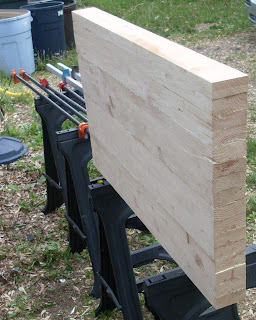 Now don't get excited, this is not "hold on to your seats, we're going over the waterfall" exciting. But in comparison to the rest of the glue up, this part gets top billing. See I have a pretty decent collection of clamps in shop. Enough to get me by on most occasions, but I do not have enough clamps to go crazy and get it all done at once, so the glue up goes in stages for me, The first pairs go two at a time. with at least a four hour cure time for the urethane glue I've been using, that means in the beginning I get four pairs of glue ups a day, equaling 2 days spent on the start, Then moving to stacks of four, still I can get two at a time, so we are at a day there. Going from stacks of four to stacks of eight is one at a time . . . thus another day. So four days in the shop with a lot of down time, and that makes the balancing act that is gluing the fairly heavy stacks of eight together seems riveting to me. 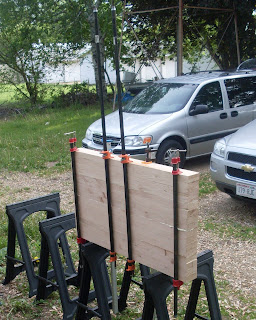 And the time was finally here. Blanks set. Glue applied. and the lift was on. For all the problems I always anticipate doing this maneuver, so far in my career it has gone off smoothly. The anticipation of problems often renders such thing null and void so I managed to get things aligned and the clamps applied with relative ease. I pondered leaving the glue up vertical but decided I was probably already taxing the poor plastic saw horses enough as it was. 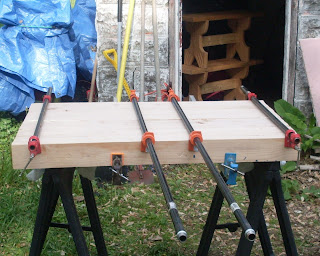 I used a couple of plastic Wal-Mart bags as a prophylactic to keep the squeeze out from attaching the glue up to the horses and laid the sucker down. Man she's got some weight, which is good for a bench but I do want this to be portable so I can travel with it for exhibitions, and I haven't even added the hickory trimming and vise yet. Oh well, I still think heavier is better.

So all that's left now is the perpetual woodworker's question. "What trouble can I get into while I'm waiting for this glue to dry?"