I have spent the last several months collecting, restoring, and teaching myself to use hand tools better. Now I am working on a couple projects using those hand tools exclusively. The first project I finished was building my take on a pair of traditional saw benches, or saw horses. You can follow that odyssey here if you like. Now I am in the beginning stages of building a specialized Joinery Bench for myself based on the one built by Tim Williams over at the Bench Vice blog. I am making some modifications so it will fit me best of course, raising the height and making the bench top a little bigger.

But the cool thing about working my way through is taking tools I have rehabbed and getting them to work again. And getting them to work well is so freaking gratifying, there are almost no words. The first tools I started rehabbing were my saws, and I really got to work with a new skill to start the bench by ripping several 2x8's in half to make the boards to build the lamination's for the bench top. That was exhausting work, but the saw I worked so hard to learn to sharpen, joint and set the teeth, it cut wonderful, followed the line and moved the saw dust out. I'm sure in hands that would have more stamina those boards would have fallen to the side in short order. For me it took a while, but again, I was the limiting factor. 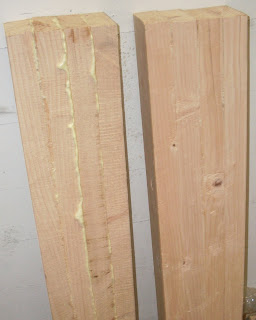 Tonight I really got to dig in to working with my planes. I had used planes for several small, odd jobs in the past, shaving a joint, cleaning up the sides or rounding board edges, but I have never yet used them to completely resurface a board. In a previous life I would have found a way to use a power tool to do the job, probably the table saw, (as I didn't own a power joiner or planer when I had the full shop set up) Tonight I found a new joy, and I will use it whenever I can in the future.

I had pine boards sandwiched four thick, glue dried and cured. And as you can imagine, with hand ripped boards there are variations in width, Not major but enough. I pulled out the Sargent #5 that I spoke about restoring a while ago (if you want, read about it here) Since I have a good Stanly #5, when I sharpened the blade I lightly cambered the Sargent, so it would work well in thei situation where I need to remove a lot of material. Not as cambered as a true scrub plane, but just enough to work, and it worked well. I worked up a sweat but the boards flattened nicely. 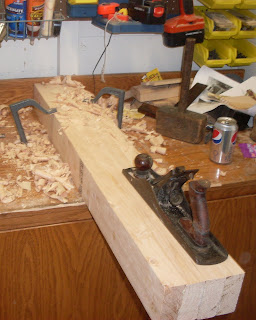 I had to come up with a little bit of an interesting technique to hold the boards in place, (the wood shop jr, strikes again) and even though I had to attack the board from one end and then flip it to get the other, things evened enough for this stage of the game. 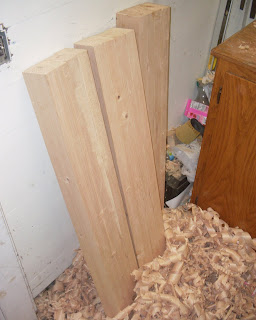 I must say that it is very satisfying standing ankle deep in wood shavings. I'm not sure why exactly, maybe the simple evidence of hard work and a job done well, but whatever it is it's difficult to replace. I always say I love making sawdust, but I think that making shavings is so much more fun and satisfying,

More good time in the shop tomorrow but that's all for tonight.
Cheers!