Damn, Now I Have To Make Up My Mind 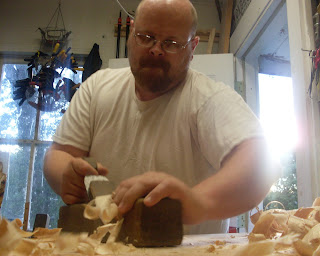 I have discovered that the quiet shop and the whisk and sweat of a handplane can be good for doing a lot of thinking. Thinking is a dangerous thing and I believe you should try to avoid it as much as possible. It will generally only lead you to trouble and dilemma, exactly where I find myself sitting tonight. Though I think in setting myself up for this blog entry I have seen some rays of sunshine. 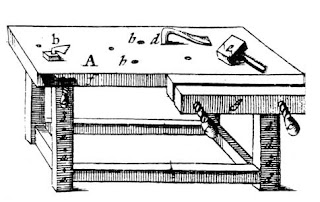 Often it is better to be lucky than good, and luck for me this time means that I am building a small workbench / joinery bench for use at traveling hand tool demonstrations at the same time that a rather good size discussion about period workbenches has popped up about the woodworking blogs, importantly involving a couple of woodworkers who I happen to really look up to, and maybe quietly hero worship a little, Chris Schwarz and Peter Follansbee. The discussion related to the twin screw face vise depicted by Joseph Moxon in his 1678 work titled "Mechanick Exercises."

Most involved in the discussion speak about how the face vice cannot be actually part of the bench, and I have to agree it looks out of place and bulky, and it would obviously be very much in the way of the harder to see, planing wedge vise on the front left of the bench. The alternative thought is that this vise is an accessory piece that can be added or removed from the bench, like a bench hook.

I admit I am a simple man and would probably just accept the picture as it has been accepted for a while, as gospel. I was kind of excited to finally create one of these vises for my new joinery bench. Then I got to reading. (sigh)

First it was Peter Follansbee's entry about 17th century holding techniques. He talks about how he uses hold fasts for the lion's share of his holding, but he admits he does not do a lot of dovetail work. Something I very much enjoy and something a twin screw vise excels at. This posting was I think, inspired by Chris Schwarz posting about adding a planing wedge vise or bench screw, to his new Roubo workbench (read it here), This article got me excited about the style and I was trying to play with how I could also add this vise to the joinery bench, and perhaps to my bigger Nicholson Bench (along with accompanying deadman of course).

Then, last night I read Chris Schwarz's follow up on the twin screw, and I knew things had changed for me. He showed a very viable, and believable way to construct the vise as a separate accessory and attach it to the top of the bench when needed, (I do not want to just pirate the pictures of the set up and post them here, I walk a already walk a tightrope when it comes to that practice, just follow the link and read his post, once you see it it makes so much sense) Now I had some decisions to make, and none to soon as I was moving towards starting on the vise soon.

These posts have made me do some rethinking on the design of the project. If I remove the twin screw vise then I remove a major design element and I feel more free to change some of the rest of the design to. I spent the whole day dwelling on the issue and I have came to some decisions. I am basing these decisions on the fact that I am using this bench to do demos of Medieval woodworking, so I want my bench to be as old and document-able as possible, therefore I am doing away with the attached twin screw vise, and instead constructing it as an accessory that will attach to the top of the bench for when I need to do that kind of joinery. I will instead install a planing wedge or bench screw style vise. With this I can go most of what I desire anyway. built well enough I could probably even do some dovetailing with it . . . we'll see. I am going to drop the height by several inches to better accommodate that additional height of adding the twin vise to the top of the bench when in use.

I am also going to change the geometry of the legs. I very much like the "X" pattern used by Tim Williams (whom I borrowed the original joinery bench idea from) but with it I cannot utilize holdfasts as additional upright fastening systems like Mr. Follansbee shows in his post (see here) so I am  going to rethink those as well, probably to a more straight leg design on what faces me and a canted out angle on the backside of the bench.

I was playing with all these ideas when I started getting this post together and I found something that helped me make up my mind. In early 2009 I was not involved in blogs at all, I didn't write one and I didn't read them. So unfortunately I missed a post by Mr. Schwarz on an early 17th century Swedish joiner's bench, recovered from a shipwreck. A reader called " J Rayner" posted it in the comments section of Mr. Follansbee's blog. (Thank you J Rayner for posting this so I could find it!) 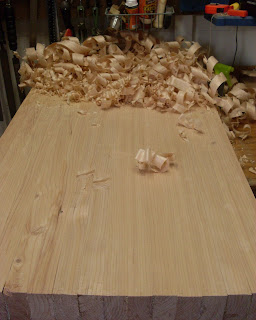 Carrying my Norse heritage with me on this medieval adventure I was instantly intrigued, and once I saw the picture, I knew that was the way I had to go. So a few more shop drawings to do tomorrow, and this weekend I can get working on making a huge dent in this piece. provided I can ever get this top flat, but that is another travesty for another day, until then