When I think of Texas I have to admit some things come to my cartoon fed imagination, right or wrong, there they are. I envision ten-gallon hats and fancy cowboy boots, I think of the comic book of the Alamo I read to tatters as a child and of ZZTop. I think of cowboys sitting in a group around a campfire, eating large quantities of beans and releasing large amounts of methane and other green house gasses from inside their Levis (a la Blazing Saddles) and a president who spends his vacations clearing brush with a chainsaw infront of a crowd of reporters, (why you would stand there just to watch a dude run a chainsaw is beyond me). The legends of Texas are bigger than life and make this poor Wisconsin boy, who has never been further south than Kansas, think of things like independence, tenaciousness, and a distinct air that says "You can't mess with me. Do you know where I'm from?"

Though if I think about it rationally, away from the legendary stereotypes, I'm sure Texas carries the same varriety of humanity and experiences that I have come to know in Western Wisconsin. But I have a new argument to add to the stories, not a tale of independent spirit, or of overwhelming bravery, but a tale of open friendliness and generosity. David Kirtley is the man who has shown me the other side of Texas.

David was one of the first guys to find my blog and make regular comments. He always has some good additional advice or gives a nice turn of perspective on what I'm up to. Through this blog and eventually through emails, we have developed a fun and easy banter. I look forward to hearing from him and seeing a comment from him sitting in my moderation in box always brings a smile to my face. But recently he had the chance to take me by surprise.

I had made a blog post about turning a couple of spindles for a local entertainer to use as fire sticks. David replied in the comment area that he had also been out in the shop, playing with a new metal lathe, and turning some pins that hold the blade in a bow saw. Ribbing him a little I asked if he could spare a set. Well my jaw hit the floor a few hours later when I got an email asking for my mailing address. So what would you do? I sent him the address.

A couple of days later he sent me an email titled, "Hey, just thought I would torture you" which had a tracking number, I went to UPS.com and plugged in the number and the package was closing in on me, but closer inspection of the page told me it weighed more than 11 lbs. There is no what two little aluminum pins would make up a weight of 11 lbs. I was out to dinner with my family when the email got to me on my phone, and my wife immediately said "You look like the cat that ate the canary. What did you do?" She loves and trusts me so much.

A couple more emails back and forth and I knew David had gone and added some extras to the box, he wouldn't tell me what though. I didn't pry too hard, I was enjoying the surprise. Its been a long time since I've had a Christmas as good as this. A couple more days and I had the box in my hands and I was not disappointed.

Three thread boxes, two face turning plates and a tool rest, a butt chisel, a mortise chisel, a 3/8ths" chisel, four gouges, some in canel some out canel, a smaller stanley trisquare, a couple small blanks of Texas Ebony and a small block of burl.
Oh ya there was also this: 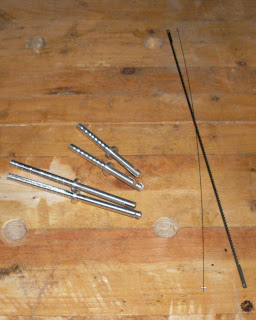 Not one but two sets of turned hardware for building a bow saw and just for good measure a couple of Gramercy Bow Saw Blades.
There is no way to say thank you enough for such a gift, the best I can hope to do is to pay it forward when the opportunity arises, but just once more for good measure. David, Thank you sir.
Just one more quick note, I know there has been a space here for a few weeks that I have been unable to post, heck I've been unable to get to the workshop either. (The withdrawls are starting to set in, I got the sawdust shakes) I've been in the process of moving my family and I into a nice new apartment, (new construction even) and it has been slow going, but we should be all the way in by this weekend and I'll be back into the shop by the start of the week after. So life will be returning to normal soon, Thank God,  . . . Or as close as it gets around here.
Cheers
Oldwolf
Email Post
Labels: Experiences Tools