All sane and logical
I want to tear it off the wall.

It's a game we play a lot at work. Pandora radio plays in the background and while we are going about our work and someone will decide to play Alex Trabec and ask "OK, so who sings this?" Actually it's kind of a game to pick on the younger crowd and those who don't know their classic rock artists very well. (though one of our orthopedic docs still owes me a beer for knowing some of Nick Drake's songs) But in honor of the next project on the table I'm going to play the same game, with a theme related to the piece. I will give the name of the song and the band at the end of the article.

The subject is obvious of course, I'm talking about a clock here, not just any clock though. This is an Oldwolf Workshop version of a tall case clock that currently lives at Winterthur Museum in Delaware. I have never been to Winterthur (though I would very much like to one day), but through the power of modern technology and the beaming of television waves across this country, I was able to be given a very limited and specific tour guided by Norm Abrahms himself.

Norm introduced us all to a great piece of American furniture in the Dominy Clock. It was built around 1821 by the Dominy Brothers, who not only built the housing for the clock, but cut the gears and inner mechanisms and springs as well. Once I saw this episode I was hooked. I DVR'd it and must have watched it fifty times if I watched it once. I never ordered the measured drawing, I carefully studied the film, pausing it to see how far Norm's hand would stretch across a board to get the proportions and making height estimates based on Norm standing next to the finished piece. I built 1/12 size cardboard models to get the proportions of the bottom to the bonnet correct. I sketched and re-sketched all the details.

I admit in the end I scaled down the size of the clock to fit the materials I had on hand at the time. I believe the real Dominy Clock is much taller and broader, but I am happy with the way this one worked out 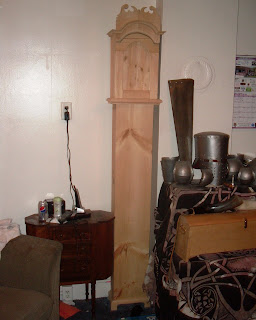 When we made the decision to move home from Maine, I had only had the chance to get a start on the build, and I had to make the decision to finish it fast or scrap the start. I kicked into high gear and finished the clock in 3 days. You can read more about that experience in an older post of mine HERE.It wasn't sanded or finished at all, now it's time to do that.

The only apology of this whole thing is I have absolutely no photo documentation of the build itself. I will show what I can of pics I was able to take of the finished piece. Admittedly shortsighted, I was just in too much of a focused hurry at the time. 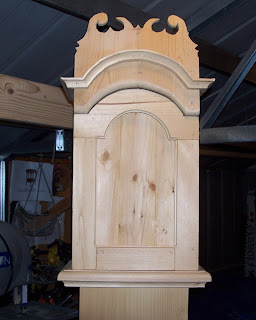 A closer look at the bonnet of the clock. In the end I made some construction decisions that I am positive were different than both the original and Norm's recreation, but I suppose there are reasons to buy the measured drawing instead of pirate the process from the television show. In the end the piece worked well together and that's what matters. When I build this piece again, and I will build this piece again, I will have the opportunity to both document the process better, but also to make some different decisions about the finer points of the construction, and I'm looking forward to that.

Here is the clock in the shop and waiting to be finished. The series on this clock will be a little retrospective on the construction, but will mostly focus on the finishing of the piece, and some particularly interesting decisions I made with the face to deal with how severely oblong it is.

Oh and the music trivia from the beginning... Eve 6 - Inside Out. That was an easy one, the next one will be tougher.