Well moving has its challenges doesn't it? Still no internet access at the home front and the tethering app I was using with my phone suddenly decided to stop letting me access secured sites, so that leaves me going to free wifi spots for the time being. But that's OK because it has led me to discover the LaCrosse Public Library, which is a great building, comfortable to work in, and has a boat load of woodworking and antique furniture books, I'm a pig in hog heaven here.

Last article I spoke a little about the tools that were included in the old tool chest given to me by my Father-In-Law, brought over from Norway in 1865 by is great uncle Melvin Indahl. For more of the background you can catch up on the story by clicking HERE. This time what I want to do is go over the actual chest itself. 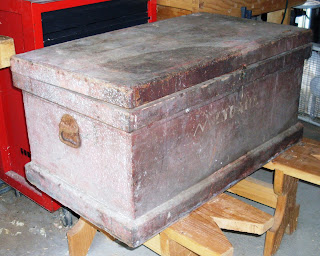 Well here she is, all the way from 19th century Norway. You can see the mileage on her but in my humble opinion, that just makes her all the more beautiful. Color wise it's almost a purplish red, and its difficult to tell if it's a stain or a paint, I would vote paint, but its very well adhered to the wood, no real flaking or cracking. It is worn off in places but that should be expected. The front has "M. INDAHL" painted on the front. The INDAHL is from a brass stencil that I know is still in my Father-In-Law's tool cabinet, but the M was painted on. a lot of the chest is covered in a splattering of white that looks like over spray from some type of painting. 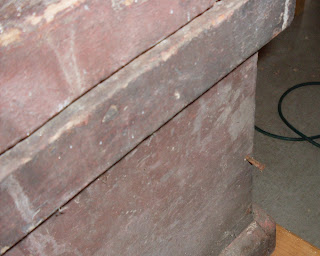 Melvin was a carpenter, not a joiner. There is no fancy joinery on this chest to speak of. The boards are all butted and nailed. The outside case is nailed with cut nails, This one was loose and was sticking out a little. I tugged a bit and was able to pull it out with my fingers. I took a few pictures and then hammered it back homewhere it again wedged tight. 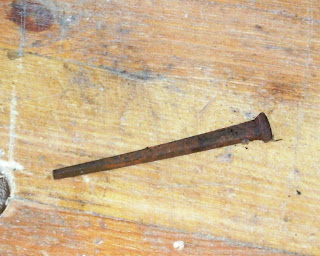 Being a big fan of the book "The Joiner and Cabinet Maker" it was really cool for me to see the cut nails used in the same way Chris Schwarz spoke about. I only wish there was an example of nail clenching on the chest. Overall the construction makes me think of the simple pine packing box that was the first project Thomas made in the book. There are other round head nails used elsewhere in the construction as well. 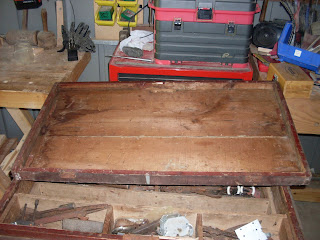 The lid for the chest is not connected by the hinges to the base. and the screws that held the keyed lock into the lid have been stripped out of the wood. It hadn't occurd to me until now to ask how long the lid has been free like this. I know Bob (my father-in-law) said he has the key somewhere in his tool cabinet and that he'll pass that along when he comes across it. 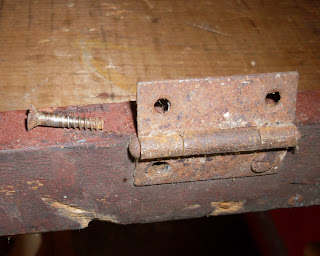 It looks to me like the hinges had half the screws removed, maybe to gain access to the inside of the chest. I'm not going to really speculate on this, I've locked my keys in the car before too and broken in with a well bent coat hanger. Life happens. What I was curious about was the screws themselves. I remember watching an episode of the Woodwright's Shop and hearing Saint Roy talk about a specific date in the 1800's when almost over night the whole world seemingly changed over from straight threaded screws, like the one I was able to back out of this chest, to the tapered screws that we know and use today. Maybe some of my readers will remember this date or more specifics about it. 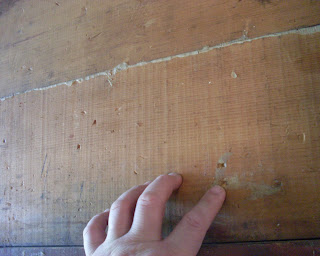 The nice thing about the underside of the lid is you can get a good look at the wood. The chest is constructed of some kind of conifer. Definitely not the white pine I'm used to in Wisconsin, but ma spruce or something of the like. It's a hardy wood, that doesn't really scratch or dent overly easy but it is really pretty light weight wise. I realize it has had many years to dry but it is close to on par with pine chests I've built of similar size. The boards were probably dressed and smoothed on the outside of the chest, but inside you can still see the rough marks of the sawer on the wood. Again I can only speculate here but the saw marks are for sure froma straight saw blade, not a circular one, and they are pretty uniform and at almost a right angle to the board which makes me think of maybe a steam powered bandsaw as opposed to a pit saw and a couple of hard working gentlemen. But now that I think about it I have never had the chance to see the saw marks left behind by a pit saw, but I have seen pit saws and I think their courser blades would not be this regular and fine.

For those of you unfamiliar with pit sawing Peter Follansbee has several excellent posts about the process over at his blog "Joiner's Notes" but here is a link to my favorite one that also has some video with it. (CLICK HERE) 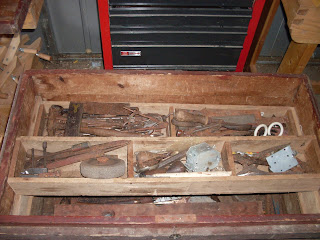 Inside the chest there are two simple trays or tills, again butted joint and nail construction. They fit tight in the chest and ride on rails built into the sides. The whole piece makes me think. Here is a chest that hasn't been babied at all yet has survived 150+ years. It's made of a pine and butted - nailed joints. It makes you wonder sometimes if all the work that is put into some joinery techniques isn't a bit of overkill. Would dovetail joints, dados, mortises, and tenons have improved this piece? Extended it's longevity? I guess that's a tough question to ask. I cut joinery because I love to cut joinery, I probably don't need a better reason than that. 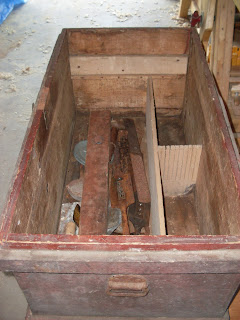 Below the sliding trays is a larger open space and a divided till section to hold the hand saws. I believe that this area would have traditionally held several wooden body planes among other, longer items. The saw till was made to hold 9 saws, an odd number unless that is exactly how many Melvin owned at the time. I got six saws with the chest, makes you wonder where the other three have gone... 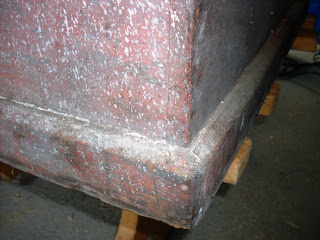 A close up look at the base molding. I don't know if calling it base molding would be completely accurate but I'm certain that this wrap and the one the lid rests on are the big reasons this chest has held together for so long. Notice how the location of the butt joint is alternated between the side board of the chest and the molding. Here you can also see the use of some round head nails instead of cut nails. 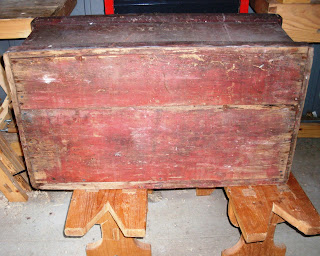 And here is the side almost nobody ever looks at, save a woodworker. The base has taken the most abuse, understandably so. It got a good soaking with a water leak in the storage a year or two ago and the base finally fell out of the chest. Bob reattached it in place with some screws. Again assembled with no muss or fuss, just a couple boards nailed to the bottom and hidden with the wrap of the base molding.

I cannot justify leaving this piece in my shop, It is just too much of a family heirloom to let it continue taking abuse here. My plans are to start constructing a replica of this chest, with modifications done for my tools and some just to make me happy. I will be using dovetails and dados and mortise and tenons and maybe a few other tricks. Once the new chest is done, this one will be able to retire comfortably with some of the other antiques in our home.

Before I go for the day I have one other very exciting note. Matt Vanderlist over at Matt's Basement Workshop has added the Oldwolf Workshop to those who have contributed to his very popular "Spoken Wood Podcast" To be included in such company along with other bloggers and woodworkers I very much look up to is a very humbling experience. This is my first go at recording my own voice reading one of my posts and there was more of a learning curve to it than I initially thought so my hat is off to those who do that recording, podcast work often. If you haven't, go take a listen to my entry at Spoken Wood Podcast no. 79, and if you haven't stop and subscribe to the podcast to keep up with all the great content that finds its way to Matt's doorstep.