In a previous post I mentioned that my father-in-law had seen fit to give to me the tool chest that had belonged to his great uncle, his father, and himself. In Norway in the 1800's his great uncle Melvin Indahl had been a carpenter. In 1865 he crossed the pond with his brother to find a good life in America. Eventually they settled in South Dakota and went to work farming. Being a carpenter Melvin ofcourse knew that his tools would be some of the most valuable items at his disposal, so he constructed a tool chest, (I could be embellishing a bit, imagine that, the chest could very well have existed before any decisions to strike west happened) The chest dutifully transported his tools across the ocean and across half of the USA before they paused in South Dakota later to backtrack as my wife's grandfather moved the to Western Wisconsin. The tools inside have changed along the way, some have been lost and replaced with others, some tools have been added, and some broken I am sure.

A few years before my father in law gave me a cardboard box that contained some of the previous contents. Several chisels and gouges, a couple of axe heads and a pair of wooden body jack planes. But to see what else this chest contained still leaves me buzzing with energy. Everything needs a clean up to say the least. Some pieces have a thick layer of rust and may not be usable after I get them cleaned up, but we'll see. 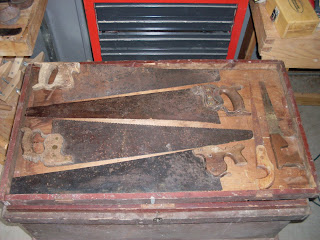 And last, but not least, the saws. These blades are old, I am sure that at least on of them pre-dates the Disston Era, perhaps several. Three full sized are filed crosscut, One filed rip, a keyhole saw with a lot of rust and an odd little saw with a home made handle and maybe a home made blade as well... I'm just calling this a joinery saw for now. One really neat thing about living where I do is it's the same town that Mark Harrell lives in. Is the name familiar, yes he's the owner of Bad Axe Tool Works and the infamous Bad Axe hand saws. Mark does an excellent job of saw restoration and though I have done my own saw restoration in the past, if these saws are as old as I think they are, then I want an experts opinion on what should be done and most likely I think want to have an experts hands "supercharge" these saws for me for another few centuries of performance. I know that he's probably getting busy with Christmas upcoming, I think I'll look him up after the holidays.

Next time...The chest itself.
Cheers