Here There Be Monsters

A long time ago, before GPS on your cell phone, before Google Maps on the internet, before World Atlases in you library, even before the whole of the world was known. A lone cartographer sat at his work, carefully drawing a map of the oceans from which sailors would chart their courses. He loved his work and took great care in painstakingly applying ink to his sheet of vellum. He drew out coastlines, ports of call, places of interest, and always used a wonderfully artistic medallion to point the cardinal directions.

What was this map-maker to do when his knowledge ran out before he reached the curled edge of the calfskin. I can picture him, working at a broad oaken desk by the light of tallow candles. He carefully scribes all he understands with ink and pen. Then, a moment of clarity strikes through the fog of creativity and he realizes he's exhausted all his knowledge and there is still space on the page. Worried, he sits up straighter in his simple chair and gazes off into the far corner of the room. His eyes distant and without focus as he ponders the issue and his options. How can he explain that he has no idea what exists past that certain point of the ocean?

"No one will buy a map with a blank space." He thinks to himself, "It will appear incomplete."

There a muse finds him, stuck in doubt and bending towards the hopeless. The spirit of creativity turns her sweet lips to his old ear and whispers inspiration into his mind. Suddenly he has an answer. He raises a hand to stroke his greying whiskers as he ponders the idea, it's lithe and light in his mind and he works hard to bring it to form and substance. He reaches out to grasp his pen, raising it, freshly dipped from the ink well and moving it towards the vacant space. For a second the tip hovers above the page, then in a flourish of carefully practiced calligraphy he scrawls the words.

"Here There Be Monsters"
I have been practicing my carving skills lately, particularly my 17th Century reproduction carving skills. After being introduced to them via Peter Follansbee's great DVD (you can read my review HERE) I have been working on the techniques in between builds. Some of you may know that I do Viking Age Reenactment in as a hobby, (I guess I consider woodworking to be more than a hobby). I'm part of the group Tribe Woden Thor, we travel to area events, schools, and libraries doing demonstrations on Medieval History and I've spent a while looking for ways to integrate woodworking into my part of the presentation. Once I started working with this style of carving it just seemed natural that I'd finally found a way to accomplish that.

I started at a little show several weekends ago where I carved the front panel of a bible box with a fleur de lis pattern. You can read about that day HERE. A couple weekends ago our group did another small show for a private group and I set up to do carving again. This time I was going to start on the sides of the box.

Now I was headed towards the edge of the map and the place where those monsters lie. Up until this point in my work I had followed patterns directly from Mr. Follansbee. But I didn't want to carry through with the same exact pattern on the shorter sides. Stylistically I wanted more of a contained feature instead of a run on pattern, but I also wanted to carry the fleur de lis and the pattern from the front into the sides. I was stuck, I wasn't sure how to accomplish all those things at once.

I went to the event, set up my break down joinery bench, opened my tool box, and laid out my tools. I positioned one of the red oak sides in the holdfasts and began to stare at it. Just like the old cartographer in the brief fiction above, I pondered my options until I had an idea. Perhaps a muse whispered sweet inspiration into my ear as well because I picked up my dividers and started marking, diving directly into those unmarked waters.

By the end of the day I had finished one side and marked the other in preparation, and after a day of swimming in mysterious waters I think I managed to circumnavigate every monster and come to rest on the shores of a new world. It is one thing to copy directly from another artist's work, It's an important part of learning. When you let those works inspire you to follow your own design instincts and make your own stamp on the style, now you've started stepping to another level. 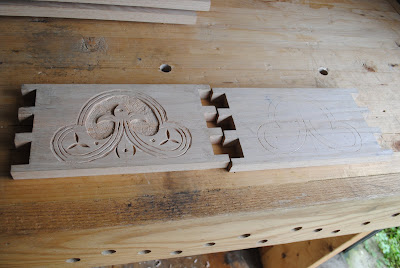 I'm not sure how well my design decisions work in the vernacular of 17th century carving, but the dovetail joinery already shoots the "reproduction" street cred for this piece in the foot, so now I'm really only interested in making a box I like and getting more experience with the carving techniques. Most of the time when I work on a project it already has a home in mind or a buyer who commissioned it. This one I'm building for the experience and the value I get from using it for demonstration at reenactment events, so I don't know where it will end up.

Maybe this will be my first step into an online selling experience like Etsy. Hmmm. . . another uncharted area of the map.

I guess I'll have to tighten the rigging, set the sails, and see where the wind takes me on this one.