I really don't like jumping around too much from one thing to another here, unfortunately it does happen from time to time, I started talking about the Plane Storage Shelf I'm building a little while ago, and while I just began to also write about Dovetail Layouts, I don't want to completely abandon those who were interested and following along with the shelf. 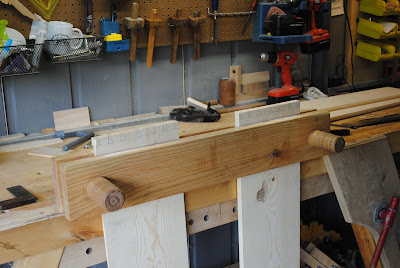 After getting the dados for the the shelves cut in comes the rest of the carcass joinery. Dovetails on the corners were a definite for sure. This shelf would be holding quite a bit of weight when it was all said and done and the dovetail would be the strongest joint I could build that would support that weight. 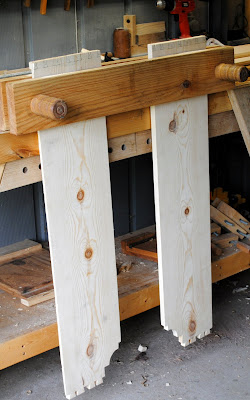 Unfortunately it was at this point I realized I had done something . . . a little stupid. When I was rabbiting the boards for the carcass I was very careful to use stopped rabbets on the sides so they wouldn't show through when I cut the pins for the dovetails. What I failed to piece together at the time was that for the best strength I should be cutting the tails into the sides...that leaves the full rabbet on the top and bottom boards exposed. If I was building this piece for anything other than my shop I would have stopped and redone the top and bottom board with the stopped rabbets, as it stands it was for my shop and so it will hang there as a testament to the mistake, reminding me to think this through better next time. 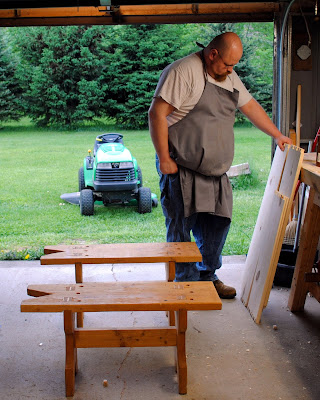 With the dovetail joints cut and tested, I was ready for assembly of the outer carcass of the shelf. Because of the size I set myself up on my saw benches for the task. 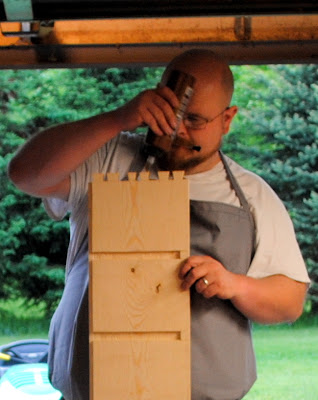 I've been using liquid hide glue almost exclusively for a while now, and while I haven't had a joint go epic fail on me with it I like the fact that it is a reversible glue and that it plays well with the oil based finishes I like to use. It cleans up very easily, easier I think than the standard PVC glues. 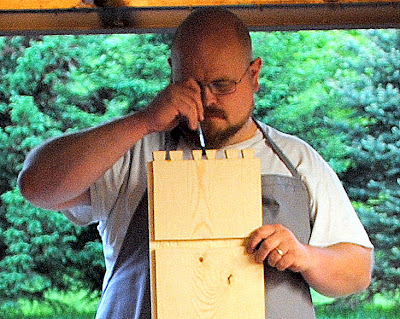 Especially with dovetail joints it's very important to get the glue on all the mating purposes, an acid brush is a great help in achieving this. 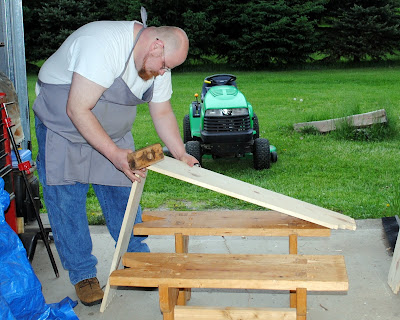 Now for the first assembly, the best way to deal with longer stock like this is sometimes to get it started on an angle. The shelf is made of pine and therefore has a little compression wiggle room in the joints as they come together anyway. I eyeball it to line up and as close to a right angle as possible and after a few test taps I hammer it home. 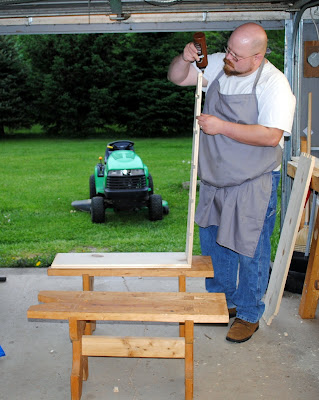 Now you move along to applying the glue to the next joint. 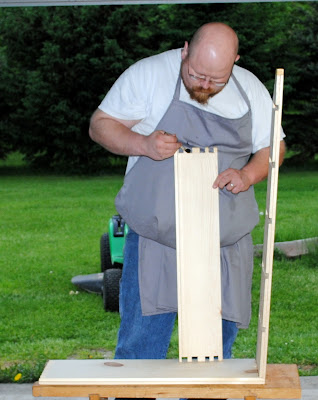 It's a little easier to work once one section is basically supporting itself upright. You'll notice the symmetrical pins on the board I'm gluing. I think symmetrical spacing of different size pins and tails adds some interest and can help make a piece pop. 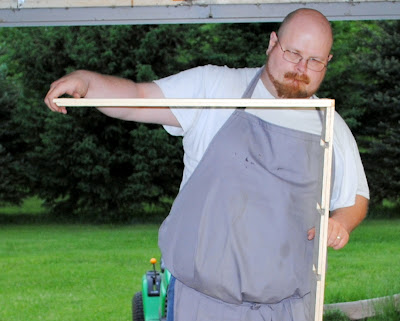 Now its a matter of lining this side up. . . 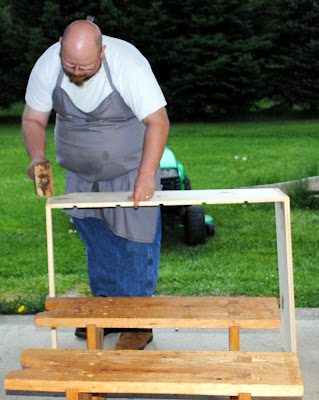 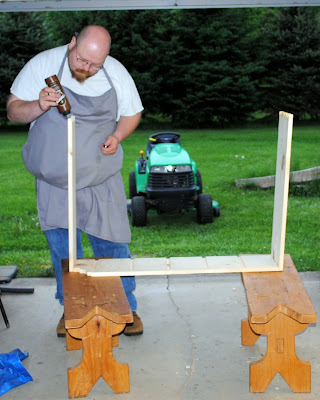 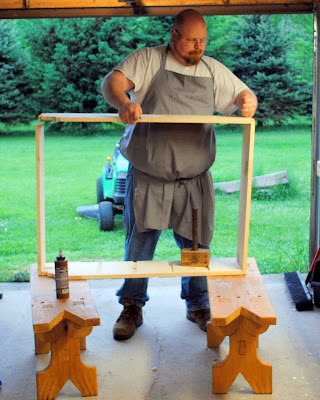 Getting it started by dropping The Big Fist! Watch out! 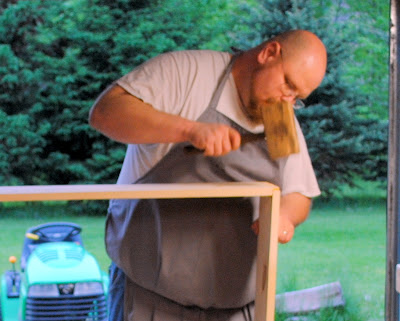 Hmmmm... must have worn the fist out by now and switched to the Hammer. 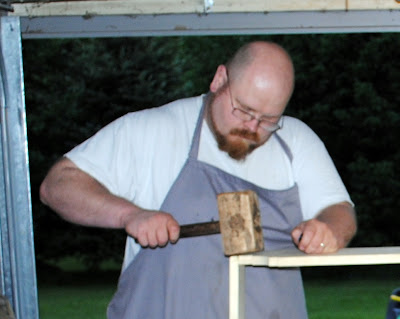 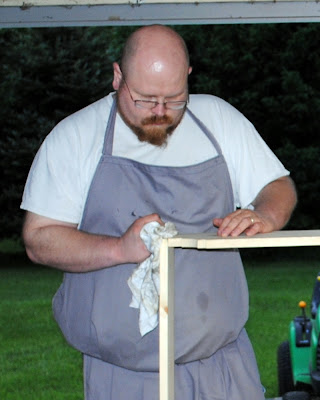 A little work with a rag to remove some of the excess glue squeezed out. With PCV glues I sometimes use a damp rag or sponge. I'm not sure but I have it in my head that this will weaken the hide glue so I just use a dry rag. The dried excess cleans up so much easier anyway. 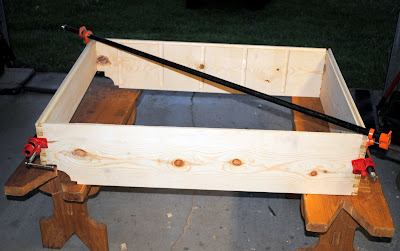 Some light clamping to hold it in place and one running corner to corner to help set the box square. As I look at the picture tonight I have to say that often I use more clamps than just three on something like this, I'm not sure why I stopped here but what I had going felt like it was effective enough so I didn't return to the clamp rack for more. Hmmm. 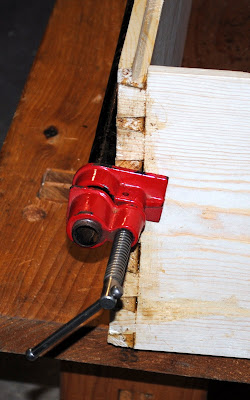 Here in this pic you can see the uglyness I created by screwing up my planning when it came to my dovetail joints. I know better and I should have planned better but sometimes you are just rocking forward in the shop and you get those little breaks. Like I said, it this wasn't just a shelf for the shop, I would have redone the work to get it right. As it is, keeping it will bug me just enough to be a constant reminder in the future.

Besides we can't be perfect all the time, or we'll end up looking like this guy who set the timer on the camera and started it realizing he had nothing set up top do. Makes me think of a PSA add for woodworking (Kids...this is your brain on sawdust, just say YES!!) 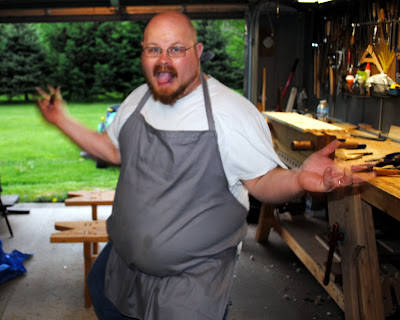