I have always had a deep relationship with books, I can understand e-readers like Kindle or Ipad, but I just can't see ever giving up real books. I read a lot beyond what I keep up with online. I drive my wife nuts because I read between two and six books at a time, and she is a strictly one book at time person. the other issue is inevitably my books end up piled high on my side of the bed, and occasionally under her feet when she makes a midnight trek to the master bath.

Marital issues aside, I am very fortunate to live just a few blocks from La Crosse's public library and it has a great selection of  woodworking titles to help feed my habit. Once a month at least a couple of them follow me home. Some I read in depth, others I skim through for ideas. A few weeks ago I checked out Thos Moser's "How to Build Shaker Furniture."

There was a passage in an early section of the book that caught me by off guard, so much so that I put down the book to collect my thoughts about what I 'd just read. I even had to get my wife to unplug from her Ipod so I could read the passage to her, (another of her favorite things, I'm so lucky she puts up with me).

The passage reads as follows:

"With experience one learns to anticipate what to look for in ancient cabinetry, since the methods of joining are relatively few and, in time, become predictable. Unlike today's craftsman, the old-timers didn't have a convenient glue and therefore used it sparingly. It is for this reason that our task of disassembly and repairing is made so much easier. I often think the eighteenth-century joiner knew that someday his work would be so exposed. Why else would he have been so precise in stamping roman numerals on the pieces of a joint inside the joint itself? Or why would he take the time to gently chamfer all the edges of a concealed tenon? When inspired, I will often write a message inside a joint or under a support or hinge in hopes that someday, years hence, somebody will read my message about Watergate or the temperament of my oldest son, Matthew." 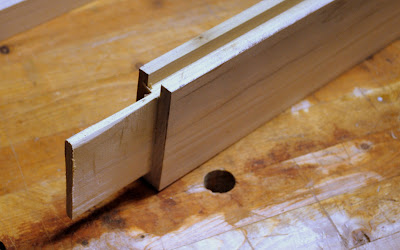 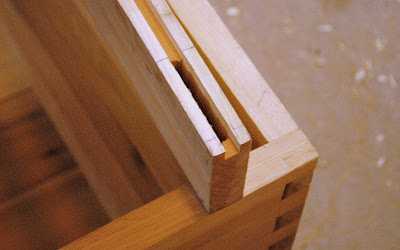 At first when I read this I was taken back. Several years ago we owned our own version of "This Old House," The basement plumbing that had been retrofit had the date of 1903 stamped into it, so we knew the house was pretty darn old. We also knew it had gone through an extensive remodel in the past, we guessed around the 50's based on the kitchen cabinets design and other clues. The carpenter who did the remodel was like an artist, he had signed everything. Every baseboard I removed, almost every piece of trim had the cursive signature of "G. H. Baltz" and the date 1947. I haven't thought about it in forever and I didn't really understand it at the time, but I think I may get it now.

What Mr. Baltz was doing was making a connection with what he was building. He was adding a component of himself to his work that stretched beyond his labor.

Labor by itself can be an impersonal thing. I can build furniture piece after piece and as it leaves my hands it has the potential to become something valued by the new owner, or it can become just another object to fill their lives. I often wonder where the furniture we build fits into the scheme of things created. Where does it reside on the bell curve between factory made, press board bookshelves, and recognized works of high art like the Mona Lisa, or the ceiling of the Sistine Chapel.

When does the magic happen that transforms the chair holding your butt up off the floor, into something worthy of a place in a museum. Surely age, design, and craftsmanship all pay their roles in this but there is something else that resonates. Something else that connects with an audience and makes that chair more than a chair, more than the sum of it's wooden parts, more than the hours of labor and effort put into it's creation, even more than the skill of the hands that worried it into existence.

High art carries the same sensibilities as well made piece of furniture: technical skill, craftsmanship, proper design and proportions, and a presence that people notice. But art carries with it something that can be difficult to invest in a piece of furniture. Great art, the kind that people connect with, the kind that people remember, has a bit of the artist themselves invested into it. The work is personal, often times intimate, even when it's not immediately evident, trust me, it's there.

For years Leonardo Da Vinci's, the Mona Lisa has been heralded as one of the greatest masterpieces of all time. Everyone knows the work, everyone has seen the painting on display, in prints, in photos, in advertisements, and in satire, since forever. One of the mysteries is "Who was the girl?" Then several years ago a team decided to run the image through facial recognition software and amazingly it hit on Da Vinci himself. The Mona Lisa, may very well be a self portrait. All other theories aside, how much more personal and intimate can you get?


What stopped my reading of How to Build Shaker Furniture cold in its tracks was Thos's mention of writing something hidden in the joinery about the temperament of his son. At first I thought "Why would you do that?" Maybe if you were building something for yourself, but at the time he was writing the book, Thos Moser was building Shaker reproductions out of his shop for sale to many people. I got completely hung up on the thought that you would be scrawling something so intimate, making that personal connection with the piece, and then see it leave in the hands of strangers. It doesn't get more intimate than a message about your feelings about your child.

It felt akin to sharing your deepest, darkest secrets with a perfect stranger you'd just met on the street, but somehow they would have no idea you're sharing with them.

What do you gain from enclosing these small messages, these bits of hidden magic into the secret places of your work?


Adding these tucked away messages is kind of like sending a letter to the future, it's a hidden magic carrying a bit of yourself, your personality, you experiences, your influences, your wishes, and your dreams into the future. It's a hidden magic that connects you with that furniture forever, and through that furniture, can connect you to the rest of the world.  Because in the best of all worlds real art is about making those connections.

And I have to believe in that distinction. I have to believe that the work I put into a piece gives it greater value than anything that can be turned out by a factory, and I have to believe that what sets it apart is not just that it's better built using superior materials. those tangible, physical things can be replicated if those factories have a mind to do so. So I have to believe it's the intangibles that really count in setting my work, and the work of others serious woodworkers, apart. And taking a lesson from the art world and inserting a piece of intimacy into everything built is a start along that path.

Once you make the decision to invest a part of yourself into a project, you start to look at that project a little differently. And maybe that little change in perspective is enough to show through in your work, and thereby change someone else's perspective about shop built furniture altogether.

This is a practice I plan to continue on every piece that passes through my hands, and I encourage you to try it as well. I know it sounds strange, but it helped me come to terms with this tool chest build. I dislike playing follow the leader on anything, I rarely use plans. As I started this project there was a voice in the back of my head that was giving me a hard time for following Chris Schwarz again. Even though I had wanted to build a chest for a long time, and even though a chest is the right solution for me now. I felt like the popularity of the book coupled with the fact that I've built a couple of his other projects made it feel like I was just buying in and selling out. Allowing someone else to substitute my judgement with their own.

Along the way I've had the feeling like I've been building Chris's Chest, even though I know that's bullshit, the critics in the back of my skull would herald and scream it at the top of their abilities. Sneaking in some hidden magic writing has somehow helped me reclaim this chest as my own. Yes I'm using Chris's ideas and plans for the most part, but I cannot argue with the logic of almost any of his choices. This is the strongest, most stable way I can think of to build a lid, and I don't want my desires of nonconformity to compromise my results.

I want the chest to both be mine, and I want it to be the smartest construction possible. I'm asking it to follow the divergent logic of the phrase "Disobey Me" and Thos Moser helped me to find that path. I'm not building Chris's Anarchist Tool Chest, I'm building an Oldwolf Workshop version of a traditional tool chest following the good advice of someone I've been reading for so long I consider his words like an old friend's. 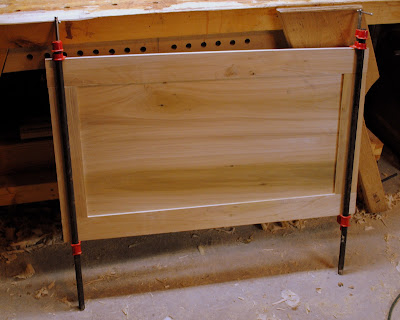 As an interesting coincidence, as I've been struggling to find my right words on this difficult to write post, I saw that there has been a release of a new, revised and updated version of "How to Build Shaker Furniture" It's availible through Popular Woodworking's books store here:

I'm going to pick up my own copy so the library can have theirs back. I humbly suggest you pick up a copy as well. 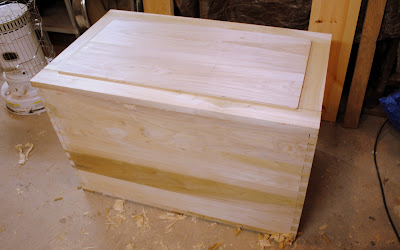