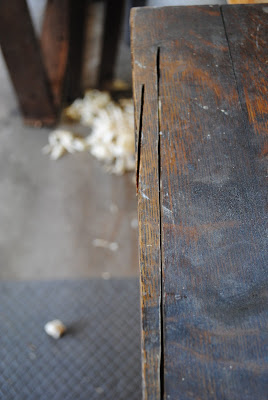 I've recently restored a craftsman style desk (c. 1950's) for my 14 year old. Restoring and repairing furniture is very different from building it from scratch. There are different problem solving muscles you have to flex to cross the finish line. The biggest challenge on this piece was figuring out what to do with the front left hand corner of the desk and the twin saw kerfs that had taken up residence there.

Splits can be glued back together. Holes can be filled or covered with a dutchman. Diagonal saw kerfs cutting in from the front edge, that took some thinking about. First I considered just sawing the front square and removing the cuts, but that would have left the front to close to the casework and drawer beneath.

Then I considered edge gluing on a new board, either oak and try to match it or a contrasting board and own the repair rather than try to hide it. I might have gone this way, but I figured as long as I might have to cut it off anyway I might as well try one more idea. 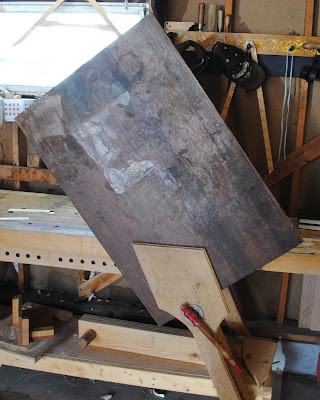 I hoisted the tabletop into the leg vise, dug out my finer toothed rip saw, . . . 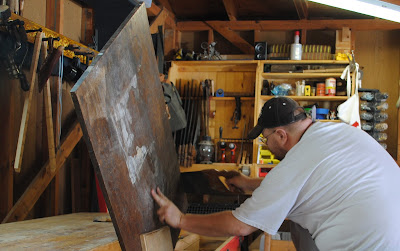 . . . and promptly finished up those saw kerfs. 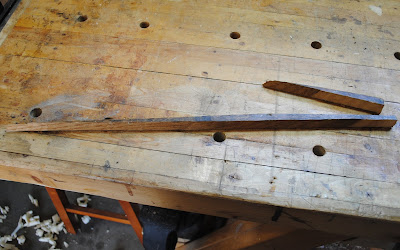 Removing the wedges from the table edge. Then I spent a little while cleaning up the cuts with a block plane so the wedges edge joined back to the table top as seamlessly as possible, while trying to retain as much material as possible. 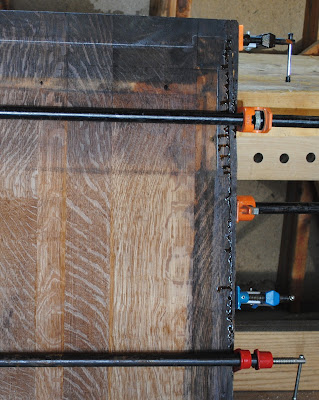 And I edge glued the wedges back into place. With this I lost the square of the corner and I considered removing the same from the other front corner, giving the front edge of the desk a gently radiused curve. In the end the curve didn't seem like the right feel for the desk. 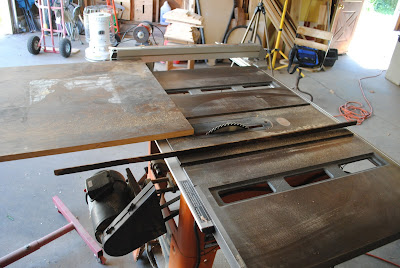 I like my hand tools a lot, but for a long accurate cut like this I decided the tablesaw would be the best choice. In the end I shaved about a half inch back from the original width. Not a bad sacrifice for a matching repair. 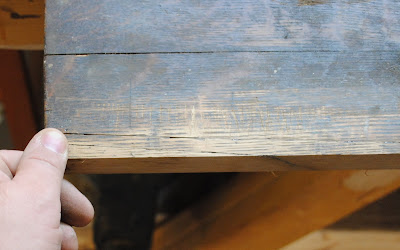 Some planing, sanding, and finishing and I can barely tell where it is on the table now, but you'll have to wait a while more to see the finish pictures.