There once was a very beaten up and abused desk that spent many years tucked away in a garage. One day a new king took over the lands and one of his princesses spied the lonesome little desk cowering in the shadows.

"Father," She said with a voice as sweet as a bird's song, "Could we take in this poor, beaten soul and bring him back to his former days of glory. I already have the perfect new home for him in the corner of my room."

The father, who relished a challenge like this, agreed and set to work. 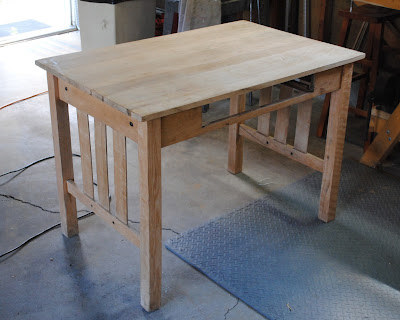 Other than the pieces of the drawer I had finished repairing and cleaning up all the pieces I had. I could see there used to be a stretcher between the leg sections. To get the right idea I paged my way through Bob Lang's "The Great Book Of Shop Drawings For Craftsman Furniture"  and decided a wide, flat, thicker board would be the right move.

I had a wide, 5/4 white oak board to use. The problem with it was it have several through knot holes in it. Well I didn't see that as a real problem, I saw a chance to add a little personality to what was a pretty sterile and generic craftsman style desk design. I called the "princess" out to the shop and she liked the idea too. 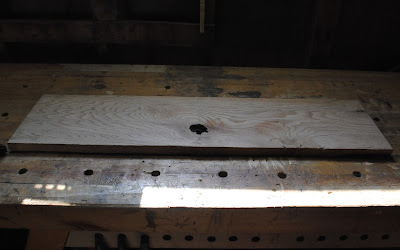 I sized and planed the board to fit. The original was held in place with a pair of thick dowels from either leg section. I'm positive that weak joinery was part of the reason this piece failed. Someone stood on, sat on, or laid on the stretcher and blew this piece up. I wanted to strengthen what was there without performing radical makeover surgery. 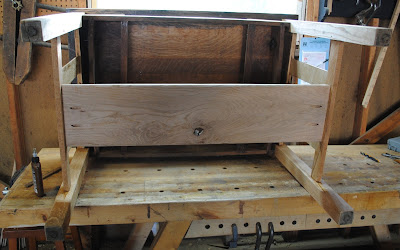 In the end I elected to reinforce the dowels with some pocket screws on the underside. 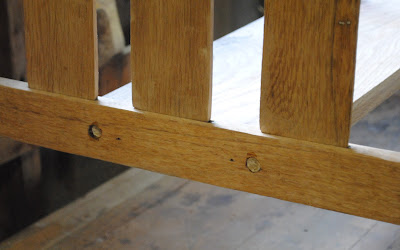 And re-insert new dowels through the side. I removed the tacked on faux through tenon ends to drill and drive the new glued dowels from the outside. 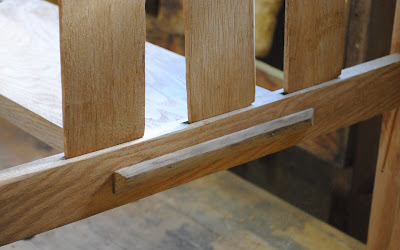 Then I glued and re-tacked the faux ends and the new stretcher was done. I centered the knot hole in the space and situated it towards the back of the desk to help it add a little personality without being an initial distraction to the look. 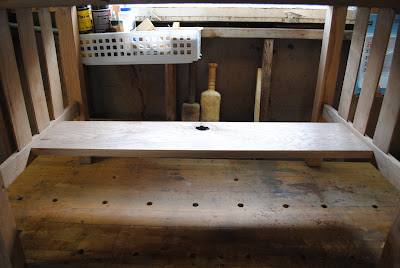 Then it was time to fight with the drawer. There had been several challenges along the way with this project, but the drawer was tough and in the end I had to make some compromises I'm not entirely happy with. The drawer front was dovetailed to the sides with half blind dovetails that had been created with a router. The original drawer sides were dogmeat and the best thing to do was make new sides from scratch.

That turned the routered dovetail slots into a problem. I don't have a set up to rout my dovetails. I cut all of my with a backsaw. I put the drawer face in a vise and tried to work out converting the curved contours into the straight lines I needed to cut the mating board. I just wasn't happy with where it was headed. 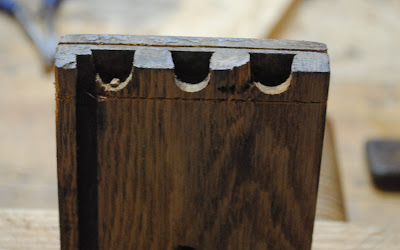 I decided to bag the dovetails and make a rabbet joint reinforced with screws. A cop out. . . maybe. But sometimes bringing a piece like this back to life often means some compromises have to be made. To me compromise means that nobody is completely happy with the end result, but the result works. 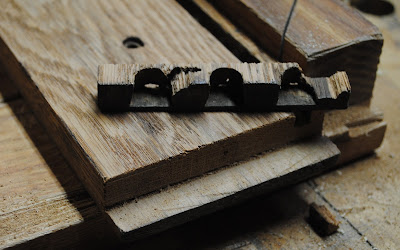 Instead of freshening the dovetail angled with the backsaw, I cut a rabbet instead. 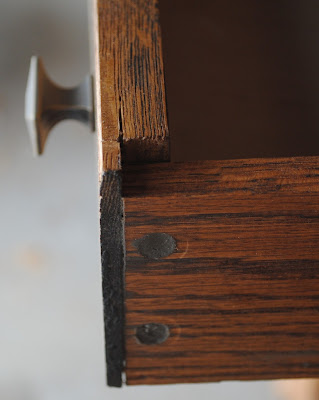 And connected the new sides with glue and countersunk screws, which were later filled with wood filling putty. 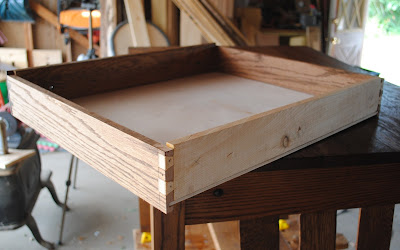 To get some strength I dovetailed the pine back to the sides with strong, beefy through dovetails and I replaced the solid wood drawer bottom with some quality plywood to minimise wood movement and stress on the rabbet joints.

I had all the pieces back together. Humpty Dumpty resurrected. The most important part was yet to come. In my estimation all the work would be for nought if I bombed the finish.