Woodworking is an exercise in problem solving. There are two kinds of problems, the ones that life pushes on you, and the ones that you create for yourself. The later is usually the more difficult to deal with.

I started to plan and build a wall cabinet inspired by James Krenov's work, a little outside the sphere of work that people have come to expect from me. Taking a shot at it is one part prove to myself I can, one part prove to the world I can, and one part "because I just want to, that's why." The inspiration was a pair of pine boards I found in a pile at the home store and immediately visualized as doors for this kind of cabinet. 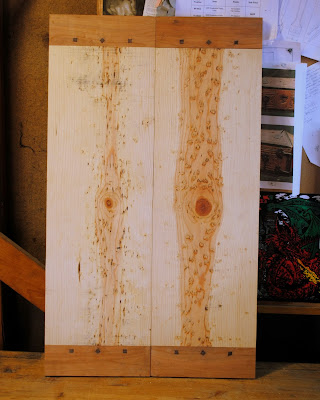 In my own way, I decided to build the doors first. You can read about them HERE. Standard logic says you should build the carcass first and fit the doors to it. As I've said before, here at the Oldwolf Workshop we follow the standard substandard logic. Now my logic had forced me to reverse engineer the carcass. 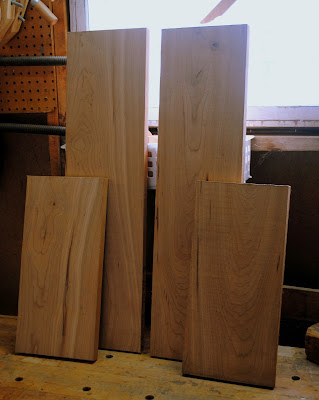 I had a nice 5/4 cherry board with some great grain, a little interesting but not in a crazy way, and I thought it would make a nice compliment to the wildness of the pine doors. At a little over eight foot of board I had just enough to squeeze the four sides out of the one board. 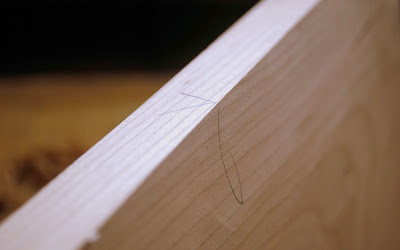 I planed and worked the boards flat and square on all surfaces. Not killing for a universal thickness. hand work allows you some freedom in millimeters of variation one board to another, just working for surfaces as true and square as possible. 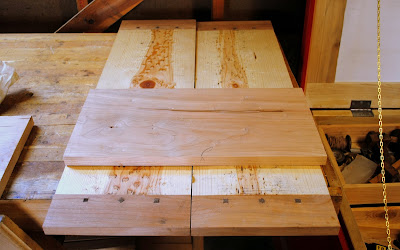 One of my personal challenges for this build is to work without taking measurements. That is to say, I'm not interested in using numbers to size things. I'm trying to work more by eye and with a sense of proportion rather than follow out a plan of known measurements from a scaled drawing. I've been reaching for story sticks, sectors and dividers instead of my folding rule and tape measure.

The cabinet is to be as wide as the doors with through dovetail joints in the corners. I laid out the doors with a couple coins in between to help set the gap, and laid the roughly sized carcass end on top. I squared one end and used a pencil to scribe the width of the doors onto the blank. Scribing with a sharp pencil can come close but will still leave a couple thousandths of an inch wide. This was OK with me and I knew there would be sanding and more surface removal to do on the carcass after it was assembled so it's a planned overshoot.

If the end result of the carcass is more narrow than the doors, I will plane the doors down a little more to get the fit and look I'm after.

I re-marked the pencil line square with a tri-square. (It wasn't really off much more than a wiggle of the wrist) and sawed down, splitting the pencil line. Then I took the other carcass end and sized one to the other until they matched. 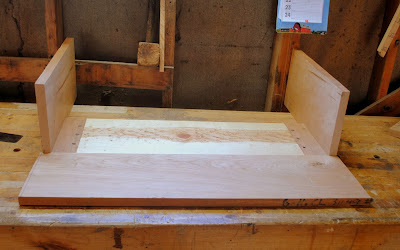 With the ends done I began on the sides. I laid out a door and the carcass ends and butted the side to them. The ends are included because in the final idea the top and bottom of the carcass have a curved profile that moves out proud of the doors and the carcass sides will snuggle behind them.

I marked this set up on the side, squared the line, cut down the side and sized the other carcass side to the first.

The most difficult part of all. Having to wait until I completed all the joinery (dovetails, rebates, and dados) before I could find out if I had done things well.