Some people think I'm crazy, but I like the idea of tests. Even when I was back in school I would rather take a test than any other schoolwork. Tests are logical and measurable and good tests challenge you and tell you what you know and a little bit of who you are.

I wish there were tests, real tests, for woodworking. Not the kind of ridiculous woodworking tests Bill Schenher over at Billy's Little Bench Blog has been taking. Instead I think there are a handful of Must Build lifetime projects that you should accomplish to consider yourself a well rounded woodworker.

Before the poo starts flinging, I don't pretend to have that list, infact that list may be different for me than it is for you. For me it includes some items like a Windsor Chair and a Pembroke table. Those tests are a little away from me yet, but it was time for me to knock something off my list.

I admire the hell out of James Krenov's cabinets. The plays on proportion and wood grain make them masterworks before you begin to look at the close details that prove they're masterworks. Though I admire them, the more modernist style seems outside my normal playground, and it is, and for a long time I considered building one beyond me.

Back in April of 2011 I was buying a selection of pine boards for a project. Amongst the pile was one starnge looking board, pockmarked across the grain.

"Well that looks weird." I thought. 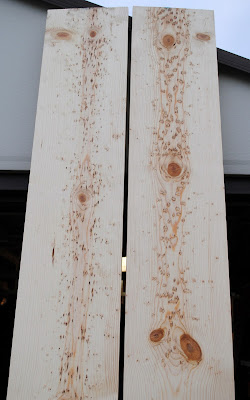 Then after a bit I found another similar one. I set them down to one side as I picked the other boards I needed. As I started returning reject boards to the pile I saved these two for last. Though I didn't really have the money budgeted for them, I brought them back to the shop. I wrote a post about them you can read HERE. They were meant to be for my take on a Krenov style cabinet.

Over time I have sheltered these board. I kept them nestled, protected in the rafters of my old shop instead of piled out, semi protected under a lean-to like most of my other stock. There has been several times where I could take the next step in a project today "if I only had one pine board," to use for drawer sides, or a chest's skirt, or something else. I would stare at the pair for a few minutes, pondering their fate, then go get in my car to go buy a new board instead.

The three of us have developed a relationship, and eventually sawing into them was one of the more nerve racking moments I've ever had in the shop. For one, because once I've cut them, there's no going back. It's cabinet or firepit. And two is the result of a personal decision to build this cabinet without a lot of planned out drawings and measurements, without referring to my "golden ratio calculator" iPhone app, without a whole lot of numerical measuring at all.

I have a picture in my mind, a feeling I'm trying to capture, and until I reach the end I won't know if I've accomplished it or not. I sometimes pride myself on my speed of production, but I'm taking slow and steady steps with this one, like walking a tightrope.

Take a step, check my decision, reassess my plan, take a step . . . you get the idea.

I don't want to miss a detail because I've decided to move too fast. I've done that before. I hate myself when I do that. This cabinet is me, testing myself to the highest quality work I can do.

That only ensures that in a decade I'll look back at the piece and laugh at my idealistic naivete.