I'm usually pretty loud and obnoxious about my distaste for jigs. Building something just so I can build something else seems like wiping before you poop. They are a necessary evil in power tool woodworking and I get that, but I hate the concept. Especially when they are one time use jigs. The false economy of jigs is one of the reasons I strayed from a New Yankee lifestyle and fell in love with hand tools.

I have the different feeling when it comes to a variety of jig I've come to call "bench appliances" I'm still not a fan of making them, I'm not a huge fan of making my own tools (though often I do). I really want to make furniture. But bench appliances help, less like jigs and more like tools, and making my own is more fiscally prudent than buying one. Plus once they're made to my liking, I can use it over and over until it wears out.

That is worthwhile economy. . . so I added another one to the shelf below the workbench last night. 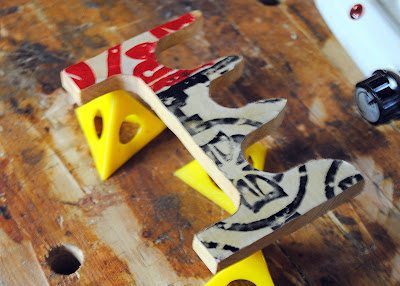 I had some fancy cutouts to do on a piece. The current project I'm finishing is a box to display and protect a client's collection of reproduction medieval daggers. Imagine a saw till inside a tool chest, only fitted for daggers.

After fitting and roughing the shapes for the dagger hilts and blades I strengthened the thin pine by sandwiching it between two veneers of printed canvas paper. Then I wanted to make some cuts into the top reminiscent of gothic arches and relieve a space underneath for more goodies. The coping saw seemed like the best tool for the decorative cut outs but I didn't want to stress the piece by clamping it in a vise and sawing on the unsupported fingers.

I pondered making the standard Birdsmouth board. a simple board with a "V" notch cut into it, but I wanted it better, lifted off the bench so I could stand and saw without hunching over.

I remembered something. A few minutes of looking and I found it. Don Williams calls it a Tilting Fretsaw Fixture, and I swiped the idea from his blog. 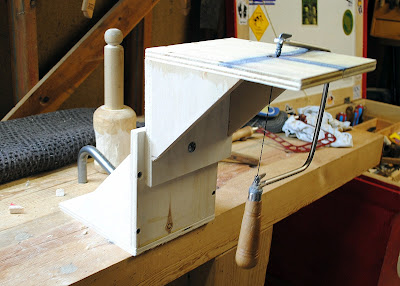 It's simple plywood construction from a few scraps I had laying about.The two parts are held together by a single carriage bolt and wingnut so the table can tilt side to side to make cutting double bevel marquetry by hand simpler. (You can see I was less than careful and drilled the bolt hole off center so when the pieces are flipped into working position they are off center by maybe 3/4" . . . oops. A quick expletive and I decided I could live with it.)

Some 1/2" quality plywood, some glue, and some countersunk drywall screws. Everyone should build one. 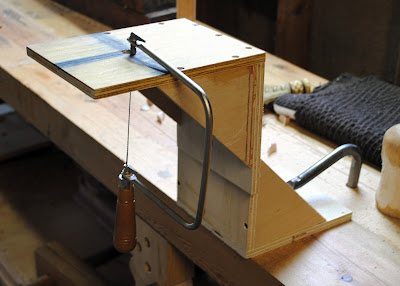 There is a 1/2" hole drilled through the sawing platform and a saw kerf from the front edge to the hole. I quickly discovered I had trouble trying to keep the saw within the bounds of the hole while I worked. My solution was to blacken in a couple bands of visual cue to help me behave. Thus the black "T" on the platform.

Not wanting the ink to easily wear onto a piece I applied two coats of shellac to make an easily repairable seal. I suppose any film finish would have worked but the shellac was there and freshly mixed. So you know. . .

I let it dry overnight and fired it up this morning. It works perfectly fine and even gives me an excuse to try some double bevel marquetry of my own one of these days. Watch out Jameel :)