Nearly All The Bells And Whistles. 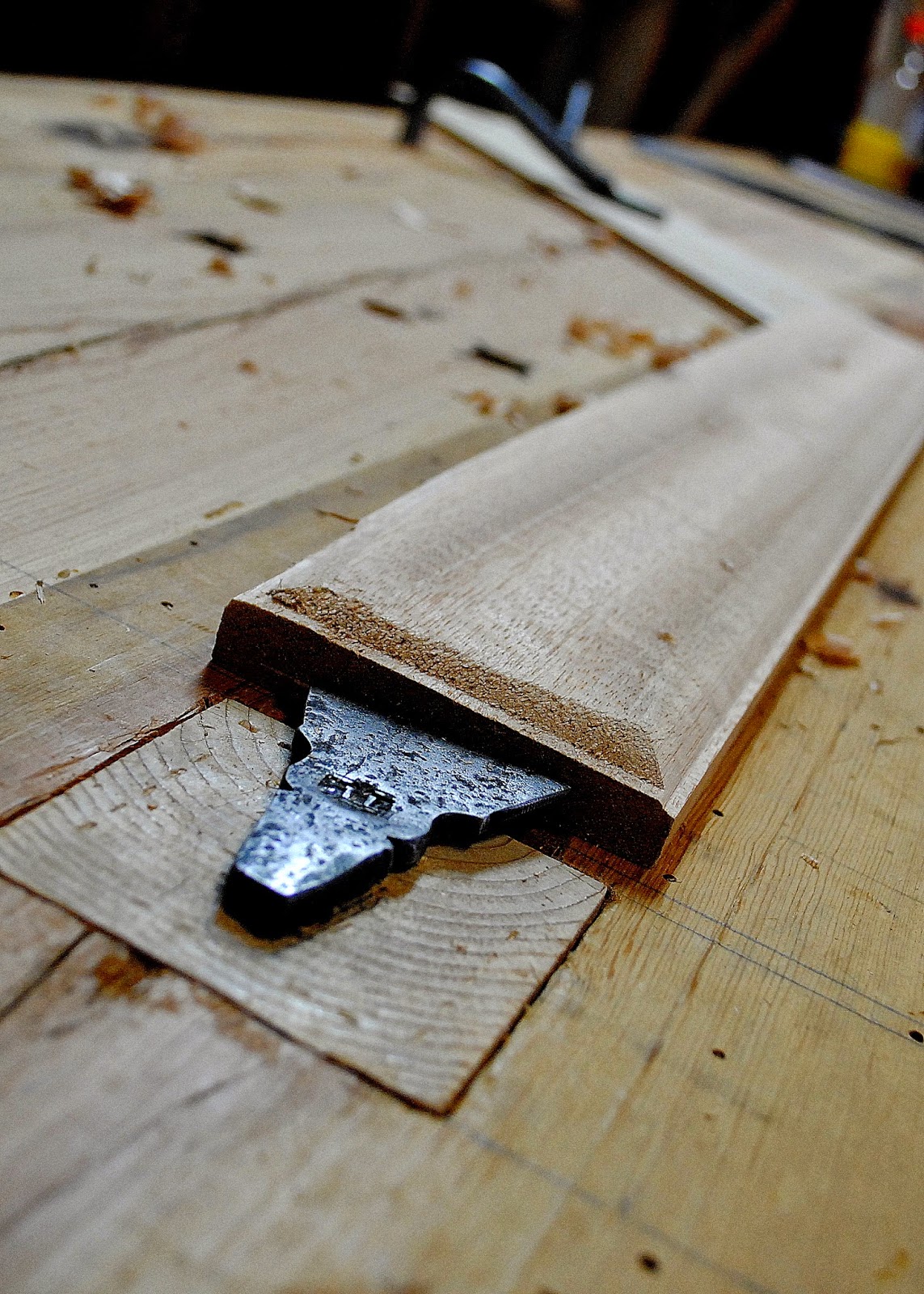 The new workbench I bodged into place last fall needed some of the bells and whistles attached if I was going to make serious use of it this year. After all a bench isn't a bench without the handful of workholding devices that make life easier.

In my book a bench needs three things

2. A Leg Vise. This is going to be yet forthcoming. I can't make up my mind on which hardware to buy (or how to earn the extra scratch needed)

3. A Plane Stop. As some of you remember I received this Perfect Workbench Punctuation last fall from Tom Latane.

A little while ago I managed to drill my initial holdfast hole locations and set about installing the plane stop. 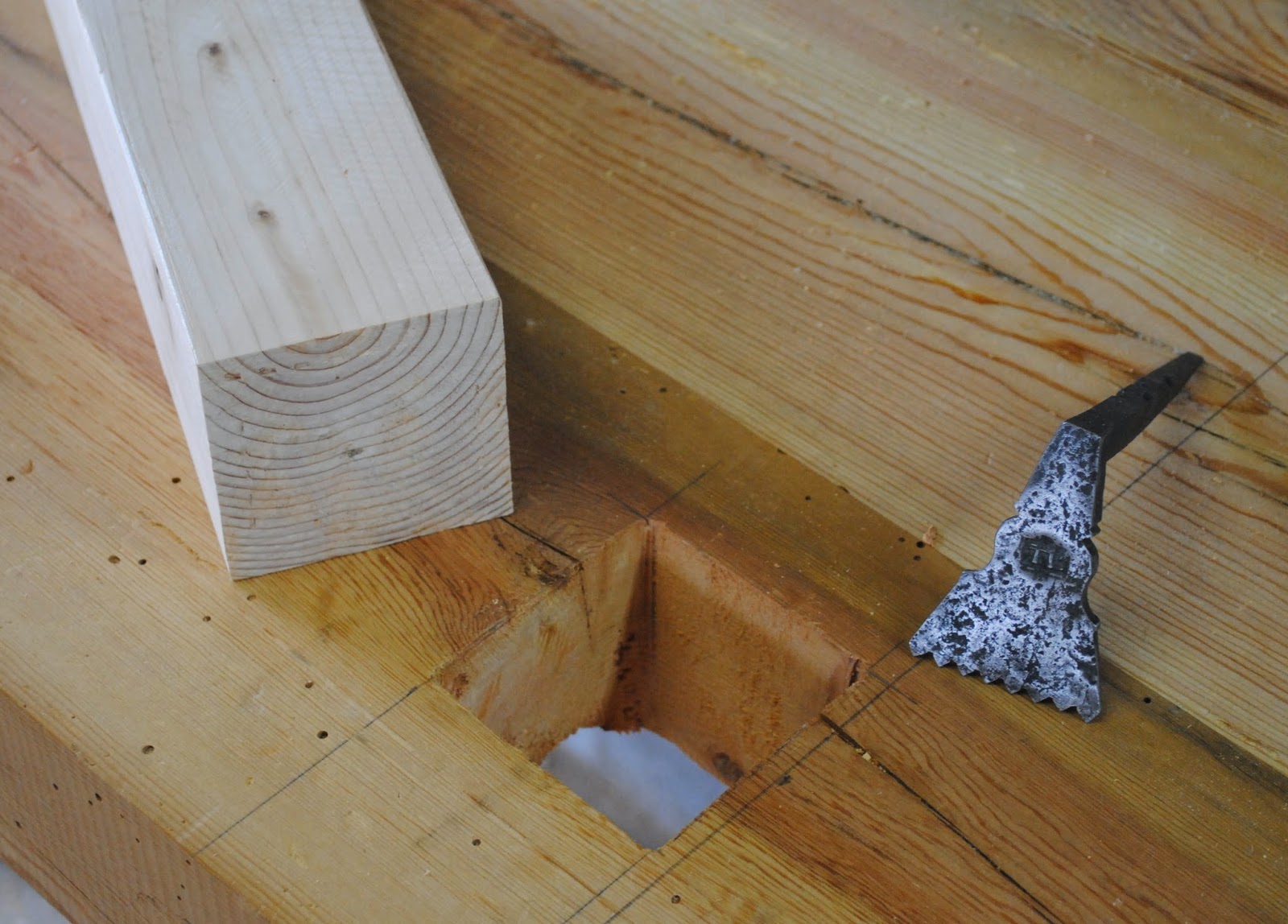 I started by making a 3"x 3" Square hole in the bench top and milling down a blank of clear white pine to fit snugly. I know what you're thinking, isn't that supposed to be made from hardwood? I guess the answer is yes but there are a lot of "suppose to do" things I just ignore. I think it relates to issues with authority in general. 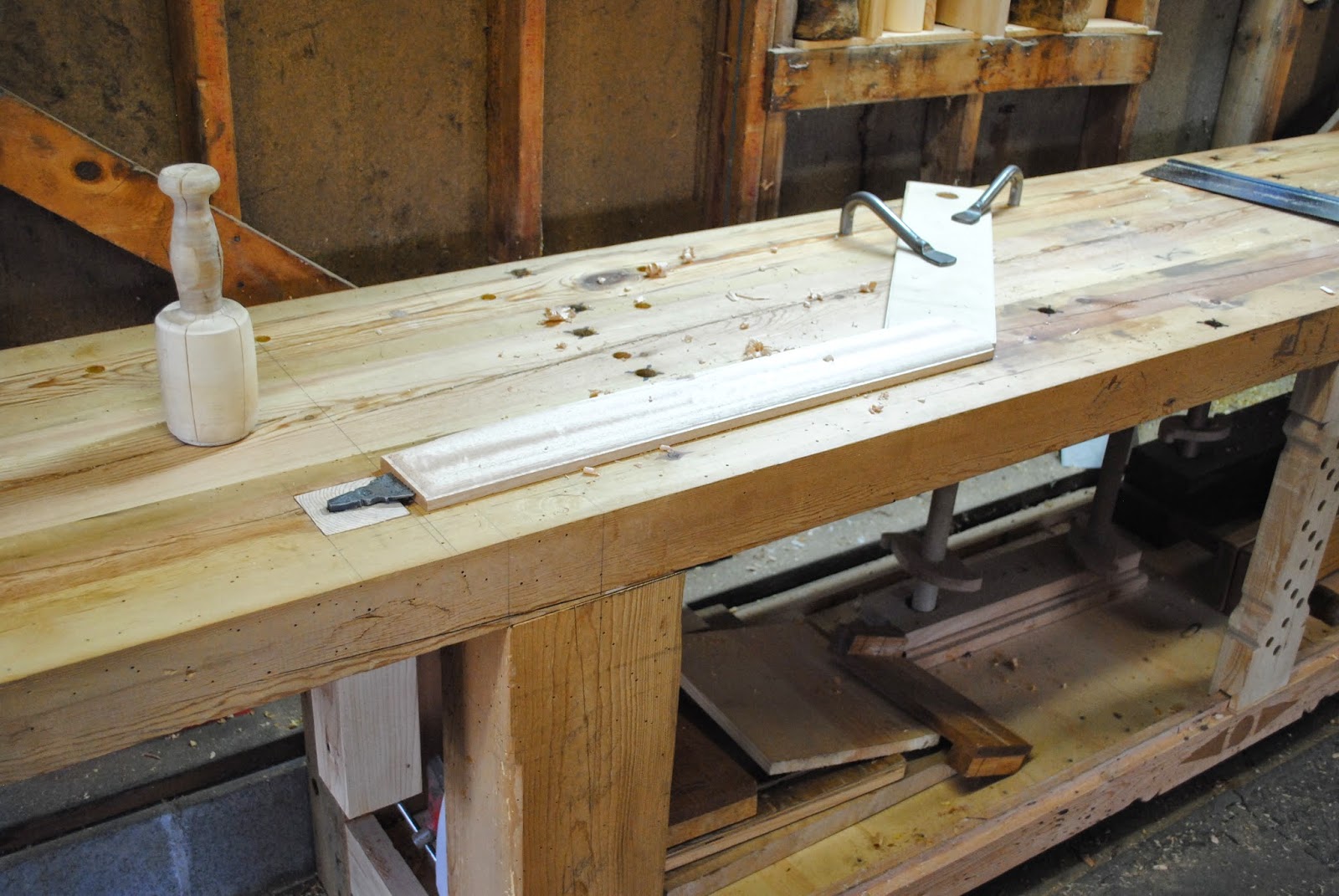 To go along with the new plane stop I made a few new notched battens or "doe's feet" from some 1/2" plywood scrap. Since these photos I've also glued a third sheet of 150 grit sandpaper to the underside to increase the grippitude. 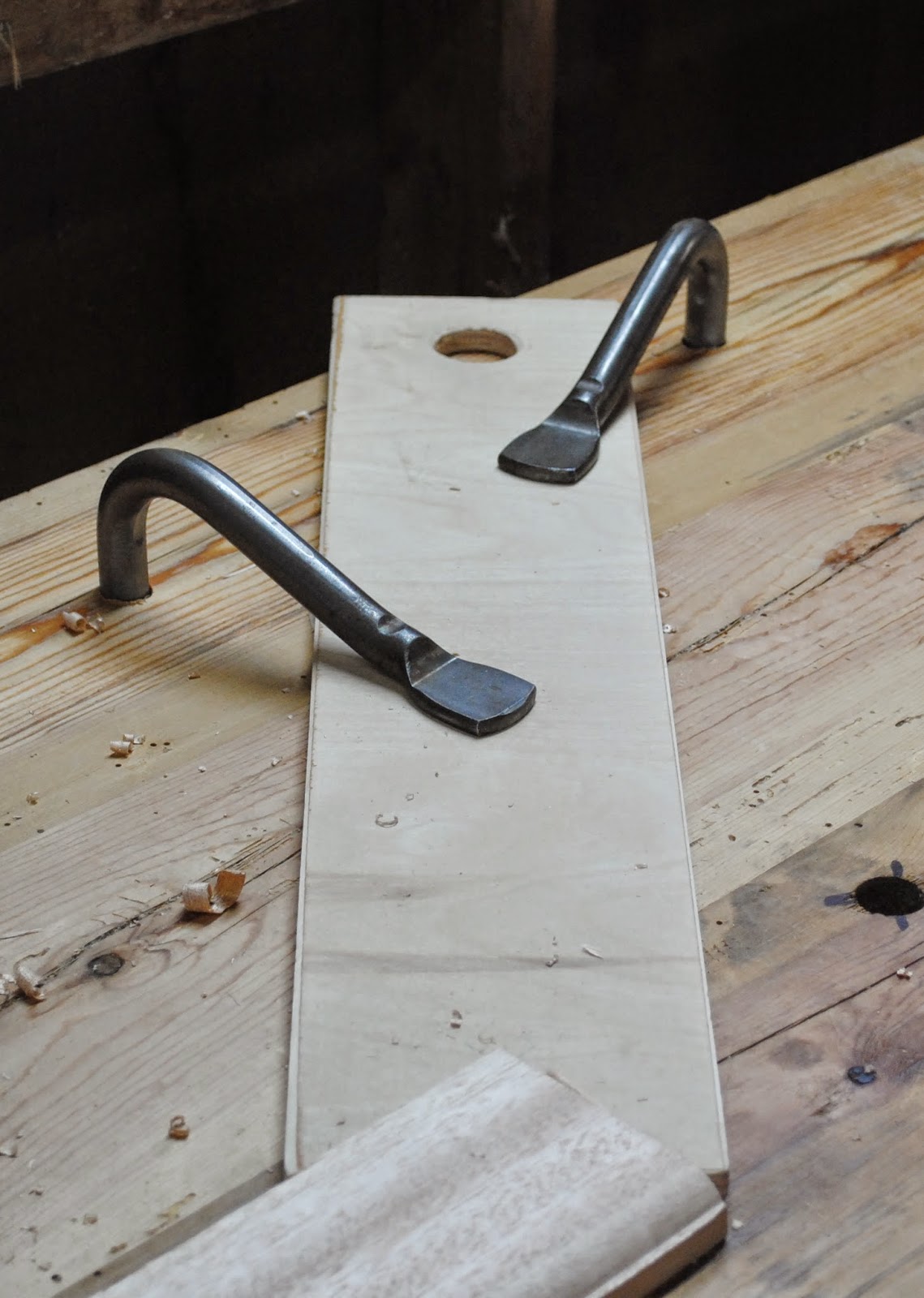 Yes it will scratch the workbench top but no worse than errant saw and chisel marks. This is a workbench not a sacred altar to thumb twiddling. The sandpaper improves and already great tool. It's not like I've gone to the blasphemy of hitting the whole top with a toothing plane. (Oh wait, I just ordered a toothing plane from Hyperkitten) 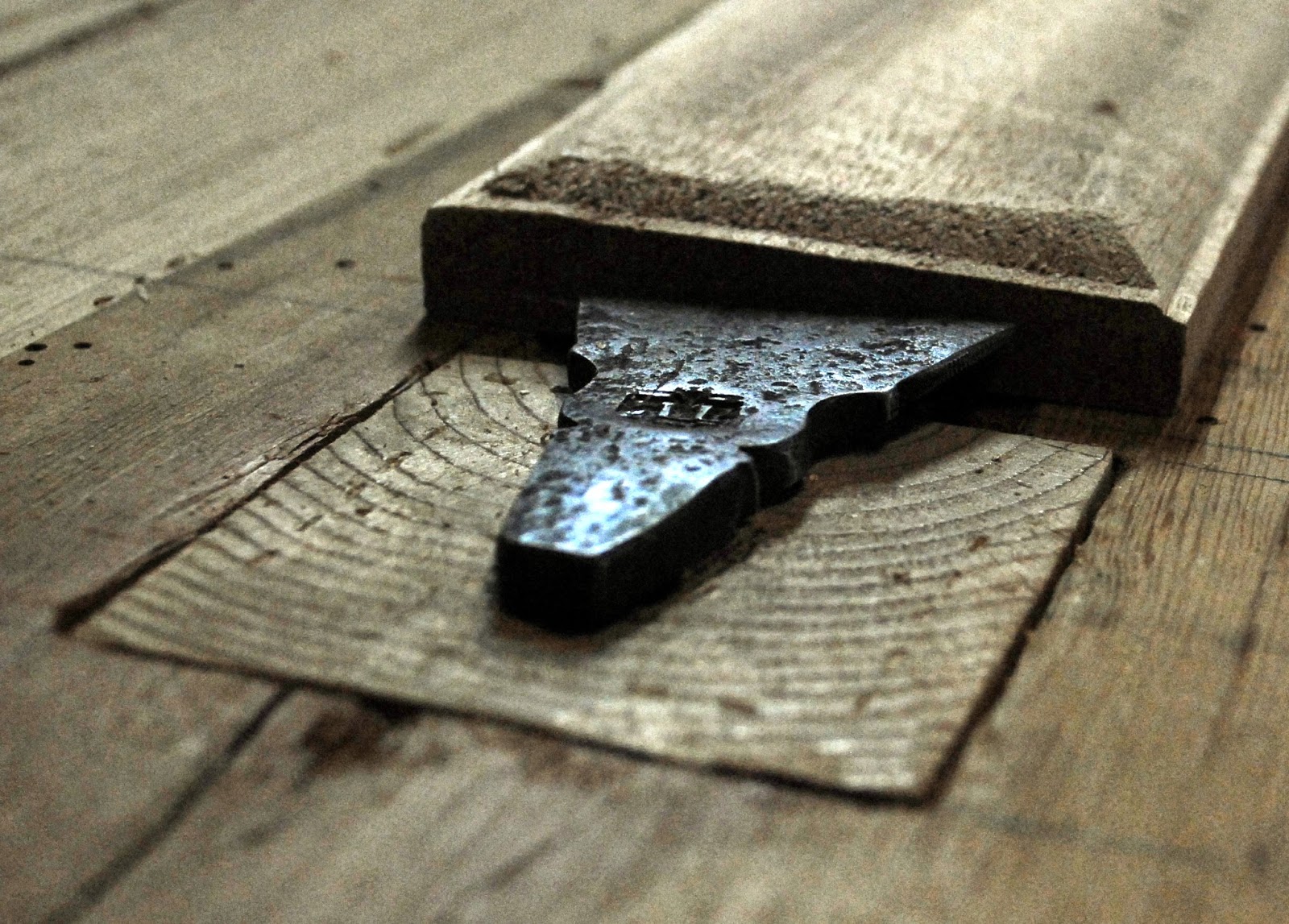 In the meantime, still pre-leg vise, I've been using the plane stop and a wooden hand clamp for edge planing. It works well in most cases and I'd almost fore-go my dreams of a Benchcrafted leg vise if not for the sliding deadman I built into the new bench.

Well that and eventually working with wider stock. 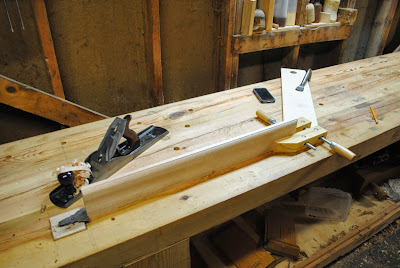 Everything was working well, until the pine block holding the plane stop dried out a tiny amount, or the bench top changed a little around the stop hole. Not much but enough to affect the movement and make it loose especially when it's set around 1/2" high or lower, which is most of the time. I thought through my solutions, from making a new block to installing some ball catch or spring plate hardware.

In the end I went a bit low tech and simply glued a couple sheets of heavy sketchbook paper to two faces of the block like it was a sheet of veneer. 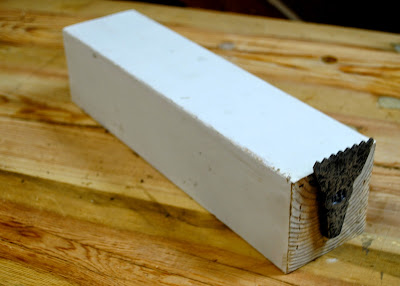 Problem solved as quick as the glue set up and I trimmed the paper I was back in business. There is still a little slop so I'm considering adding another paper thickness or so to refine that, but it works much better now at any rate. 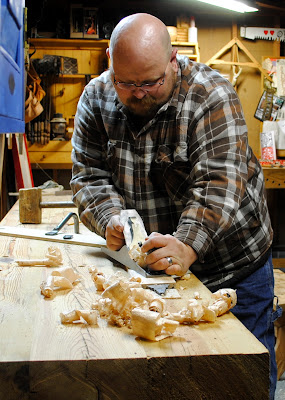