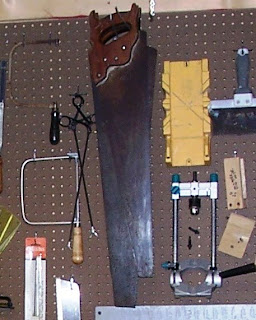 Several years ago, near the beginning of my woodworking adventure, I inherited four handsaws from my wife’s grandfather after he passed away. For several years now, they have hung on the pegboard of my shop, admired for their history and quality, but basically ignored for use in favor of my tablesaw. Recently I’ve had to move to an incredibly small shop (5’ x 9’ and sharing space with a door and stairs) and my tablesaw is now in storage. Woodworking is still my sanity and I have vowed to adapt and discover for myself how to work nearly exclusively with hand tools. This means that those saws I admired from across the room are coming down off the pegboard and set to go to work again.

In order to allow these saws to go to work again, I have realized I need to do some serious rehab with these long forgotten souls. They may have been well loved and used, but they were not consistently taken care of. Grandpa Setles was many great things, I loved him and everything he taught me, but even he would have referred to himself as a tinkerer, doing a little of this and a bit of that. (Which just happened to include the occasional furniture piece made from scrap and recycled lumber) He was the kind of guy who found and used things as they were. The saws are not in horrible shape, they’re pretty decent, but with some extra effort on my part, I can turn them into champs. Now, as I think about it, having to teach myself this stuff may just be one of the best lessons Setles ever gave me. I can almost see him laughing to himself right now. He probably is. 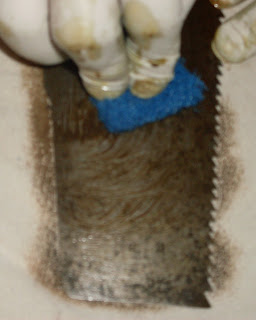 The process means teaching myself how to restore and upkeep these beasts. Including the removal of patina, or rust, and the reshaping and sharpening the teeth. If you’ve read along before you know I recently acquired a good saw vise, set, jointer, and files needed to do the work. So there’s no excuse to wait any longer in the process.

I did post about doing the rust removal on the oldest of these four saws, but when I left off the blade was still leaning against the wall, coated in oil and waiting for the next idea before sharpening. The question was this:
“Once I get the rust off these old boys, what steps do I take to keep the rust off them?”

I mean they are tools after all. They’re meant to be handled and used. So what could be done to keep the moisture in the air and the oil from my own hands from turning them brown again and requiring this intense cleaning process again? It hasn’t been a bad or difficult experience, but it’s not something I want to do twice a year if it can be helped. 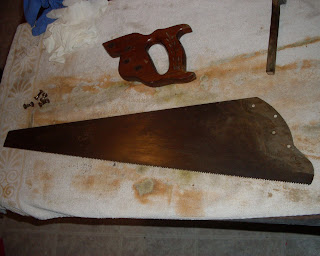 I started thinking about the problem in terms of other steel I use. The pieces of my armor I use practicing Medieval Reenactment and Western Martial Arts. There is a product that other armor wearers have suggested to help keep the rust off the steel, it’s called Renaissance Wax. It’s even used by museums to coat swords and armor because it will easily buff to a clear coat and wax will repel to moisture that is the bane to the steel. I have not yet sprung for the product as I can just keep my armor coated in a layer of gun oil when not in use, but a constant coating of oil on saw blades is just not practical. For one, I will use the saws more often than the dozen or so times a year I strap on my armor, and two oil on the saw blade could potentially add a stain to the wood it’s cutting, leading to discoloring during the finishing process. 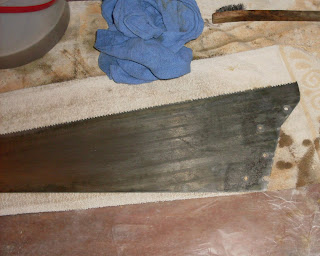 Now I wasn’t about to run out and feverishly buy a can of Ren Wax. What I had to do was figure out a less expensive alternative. What I do already have in my possession is a couple sticks of saw lube or saw wax. It’s used to lubricate a saw blade and help it cut material better, It also works well in the place of soaping screws to get them to drive better. After thinking it through, I believe I came up with a system that will help keep the rust off and just require the occasional recoating after vigorous use.

1. Removal of the “patina” using a Rustoleum rust remover intended for auto-body work. This product worked pretty well, it’s kind of a semi-gel consistency that was very low odor, low enough to even use inside. I spread out a thick coat on one side of the saw blade and let it set up for 5-7 minutes.

2. Then I went to work with a wire brush, scrubbing first in long strokes along the length of the blade and then in small circular patters until I felt like I had picked up most of the rust. I then let it set for another 2-3 minutes and scrubbed again with a scotchbrite pad, though not as aggressively as with the brush. If I came across a spot that was still a little thick, I hit it again with the brush until I was satisfied.

3. Following the directions on the product, I removed the lifted rust and left over solvent with water and a cloth. After soaking it down, I dried it off with another cloth, flipped the blade, and repeated the process on the other side.

4. With the rust removed from both sides, I got a clean surface (another towel) under the blade and applied a good coating of 3 in 1 oil to both sides. My thinking on this step was that the oil would help push out any remaining water and moisture. I applied the oil thick, then wiped it down to a very thin coating 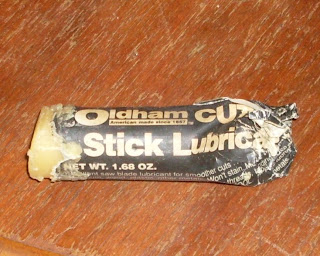 5. I then took a stick of saw lube, or saw wax. (I’m not sure the mixture that makes it up, seems more malleable than paraffin, but not as wimpy as beeswax . . . maybe it’s a mixture of both?) I rubbed it all up and down the whole blade, driving it into the oil that remained in the small scratches and imperfections in the metal. I then took a soft cloth and buffed the heck out of it by hand, mixing the oil and wax together.

I did not end up with a clear finish and I guess I really do not care; these are tools after all, meant to be used and beautiful in their utility. I don’t care about a fresh off the shelf, new out of the packaging, right off the assembly line look. I care about their usefulness and preservation. What I got was a good technique that is straightforward and repeatable. Really, you cannot ask for more than that. 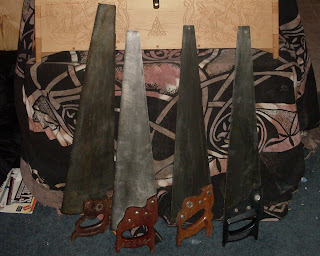 The next task is reshaping and sharpening the teeth one saw at a time. We’ll see how that process goes. I have been able to take a closer look at these saws than I ever have bothered to before and they will take some work. I think they will need a good amount of filing to get back on the straight and narrow, but I have already found some good sources on the process and I’m looking forward to starting. So then, until next time.