Well tonight I finished up a chapter in my hand tools saga. I have finished the pair of bow saws, one wide and one narrow. I realized I just posted a list a few days ago that contained one more saw, but with some thinking after my experiences tonight I have decided to shelve the frame saw plan for a while. After doing some work with the band saw blade I used for the narrow bow saw and planned to use for the frame saw, I am not sure that I can build a frame that can take the pressure required to hold the tension to keep the blade straight. I believe I will have to think about the project for a while longer. But there is no need to hold up progress while I think about it. I'll forge ahead and start work on the next chapter while I think, the next chapter is refurbishing my hand planes. 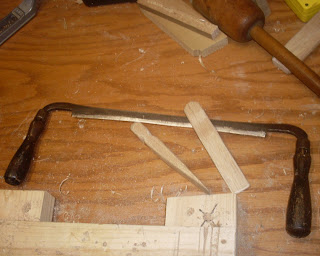 But on to the twin terrors. Tonight was their night to be finished. I started by finishing shaping the last piece. One more toggle that I shaped with the draw knife and placed a groove with a small rasp. Then I assembled the saws by dry fitting the tenons and pinning them with a finishing nail that will hold them together and yet also act as a pivot point, allowing some play in the joint to better place tension on the blade. The nails are of course thicker than the board, so after they were driven through and flush on one side, I flipped the saw over, cut the nail as short as possible with a pair of aviation snips, and peened over the other side kind of like a rivet. 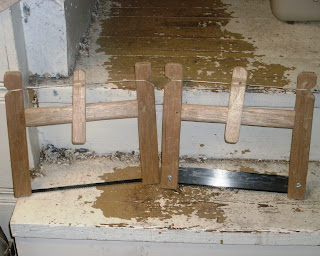 Then I placed the blades, pinning the broad blade with a couple of the screw rivets I had extra from the dado saw project. The narrow blade was pinned with the same finish nail technique I used to pin the tenons.Then I ties the string, some masonry string I had around, then I placed the toggle and twisted them up until they creeked. 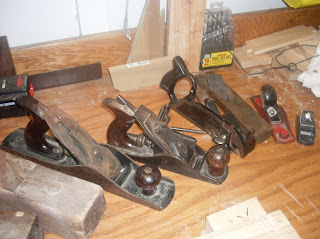 I still have 2 saws to sharpen yet, and I think the broad blade bow saw could use a touch up to get it to cut better, but over all I am finished with saws for a little while. It has been fun and very educational, but I feel ready to move on to the next thing. So with that said there are two things to start on the docket tomorrow. One will be beginning the work on tuning up my hand planes, and the other will be working with my nephew Bailey to create his boy scouts pine wood derby car. Probably the scariest project I have undertake in a long time as I have never made one of these before in my life and he knows my shop, I think he has high expectations, I only hope I live up to them. Like my work with my girls on their self designed projects, I will make him do the majority of the work. The hands on is good for kids. Actually I'm kinda looking forward to tomorrow. Forcasting a good day and you'll hear about it here.