Heaven can be a warm woodshop in the middle of a Wisconsin winter. Today I used a little of the tax return money to splurge and buy myself a small space heater for the Wood Shop Jr. After a few hours, I was even able to shed the insulated flannel and work in a T-shirt and shop apron. Sweet! 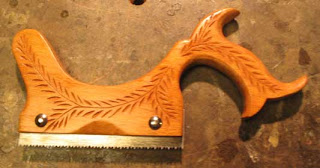 Further progress on the stair saw or dado saw. Again, thank you to the Norse Woodsmith Blog for turning me on to this saw. The interesting step to me was cutting the teeth of the saw from scratch, Of course I had no true idea how to start this, and thus experimentation ensued. First, I clamped the five inch stretch of saw blade steel into the saw vise, (a section of steel pillaged from the carcass of a cheep box store backsaw) I started by just trying to drag the triangle file across the edge, but I found it difficult to keep the file in a straight line and gain any progress. I gave up quick because I did not want to wear down one section disproportionally.There was better ways to do this than to eat up a whole file. 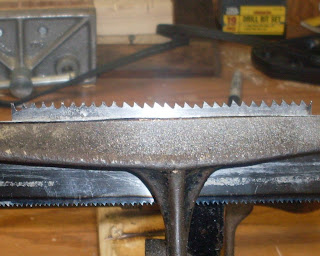 I knew I needed to create a way to get a solid purchase in the steel to keep the file from jumping around and give it a chance to cut the teeth. Into one of the toolboxes, I go digging . . . up I come with a hacksaw. Did I mention I hate hacksaws? They have a particular way of taking all the possible forward moving human exertion required to create a cut, transferring it into a series of nonsensical, side-to-side gyrations that would not provide a consistent cut into pudding. Can you guess that it didn’t work… I knew you could.

I knew there had to be an easier way to do this, and I knew it was sitting right there on the bench, staring at me like the wiggly eyed pile of money that works for a living in those Geico adds. The angle grinder I used to rive a once complete saw blade into the sections needed to make a wide blade bow saw and this stair saw. Well, I figured, what the hell have I got to lose? Plugged it in, fired it up, and cut a series of “U” shaped  groves, maybe little more than 1/16th of an inch deep. In a matter of a minute, there was sweet satisfaction. Then I went to work with the file again, reshaping the U shapes into satisfying saw V’s with a 20* rake and fleam.

From there I went to work on the handle, actually, I went to work twice. The first attempt just didn’t work. While attempting to saw away some of the larger sections of waste I miss-cut and left a space about ¾ inch between the down cut and the side cut. Not feeling intelligent at that moment in time, I chose to try and grab a chisel and chop through the space. All I did was wedge it and create a crack that ran across the front push knob and split the section free. Still feeling stupid I decided to try and repair the mess by drilling for a couple of dowels and trying a glue up, of course it didn’t work. I thought for a few seconds, decided to set my frugality to one side, and re-cut a new section of poplar for a new blank. 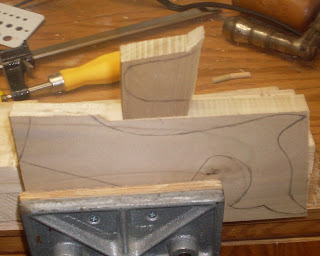 The grain on the next section was much better anyhow, I was much happier. I traced out the pattern that I printed off the web and modified to my grip, using the open grip saw handle I finished a few weeks ago as a judge for my hand. Then I went to work with the coping saw. After the shape was released from the wood, I spent the next few hours shaping it with a series of rasps, scrapers, and some sandpaper. I have to say that work was very satisfying, different from the majority of work you do as a general woodwright. 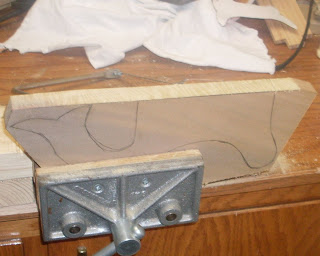 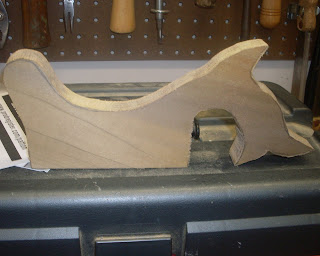 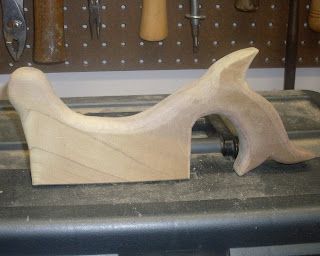 After cutting the saw kerf to accept the new saw blade I called it a night, I don’t have any more rivets right now to set the blade tonight, and I’m thinking of finding an alternative to the permanent rivets for a few reasons. First, the rivets were never the perfect answer; I managed to crack 2 out of 3 handles, no significant problems or worries, but not an outcome I want to repeat. Especially, after my first escapade with this handle tonight. Second, I am not sure of the depth I have chosen with this blade. Most of the time I will be cutting dado’s 3/8 inch deep, so setting the blade at that depth was tempting, But I didn’t want to take away the ability to cut deeper. Right now, the depth I stopped at leaves just a bit more than a 1/2 inch of blade exposed, I can see the possibility of setting two depths, one at 3/8 and one deeper, and being able to adjust between them by resetting the saw nuts. That way I can bottom out the saw and know I have the same depth on both sides of a dado. I really like this idea, makes me think if there is a design possible to make a sliding dovetail saw . . . hmmmm . . . I’ll have to think a while on that one. 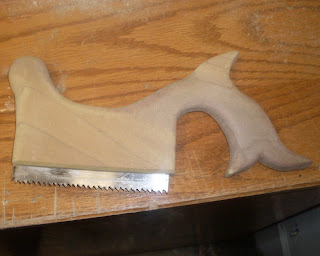