Life can easily get in the way of projects, I have managed to accomplish nothing in the shop for several days now. I do have some excuses I feel are legitimate though.

This past Monday we had to take our dog Ivy to the vet so she could be put to sleep, she had cancer and it progressed very quickly, she was a different dog two months ago, and the last week had seen her decline dramatically. It was very sad, and kind of sudden for the whole family, including myself, but the hardest thing was to have to come home after burying the old girl on my parents land, and tell my children what was going on. Ivy was almost 14 years old, my oldest is 13. The pair were peas in a pod. In fact my daughter Chloe could get that dog to do almost anything, my wife and I could try and try to get the dogs cooperation sometimes, and Chloe would just say "Come on Baby," and the dog would fall over herself to do what she asked.

Loosing Ivy was tough, but the most heart crushing thing for me was a few hours later, my cell phone buzzed with an incoming text. It was a few weeks ago we made the big decision and let her have her own Facebook account, and I set up things so I get a text message on my phone with any of her activity, (she's only 13, you gotta keep track of 'em) her message read, (I'm quoting exactly) "possubly the worst day of my ife scratchy that THE worst day of my life"  Chloe is an "A" student and every bit the perfectionist I am, for her to post like that and not care about how it was spelled or read, that speaks a volume by itself. That just breaks your heart when you know your baby's hurting like that. . . I knew she would take it hard, but I did not expect to hear it expressed like that. I suppose I remember being 13 myself. At that age every emotion is profound. 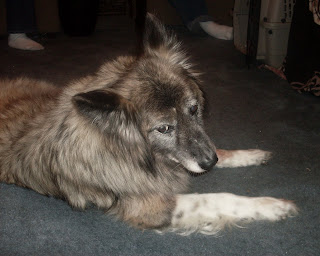 Thank you girl for all the love you gave. We will all see each other again someday.

So, pretty much the weekend and first half of this week sucked. I needed something to kick start me back into motion. Nothing will ever quite accomplish that like the smell of new lumber acclimating to the shop. I bought a little over 50 dollars in pine today. Enough for a pair of saw horses and most of the joinery bench. The local Menards is having a sale on 1X boards as well so I may pick up 10 or so 1x8s for a future project in the next few days. But as I think about it in relation to this blog experiment of mine, I think this may be a good chance to document the process I use in designing a piece. I will not say that I am always on with my design abilities, developing that takes time and requires mistakes. I try to do as much sketching and drawing as I can to minimize those mistakes. 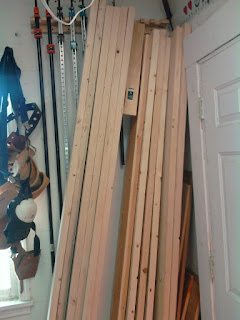 Sometimes that requires many drawings, sketches and scales, sometimes just a few. I will try to document this method of work as I go along with the sawhorses I will design from scratch. But I do have a few things I have to finish before I can start making some saw dust, this is incentive to hop to it.

I do have one more idea that I am going to do some more thinking on. I watched a documentry the other night on TV about Japanese Samurai, and the lasting influence of "The Book of Five Rings" written by Miyamoto Musashi in the mid 1600's. I own the book enjoyed reading it int he past, not as a guide to martial arts but as a philosophy of living. I have read other related books, The Art of War, and the Hagakure, but I have not read Five Rings in a long time. As I watched the program I felt myself wondering if the philosophies of one art would relate universally to another and if there could be a correlation between things. I know enough about far eastern philosophies to know that no truths exist in a vacuum, and that all things are related in their lives. I am going to see what I can pry from the words now that I will be looking with new eyes.

I think I will leave off here with one of my favorite quotes from Samurai philosophy, one I think of quite often. It is from the Hagakure, a book of maxims written by an old Samurai named Yamamoto Tsunetomo,

"There is something to be learned from a rainstorm. When meeting with a sudden shower, you try not to get wet and run quickly along the road. But in doing things such a passing under the eaves of houses, you still get wet. When you are resolved from the beginning, you will not be perplexed, though you still get the same soaking. This understanding extends to all things."

A lifetimes lesson in dignity and patience summed up in a few lines. If that's not woodworking I'm not sure what is.