Pros and Cons of a Day in the Shop

Well, I couldn't control myself today, I skipped the saw handle I promised I would make, and since it was such an awesome day out worked some on the saw horses instead. It feels like spring now that I'm tackling a real project. As practice for doing the ren faire shows this summer, I have decided to build these monsters using only hand tools. Usually I'm a hybrid kinds guy, little hand, little 'lectric, but there's a purpose here so I'll do my damndest to stick to the principal though I think I hit my first stumbling block. More on that at the end.

I started the day by cleaning up the shop, I had a ton of shavings on the floor from testing rehabed planes. (god damn it's fun to make shavings!!!) I got them all swept up and in the trash, ahhh nice clean shop.

Then I took out the 2x12's I bought for this and began to measure and cut for my rough pieces. Two 3 foot long sections and 4 18 inch sections. The other thing I have done without so far is the modern contrivance of measuring tape and pencil. Instead I have done my markups with a pair of dividers and a scratch awl or marking knife. My rosewood tri-square had some inch gradations on it and I will have that with me a faires, so I thought it was fair to use them to set the dividers at 6 inches and step things off. I'm not sure how absolutely accurate my measurements turned out, but I think I have to let go of that anal side of myself for this stuff. Measuring out what looks right, and going with it. Using one cut board to get the matching length for another, works just fine. Who needs a tape measure anyhow? 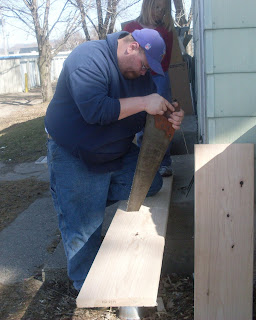 This is really the first time I have ever concentrated on breaking down my stock using a hand saw. I have done plenty of reading lately, and the blogs of all the hand tool junkies out there have helped give me options and knowledge (thank you!!) I tried a couple techniques but felt most comfortable starting the cut traditional and then switching to an overhand technique. One of my newly sharpened crosscut saws worked out great, followed the line and moved the saw dust out. You gotta feel good when something you worked hard to learn pays off. Since I was building the saw horses, I decided to use the steps to hold the board . . . hmmm I though, I can't clamp it down here . . . no hold fast . . . out came my faithful shout that usually brings me some kind of help,  "I need a girl here!" two out of three daughters responded. You can see Infinity, my youngest, dutifully standing on the long board and providing balancing weight to the wood, and my middle one, Fayth, took on the photo-journalism responsibilities. You can also see that as I cut I am tending to tip the saw away from me. I am not sure if this is good technique or not, the experts out there will have to decide, but I sure liked the way I felt in control of the saw and where it was cutting while I did that. Either way this was all too much of a work out for a fat man, I think I should try to do it more, it could help, or it could only make me more hungry, life is a vicious circle sometimes. 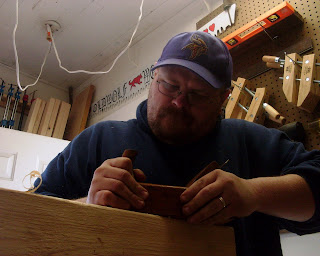 With the boards cut down to length I took them into the shop and started planing the edges down square. removing the rounded corners the mills put on them. I never have quite understood the reasoning behind why they do that extra tooling like that, you'd think less tooling would mean less investment, maybe its because a board with rounded corners might play an optical illusion and look straighter and closer to true than most of their twisted crap would look with squared corners. I don't know. Either way, I'm taking it down to square.


Now you get to see the hell that the Wood Shop Jr. can be for me, I have three reasons from today, The first two are illustrated in this picture. 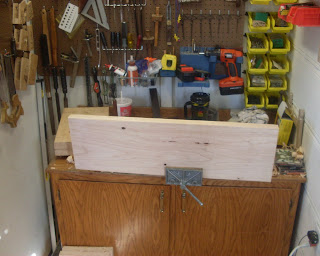 First off, edge planing a board that is three foot long in an area, maybe five and a half foot wide, it sucks. I banged the toe of my #5 into the wall on the right of the picture a dozen times. I am shocked I didn't catch one of my fingers. The other reason is all I have right now is this little wimpy vise. It works OK for a lot of things . . . but seriously not for this. I had the sucker tightened down as hard as I could, and it would still lever out and drop one end down while I worked with the plane. That was frustrating The third reason is shown here: 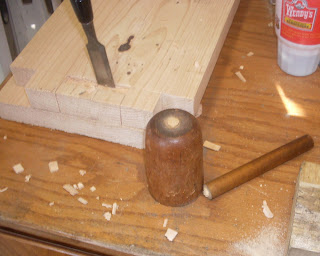 One of my bench mallets, a two piece joined one I picked up with a lot of four mallets off eBay about a year ago, broke while I was chopping out the center between two tenons. I have used this mallet a lot and I never had any cracking or sloppiness that warned me the head was going to go. I blame the fact that I have to work off a cabinet top instead of a real workbench, It's like pounding into a trampoline in comparison. I feel the energy of a blow come back into the mallet all the time instead of traveling through the chisel and into the board completely. Thus I probably swing harder than usual as well. harder hits and bounce back energy, I wonder why this didn't happen sooner. . .  oh well, we can fix this, we have the technology. 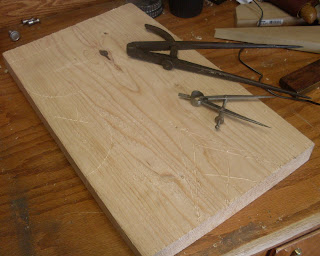 Next I laid out the cut outs I wanted for the legs. I believe if you click on the picture you will get a larger resolution that shows the scratch marks for the layout. Again this process was done all with two pairs of dividers. This is a big change of thinking for me. I am usually pretty meticulous and have been known to draw out grids and use carbon paper and templates to achieve that "perfect symmetry" but I have come to realize through just this process today that I should just trust my instincts and my eye a bit more when it comes to this kind of stuff. If it looks right, then it is right. and if I'm really trying to recreate something medieval then I need to work harder to trust the craftsman inside myself and let him do the work rather than over dissect what I want it to look like. 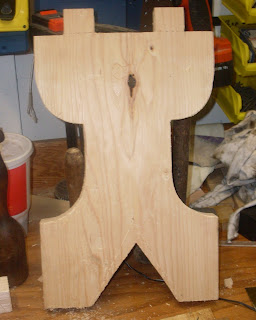 In the end, it turned out OK. I like the proportions. I shortened the triangle cut out below on the fly and it was a good decision. It has a vaguely medieval style and feel to it. I used this one to mark out the other three remaining legs. Then I decided to try and solve my last problem. Carving the designs into the legs.

In the past all my carving has been done with a dremel style tool and burrs. Again, I want this to be hand tool only so the dremel is out this time. The trouble is the set of carving tools I own are crap, serious crap. Cheep Buck Brothers BORG P.O.S. crap. I should just throw them away for all the good they do. I just want a couple that will do some basic work, that will sharpen well and that I can get some experience and grow from. I thought I would try to make due with what I have in the shop. Maybe I can do it with chisels I thought, I have some small, spoon type scrapers, those would help. I've got to be able to make something work.

Forget it, this is the frustration I was talking about at the beginning of this post. For all the distance I've come there is just one more hurdle, one more tool that I need to do what I want. . . I suppose it will end one day, just not today. I just spoke with my wife, This weekend we will be making a trip to the Woodcraft store in Madison so I can pick up two or three decent carving tools. Any suggestions?

I guess that will be all for tonight, Cheers!