Friction Tape and the Infinite Search for a Better Way 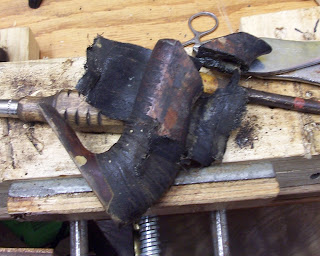 Well. . . my plan was to get farther today than I did. Everything is ok though, I did finish one project. I managed to get the two planes I got off eBay cleaned up and set to rights. It took a little longer than I thought it would because of the tote handle on the #5. When I pulled it from the box it was wrapped tight, head to toe, in friction tape. The same type of tape used to add a grip to hockey sticks and sporting equipment. Well I couldn't have that and I knew what my chances were when I started chipping the old crap off. I have seen some instances where people will tape up plane handles to increase their grip, and quietly that is the situation I hoped for, but in my gut I knew better. Broken. Not in one place but in two. The front knob was split in twain as well and taped a little more subtly, I decided to leave the knob alone and focus on the tote. Somebody must have really dropped this baby a while back. 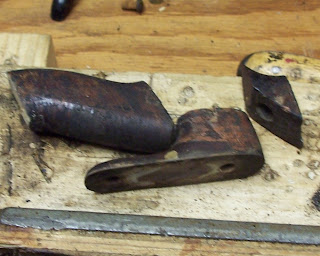 After I peeled away all the tape I took some heavy grit sandpaper and a curved card scraper to get rip of the residue, and consequently most of the finish (not that the finish matters a whole lot to me on this one. There was old crystallized hide glue in the breaks that I chipped out with a scratch awl. 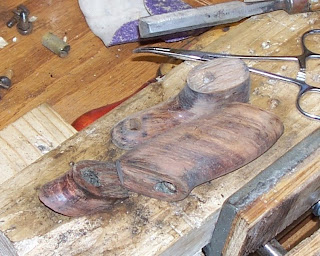 Now it was decision time on how to try and fix this without friction tape. First I thought about using some of the expandable poly glue (gorilla glue) but tote handles are their own problem when it comes to placing a clamp on them. Especially with two breaks in the wood. Eventually I decided to go to my old repair standby, JB Weld. mixed it up, smeared some on, set the pieces together, and placed them back on the plane body, Using the seating screws to hold pressure enough to let the epoxy set. I will leave it alone for a few days and see how it holds up. Keeping my fingers crossed. 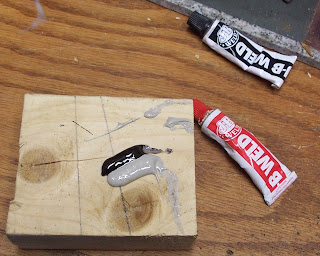 The rest of the day reshaping and sharpening the plane blades. I hate using my bench grinder on plane blades, and the water stone grinder I bought a couple years past has never really cut it for me. I have been on the search for the perfect, cheep, sharpening system for a million years or so, earlier this year I decided to give the sandpaper glued to a flat stone tile system a try, and it worked better than anything else I had ever tried. Today I decided to use just the sandpaper to reshape, sharpen, and hone the blades. My arms and fingers are paying the price tonight, I must have made a thousand passes with each blade over the course paper to set the cutting angle I wanted. But I got it done, and it was done accurately, and from here on out it will be simple honing to sharpen, the hard work is over.

I didn't get to making the saw handle I wanted to today. That got pushed back to tomorrow, Either way I got something done in the shop today, before I came upstairs to take a break and found my next eBay conquest. 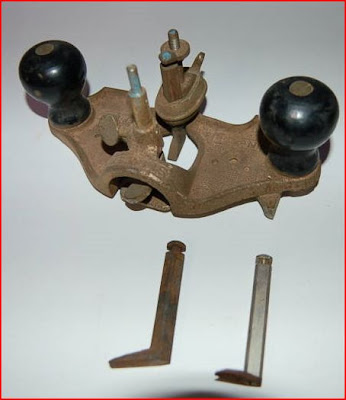 I think I may have to call it quits now for a long while. I can do the things I wanted to do with a plow plane with this router plane. Once this one gets here and gets cleaned up I think I will get all my planes set out and arranged for a couple of vanity shots. That would be kind of fun,