I think it may just be an addiction. When I purchased the horned German plane a couple weeks ago on eBay I swore that would be the last one for a while. Quite a while. In my last post you saw the pictures inside the drawers of my craftsman chest. There's just no more room at the inn. But there has been one more style of plane I have been seriously thinking about though. Well two more actually, the other being a router plane, but I can wait with that one for a while . . . unless an incredible deal comes by  . . . Muhahahaha (that would be an evil laugh)

The plane primarily occupying my recent obsession is a plow (or is it plough) plane. This was primarily fueled by two bundles of kindling and oil. One is the blog Matt's Basement Workshop, where I was cruising around and checking out some older content the other day and watched one of his older pod casts on the very devil I had been dwelling upon. He was using a very nice Veritas Plow Plane and it was very convincing to me. The other fire-starter is a little bit of info I read about a while ago, that said the primary means of side joining boards in medieval times was a simple tongue and groove or a groove and spline joint (as opposed to modern biscuits) Now I have not had the chance to verify this with any recent research, it is something I remember reading and I don't even really remember where for sure, but it does seem to make sense to me.

The eventual purpose of my recent push into more hand tools and away from my hybrid roots is the ability to try to recreate medieval woodworking in a demonstration type setting, the ability to join boards this way would be important. I have a filister plane to create the tongue, but the groove from the plow plane would be the missing link here. After talking it over with my wife I have begun the search. First I looked at a nice new Veritas, but at $225, it is out of my league right now. I found another off brand for around $150. and several on eBay for various prices. Needless to say the search continues and I will decide on something sooner or later here. When it gets here I will have something to say about it I'm sure.

The thing is when you are looking for planes, you see lots of planes, and you kind want to see them all. If you're a woodworker, or similarly on day release from the local asylum, I probably don't need to explain it to you. If it's not planes, it's always something else. I've seen plumb bobs, router bits, and hand saws. Everyone has something and I fear that I may be falling under the influence.

So then, to place it into recent terms where I used the line, "Once the avalanche starts, it's too late for the pebbles to vote." The pebbles are the search for single plow plane option that balance a reasonable price (as I see it) with quality. The avalanche that follows is finding some irresistible opportunities in planes I'm not directly looking for.

Tonight I made an eBay purchase of a pair of planes, a #5 and #6, They may or may not be Stanley by the limited description, but the pictures were enough to convince me this pair would be a reasonable tune up job and would be ready to go. Over all, with shipping and handling, I'm out around $20 counting shipping and handling, and since I already have a #5, if I decide I don't need another one, I'm sure I can my $20 back by selling it. But my avalanche here is that I had just finished tuning and setting all my planes to usable form, and now I have two more to work on that will be in the mail, and coming my way soon.

In the end, I suppose that spending $20 on two planes is a deal too good to pass up, even if they end up just for parts, but that's not really the point. The troubling thing is that I almost couldn't help myself when I saw them, This may be a slippery slope. 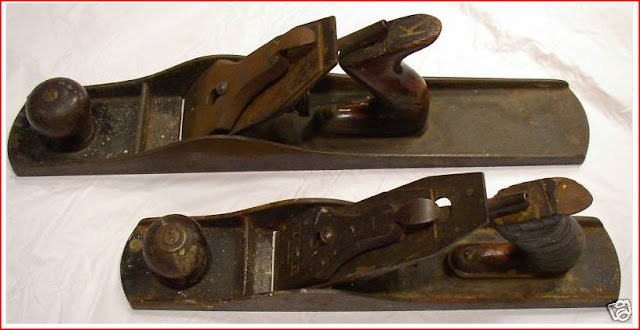