Success Can Be So Sweet

I got off work an hour early today, a nice surprise, picked up my wife from school on the way home, and jumped into the shop. I was a beautiful Wisconsin pre-spring day, hitting the 40's. In fact, today was the first day I had to back off my little shop heater's thermostat off of full blast. Very nice indeed.

I felt productive by the end of the day too. I already spoke about how much I dreaded the plane tuning process, but my success the other day inspired me to forge on, No stopping me now, I upgraded my sharpening capabilities since then as well. When I sharpened the plane irons from my two big metal body planes the flattest thing I had to use in the shop was a small section of plywood. Not ideal, right? Well I took a little stop at the local Menards on the way home and picked up a 12x12 granite floor tile and some spray on adhesive. Stuck the sanding paper down to the tile and tah dah... instant flat surface and plenty of space to move from grit to grit. It worked very well. I have to say that I have had a lot of frustration in the past and a lot of indecision over sharpening systems and what not. but the sand paper technique appeals to me. It's economical, repeatable, and so far I'm finding it easy to get good results, and after this initial tune up of all the plane blades, it will be just down to honing them from here on out unless I decide to change an angle...

I tuned up all the planes but one of the wooden jointers. The blade from that one has some pretty good nicks in it for one, And for two I was feeling a little tired, I had spent four hours sharpening and scrubbing rust, and I didn't want to burn out and rush through it. So I shut things down and went upstairs. The only thing I am not happy about today is I purchased a little block plane at a flea market this last weekend, I got the blade cleaned up and figured out the dumb ass had put the blade in upside down when he reassembled it after cleaning it. I guess I'm kind of a dumb ass too because it took me a half hour of playing with the thing and thinking, "None of this seems right" before I figured it out myself. Sharpened the blade but the thing just doesn't cut right...I guess I'm gonna have to play with it a bit more.

One more plane coming down the pike. For 15 $ I ordered a German Style scrub plane on eBay the other day. I's in the mail to me as I type this. It's one of the variety with the big horn on the front. I'm going to put a curved blade on it to make it really aggressive and that will be a good initial plane to remove a rough stock fast and prep it for the following planes to finish off the work. We'll get that puppy sharpened up and be good to go for a while. I would still like to get my hands on a router plane, a plow plane, and a matched set of tongue and groove planes, but for now I think I'm sitting pretty and unless an awesome deal comes along I'm gonna stay put for a year or two. I am thinking about storage and other options for myself in the shop though. The craftsman cabinet I have used for my planes has worked OK until recently, I find myself going after them much more often now that I'm in a hand tool only shop. and the cabinet is mostly annoying for that. I am thinking of pulling the peg board down off of one wall and puttng up a hanging tool cabinet kind of like the one Chris Schwarz made for popular woodworking mag, lets see if I can go steal a picture...brb. 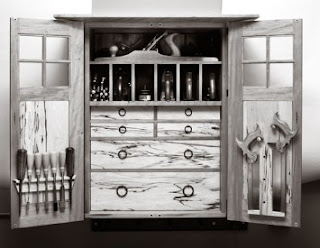 I think this will work fine, give me some good looking storage space, and I think I may ocnstruct a saw til to hang directly next to it. Some shelves for the hand power tools and I will clear both the fake oak cabinet and the craftsman chest out of the cramped space and back into my storage with all my other full size tools. I will replace the fake oak cabinet with the small Joiners Bench, also featured in Chris Schwarz's blog. This will be constructed to also easily knock down so I can use it to travel to do demos at faires, and so I can move it out when it's time to find a house to live, with a garage. God that will be so nice to have a full shop again But until then I will keep plugging away where I'm at. Sorry no pics from in the shop tonight, I guess I figures they would be pretty boring anyhow. The whole "this is how I sharpen my plane and my wit" thing has been done ad nauseum elsewhere and done better than I could.

That brings me to one more thing this evening. I really like the relatively new blog adventure by Adam King called the Woodworkers Journey. I was introduced to it via a spotlight on the Spoken Wood Podcast, (If you don't listen to it regularly you should, what are you waiting for!) Mr. King recently did a video post he called the "State of the Craft 2010" Very well done, thought provoking, and inspiring. Quite the innovative idea to shoot the video while he is walking along the street. He spoke quite a bit about the possible demise of woodworking print media due to it's not incorporating its existence into online access to the writers and content, and I can see his point. As a relatively young man (33) I have never contemplated sending a letter to the editors for a follow up question or comment on an article. I did at one point email a question to Chris Schwarz, but that was after I had posted my question in a couple of forums and received no real help. Mr. Schwarz did answer my question nearly right away, unfortunately the answer was an I don't know for sure, but here's who you could ask. Proving to me why it's no wonder Mr. Schwarz has a relatively loyal following online. he's a real guy who's not above shooting off a couple of answers to questions he gets sent.

The point is Mr. King had some good and possibly revolutionary ideas in his video. I'm interested to hear more about what he has to say on the subject. I hope this is not a ruffle the feathers and get outta town kind of thing. Bloggers and forum posters as the new authority in woodworking thought. I do understand his point, I myself have drank from the well of collective knowledge that is Lumberjocks, and lord knows I keep up on almost every woodworking blog I can find out there. But for me these things are more for inspiration, and somehow I have trouble equating the word "authority" with "inspiration" Maybe Authority was a poor choice of words on Mr. Kings part. If he's used inspiration in its place, I would be more inclined to bite harder on the bait I'm only nibbling on now.

After all that is the only reason for my blog here. It is not to teach, advise, or do anything other than relate and maybe inspire. It works as an inspiration for me and that is reason enough to continue plugging into the keyboard and plunk away at it at some regular intervals. If you spend sometime reading along here too, and maybe find some inspiration, then that is all the better.

Maybe Mr. King is on to something, time will tell.