Well there was not much sawdust this weekend. Thursday I did manage to get the second saw horse glued up and I spent a little while Saturday cleaning up the glue squeeze out and doing a little additional surface smoothing and today I got the Danish Oil on her. Starting tomorrow she'll be good to go and I can start on the Joinery Bench I need. So not very productive, but it spent most of the weekend raining here in Western Wisconsin and not being able to use the outside is like not being able to use half of my shop.

Love this pic of one horse atop the other, both inverted. 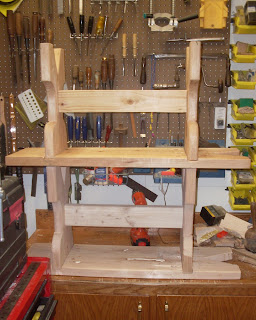 However we did have several errands to run this weekend, and I did manage to add a few things to the itinerary. I got a call from my mom about a rummage sale in the nearby burg of Sparta that she said had a lot of tools. We took a drive out there, and it did have some tools, but the only thing that caught my eye was a saw vice, It was in pretty rough shape and I already have a pretty good one, so I let it go. There were some other nice Lumber Jack saws, one and two man, but I just didn't feel like dropping 30 dollars for something that would just be a novelty. 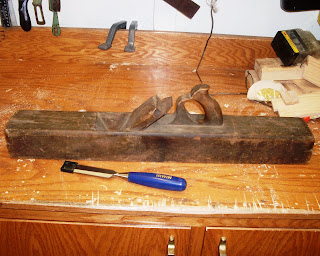 On our way out of town I did decide to swing by one of my favorite places. There is a little store by the interstate that sells a combo of new, used, and antique booths. It's a fun hodgepodge kinda place, and I almost always find something there. This time I really did. I found an old woody joiner, 24 inches long, I tried to get the plane blade to pop out but I couldn't get it to budge in the store, maybe that's why it was only marked 15 dollars.

This morning I played with it a little in the shop, thinking I could get it out with a couple hammer taps. Boy was I wrong. It took me a half an hour and the sacrifice of two drill bits to get the blade out. Near as I can figure the wood of the plane must have dried significantly since the last time it was used. The plane blade is obviously the one the plane was made for, all the cut outs in the body and the wedge are exact for it, it was just pinched on the sides. Like when a box constructed of green wood and nailed and as the wood dries and shrinks it grips the nails until they are basically a part of the board. This made me think of that.

The only thing I could do was use a drill bit like a punch, (I didn't want to use a hardened steel punch, I was hoping a drill bit may somehow damage the blade less) place it against the cutting edge of the plane blade and pound the blade out through the planes mouth. Even after pounding the blade half way out, it would not budge. I had to hammer until it was completely free. There are no signs of the blade being forced in by some well meaning antique dealer, that's what makes me think of the wood shrink theory. 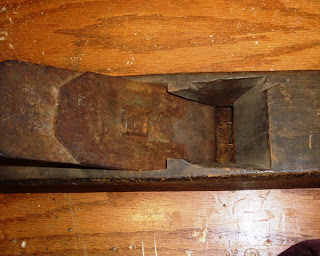 Some PB Blaster was needed to get the blade and cap iron unscrewed from each other and then I was able to take a look at the makers mark on the blade. It reads "W. Butcher" in an arch, with a crown mark underneath, (which I understand relates to it's manufacture in England) and the "Warranted Cast Steel" I did a little research on the net today and found out about a William Butcher who made tool blades between 1822 and 1870. But from what I could find about his makers mark it was his name in an arch, then an arrow pointing at a small Maltese Cross, and the "Warranted Cast Steel" below, This made me stop as I could find no reference to a crown. I wonder if this blade may be different in some way,

I usually use a wire brush on a drill and scrub away all the rust and patina back down to shiny steel. I do this because I buy these planes to use them, not to collect them, and a rusty tool will never work as well as a clean one. I always try to do some research first because I don't want to be That Guy, who destroyed a rare piece of history because he didn't do his due diligence first. If anyone knows anything about the difference in the makers marks I would appreciate a comment or even an email. Even if you have a good idea where to go look or who to specifically ask. Please give some help if you know. But that was not the only game of the weekend hunt. There was a big Flea Market at the Lacrosse Center today, and like most flea markets, 95% crap, 4% interesting, 0.5% I'll think about it, and 0.5% OK I'll buy it. I did pick up a few things. One was a Stanley sweetheart era No. 61 marking gauge, in pretty decent enough shape. 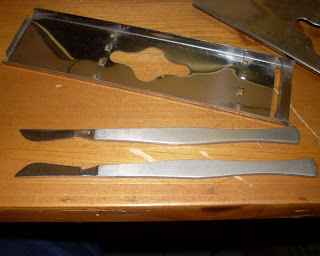 The other thing is probably only cool to me, but I have to share it here anyhow. I work for a living as a Surgical Technologist, what's that, we're the people who set up all the sterile instruments and supplies before a surgery, stand during and pass instruments during the surgery, and clean up after. I've done the job for 11 years now, and I still enjoy most every day, (lets face it every job has it's days where you wish it was time to retire) in the middle of my career I had the opportunity to teach surgical tech students at the local college for around 2 years. Teaching gave me a little more perspective on the history of surgery and it's instruments. Well I was able to pick up some of that history today and bring it home. A pair of surgical scalpels. Today, and really for a long time, surgical scalpels are reusable steel handles that you affix a disposable blade to. This is a pair of old scalpels where someone in my position would actually take and resharpen these blades after every surgery before sterilizing them for their next go around. I'm not sure when these date to, I have to do some more research on that, but for me they're pretty cool anyway. I'm pretty sure I'll think of something to do with them eventually.

Anyhow that's it from the hunting grounds, coming up next, as promised, a Joinery Bench in C Minor.Until then . . .  goodnight and Cheers!