The Easiest Mortise I Have Ever Cut

Finally, a relatively slow day for the Oldwolf Clan, slept in a bit, got up and watched a movie that's been waiting to go back to Blockbuster Video for a week, and hit the shop. Got to spend most of the day working there to. Pretty nice day if I do say so myself. 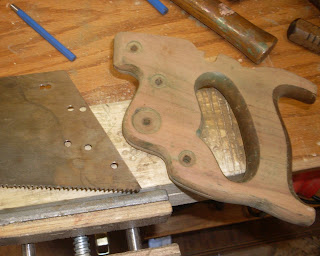 Started it out by fulfilling a plan I made a while ago on this blog. I was talking about the four full size hand saws I own, I call them the Four Brothers, The trouble is one of the four brothers was embarrassed, He is a good Disston saw, but he was just born in the wrong era, all he had to hold on to was a cold and heartless chunk of plastic. I had vowed to make him a new wood handle, but then the weather turned and I could take the opportunity to use some space outside to cut and begin the saw benches, The saw has waited patiently ever since. 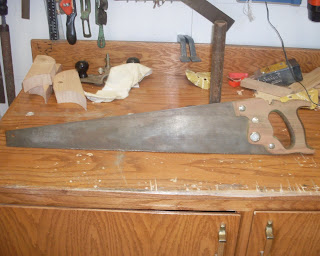 Patience turns out to pay off because yesterday I picked up several old saw handles at a garage sale. I went through the handles and chose the one I thought would fit best. Sanded off most of the green paint that was on the poor guy. Marked and drilled some new holes in the blade. (you can see the multitude of holes in one of the pics, getting the holes drilled was actually a little of an ordeal, some of those old saws have tough steel) Popped the saw nuts in place and Ta Da. Now little brother doesn't have to be embarrassed any longer.

Then I did a little rearranging on the peg board. I had my dividers and calipers all bunched up and on top of one another for a while. A few days ago I went to pull a hammer off the board and bumped one divider, and I'll bet you can guess the rest of the story. A couple of them swung about a bit and then fell down. All I could think was how I didn't want either of these casualties of gravity to get bent when they landed on the concrete floor. Thinking quickly and disregarding my own personal safety, I stuck out my foot to cushion the blow.

The point of my small divider is a pretty sharp point.

It bit me. Not deep, but enough to remind me what a dumb ass I can be sometimes, and that I should have taken care to set things up right from the beginning. Same ol' story. 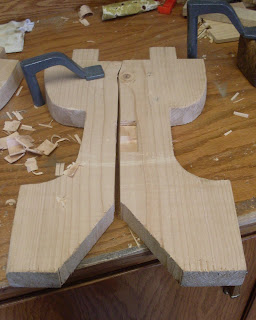 But then the rest of today was interesting to. I was working away on the saw horse. Gonna try to finish it up today and I marked one of the thru mortises on the legs and began to chop away with a chisel and mallet. A small crack in the wood developed early but I didn't think a whole lot of it. I had similar crack that I repaired on for both legs on the horse that's finished. All I did was finish the mortise, then spread the crack a bit, push some glue in, and clamp it for a while. Stronger than ever. Today the crack went from hairline to complete split in three blows of the mallet. I stared at the piece for a minute. The split followed exactly along the line of one edge of the mortise. Well this was interesting. I didn't see any reason I had to replace the leg from scratch, it's a saw horse for gods sake, and the split was clean with lots of glue surface. Only had to finish the mortise. 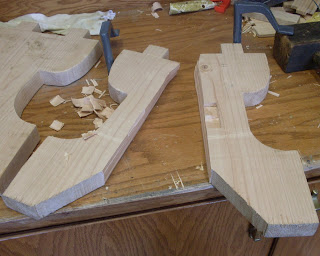 You see instead of measuring, when I don't have to be perfectly perfect but I need matching mortises in pieces, I'll cut one and use it to mark for the other. If I couldn't cut the other mortise I would have stalled out in the shop for the day and it was still early. 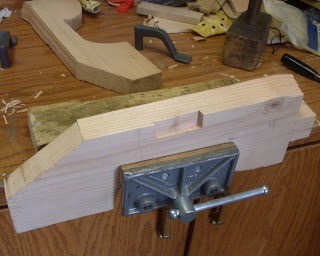 I put the vise on the table. Clamped in the leg, grabbed the backsaw, and cut a series of kerfs working to bottom out as square as possible. (but not killing myself for it, this is a saw horse not a highboy) Popped out the slices between the kerfs, cleaned up the side with the chisel, Fasted and easiest mortise I have ever made with hand tools 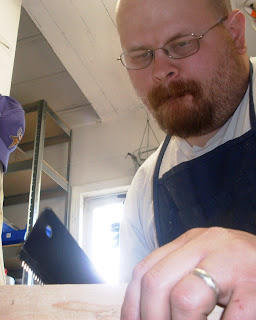 I was able to use it to mark the other leg, and that gave me something to work on while the glue and clamps worked their magic on the splitter. 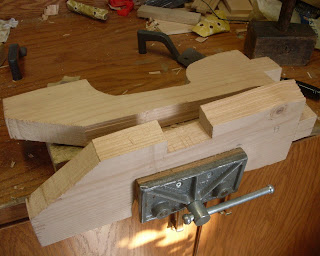 It sure made for an interesting way to check the fit of a tenon though. 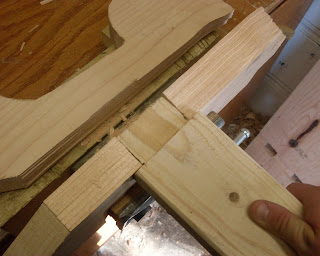 All in all an interesting day, but most days in the shop are. The glue wasn't quite set up when I broke to come upstairs, eat supper and update the blog. Here's hoping I get down to the shop again to finish tonight, either way the second horse should get finished tomorrow or Tuesday. Then it's on to a bigger project.