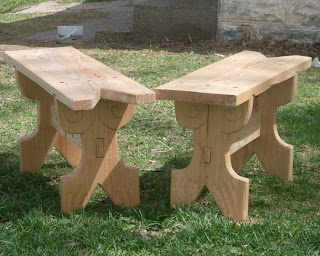 Boy oh boy am I gonna feel it in the morning. I can tell already. I didn't have a chance to do much today, I only ripped two 2x8's in half. I know I'm not in great shape. Ripping these two boards was a real workout for me and I haven't decided if it's a good thing or a bad thing and if I really should do it more often. I guess I probably should. Man it had me huffing and puffing and sweating up a storm for a while. 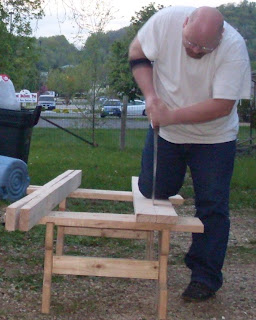 So I got the saw benches finished. But the point of them is that they are a stepping stone, A necessary evil on the way to building a joinery bench by hand. Have you heard about the Joinery Bench?  Until this last February I hadn't either.

Early February I had just began the concept of getting myself up and running to do hand tool wood working demonstrations at Medieval and Renaissance Faires (you can read more about it in my previous posts starting here) I was thinking real hard about what kind of bench I could make that would be able to take knock down and pack up and still supply a variety of good bench qualities. Low and behold I catch a blog entry by Chris Schwarz at the Popular Woodworking site about this Joinery Bench (see the entry here) It was designed and built by Tim Williams, who you can find at the Wood Therapy Blog and more specifically his blog about benches especially the construction of this one at Bench Vice. Well it was like the light shone in from heaven and all the light bulbs in my thoughts went solar. 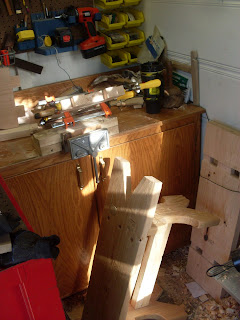 I know I feel a little crazy about the whole thing. Considering I had recently finished building a full size workbench that was the impetus of this very blog. But this was more than one thing for me. Here was a bench that I could build to knock down, it was small enough to be reasonable to transport, and seemed flexible enough to handle all the jobs I needed it to do while performing demos. It also offered something to use in the shop. Both in my current shop, where I am basically working off a cabinet. I would love to replace it with a smaller size workbench with a real vise. (oh to dream a dream) and as I eventually upgrade back to a real sized shop a joinery bench offers some flexibility and options that are different from my current workbench, (woefully stuck in storage for now) so my bench for demo's does not have to be something that rests in the corner, waiting to be hauled out a half a dozen times a year. It can actually work and earn its living year round. I really like that. 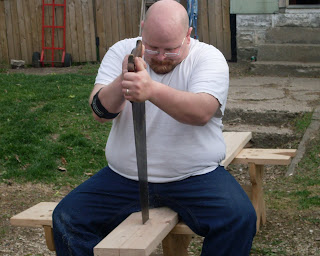 So the Joinery bench started tonight with beginning to rip these 2x8's down to make the laminated pieces for the top. Four of them to rip . . . two down and two to go.