A while back I was struck by a bolt of inspirational lightning. Not that this is a completely unusual experience, I have these episodes more and more the longer I am involved with the online woodworking communities out here on the internet. From reading fellow woodwrights blogs, to the light banter and near instant access to people smarter than me on Twitter. There is a lot to be said about the daily help and information I get to consume thanks to this medium. Sometimes it's a tsunami of info and I think I'll drown, but when that happens, ahhh what a sweet death.

This particular bolt of inspiration came from Christopher Schwarz's blog over at Popular Woodworking. Sometimes when you read things they make so much sense you wonder why it never occurred to you, see that's the thing I was saying about reading and connecting with a bunch of people smarter than me. He had done some research and thinking based on the images from engraver's plates in Joseph Moxon's "Mechanick Exercises" published in 1703 and the curious picture of a workbench with a twin screw vise that doesn't seem to make perfect sense with the rest of the picture. 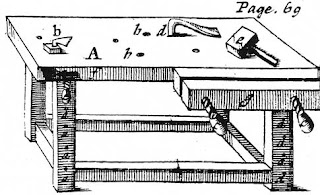 You can read the rest of Chris's blog on the subject and background by clicking HERE, but the end result was he decided to build a twin screw vise that clamped to the top of the workbench instead of being intricately attached to it. This is where the aforementioned lightning struck. I have always wanted and envied a twin screw vise and when I built my version of the Joiner's Bench my first intentions were to mount one on the front of that. Then I saw this info from Chris and I had to make one this way instead, and I had just enough hickory left over from wrapping to Joiner's Bench to pull it off. 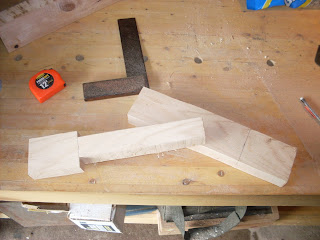 I started by turning the two screws needed. I did write about the first one I turned (click HERE if you missed that one and want to read more about the turning and threading process) and the first one I managed to do perfectly, The second one works, but I almost, almost made the diameter on the threaded area too small, and if they weren't so long, I'd have had to make another, but it worked. I just cannot stress enough how important it is to take your time and be careful if your are turning your own, was I a little cocky from my success on the first one, maybe a little. The screws are made from 1 1/2" by 3 1/2:" by 15" hickory stock, after cutting the area to turn round from the center I took the strips left after the cut, cut and glued them back to the handle end. After the glue dried I put them back on the lathe and turned down the handles. I left the handles a little bulky just in case I decide to put a cross dowel through them to help turn them faster. 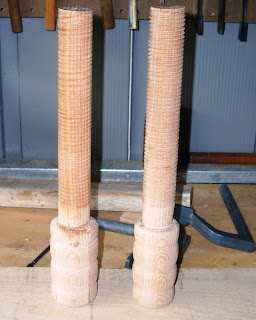 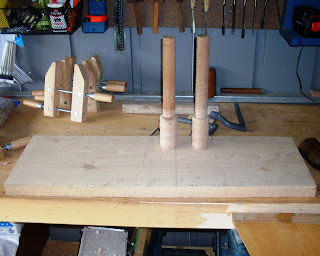 Now to make the faces of the vise. I had one big section of hickory left for this, 11" wide 1 1/2: thick and just a hair under 36" long, I decided to make two halves that lined up together perfect instead of the offset bottom that Chris designed. Why? Well I could give you a line about his design and how it may or may not line up with what's depicted in the plates in Moxon or how I've seen pics on Peter Follansbee's blog using a smaller version of this vise as a free floating third hand when chiseling on his bench, but in all honesty I only had this much hickory left and I wanted to give the vise as much face surface as possible. I like Chris's design because it makes it easier to line up to the front of the bench when placing the vise, but it's really no that hard to line it up anyhow. 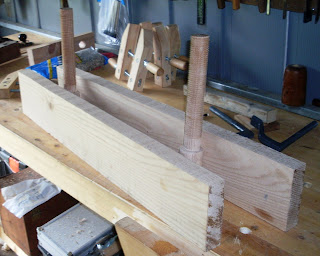 I ripped the board in half using my bandsaw to get a very thin kerf. I then brought the halves over to the bench and played with the two halves to see which way they would mate together best. After marking the boards to the outside and top and bottom, I ganged them together in the leg vise and planed them down to matching size. This board was still pretty rough from the mill, especially on the sides. I took the boards down to even with a jack plane and then trued them out with my fore plane, (I just don't own a good metal bodied joiner plane yet, and the wooden one I own still needs a lot of tuning and "I'll get around to it" work, the fore plane was long enough to true 3 feet of board) When one side was done I flipped the stack, made sure they were both lined up perfectly, and flattened and trued the other side.


The board had only one pass through the surface planer at the mill, so it was still pretty rough, just a minute or two with the smoothing plane cured all of those ills. I also gave all the edges a slight round over, not much, just a touch. 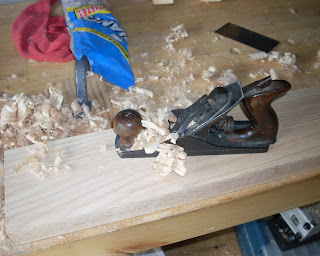 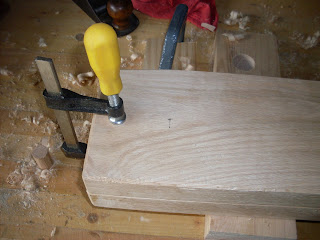 Now it was time to drill holes. I carefully ganged the boards together again, making sure that matching surfaces were the way I wanted and I clamped them together. I had to drill 2 different size holes with forstner bits to make this work 1 1/2" in the board facing me as the vise worked and 1 3/8" holes in the board that took the threads. 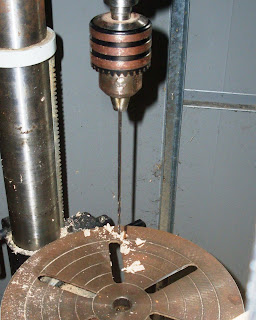 Now I could have measured exactly and made marks and swore when I was off by a 32nd of an inch, or I could do just what I did and cut out most of the measuring all together. With the boards ganged I did measure on each end, 3 " in from the outside and halfway across the width and made a small mark where these points met. I then went over to the drill press where I  took a very long, but small diameter drill bit and I drilled at that mark through both boards. Now I had a small pilot hole that would line up perfectly between the two boards. I took them apart, chucked up the forstner bits and bored out the appropriate holes.

I do have to explain one thing here that I had to really think about on my own, because maybe other places I've read thought this was intuitive or I missed it, but when boring the holes why two different sizes? You are only threading into one board. if you cut threads into both boards the threads will keep those boards in opposition to one another, so one board gets the threads and the other gets a hole slightly larger so the screws will push right through it and essentially it floats in place until the threads draw the bigger handles tight and draw the boards together. then you get the force of a vise. Like I said maybe intuitive but I like things explained. 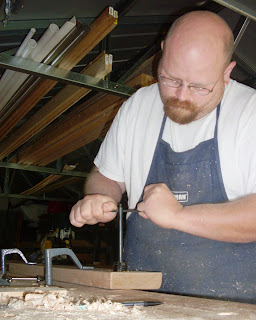 I then took them over to the bench and cut the threads into the 1 3/8th holes. I lined up the boards together, connected the back board to the bench with a couple of F clamps, grabbed a piece of poplar and gave the vise a try. It worked great, rock solid as advertised.


I have a little left to do, I want to devise a way to hold it in place with my holdfasts instead of F clamps, My holdfasts are much too short to work, plus what I have in mind may add a little stability as well. (not that it needs it) I'm going to throw some danish oil on it to protect it and make it look prettier, and maybe wax the threads a little. Other than that the vise is usable and workable, and I'm very happy with it. Thank you again Mr. Schwarz for the great idea. 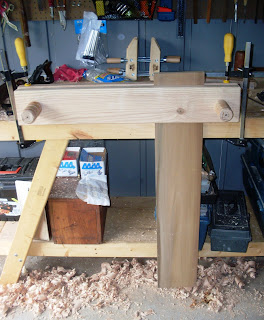 Getting struck with inspirational lightning is a funny thing, If you keep the circuit going and don't let it go to ground, you can pass on the ideas and inspiration along a whole spectrum. I hope this was able to pass along my link in the circuit and maybe strike someone else with a little jolt of inspiration.