As some of you know, my current shop is set up in a small 5 foot by 9 foot area that shares space with our door to the outside and the stair well up to our half of the duplex. I have called it the Wood Shop Jr. since the get go and it's constraints has lead to several changes to my standard and customary methods of work. Some have been good changes, like forcing me to focus on hand tools and their techniques and learning a lot there. Others have been more frustrating and detrimental.

I run a shop like I read books. My wife makes fun of me because I never read just one book at a time I read anywhere from three to eight at a time, they are scattered about in different places. I have one or two in the bedroom, one in the living room, one in the bathroom, one in the car, one in the bag I take to work with me. I have always surrounded myself with books, and yes I can keep them all straight and remember what's happening in each when I pick them up. I guess that is just how I tick. In the workshop I follow similar habits, not to the extent of my book fetish, but I almost never have just one project going on. Typically I will have two or three in the works at the same time, all at varying stages. I keep separate notes and plans on each and that helps keep me on track, but it keeps my momentum going. While I'm waiting for a glue up to dry on one project, I can be breaking down stock for the next, or placing another coat of finish on whats almost done. This way inertia doesn't stop, I just roll from workpiece to workpiece.

I absolutely do not have the room for that in the Wood Shop Jr. I have to work on one thing at a time. I'm either set up for sharpening, or I'm not. I'm either set up for dovetailing, or I'm not. You get the idea. So I face something that I haven't really ever had to deal with much in the past. A kind of project hangover. After finishing the Joinery Bench, my mind, at least my rational mind, wanted to jump into work on another project, apparently the rest of me just wanted to recover, get some extra sleep and put my feet up for most of the week. I had lost inertia. My rational mind was desperate by yesterday, how can I get the momentum back?

I decided that what I needed to do was take a little time this weekend and not worry about the projects with the deadlines, but just focus on something simple to kick start the drive again. I needed to spend some time getting reacquainted with some old friends and get to meet a new one. As you may have read, we are moving the family into an apartment building soon, a nice big 3 bedroom apartment not the little 2 bedroom duplex upstairs we are in now, but there will be no space for a shop, no garage, no basement, no cubby hole at the bottom of the stairs. So my father has offered to me the use of his outdoor shed as he's going to move the shop he was using it for to the basement of their house. The plus, I get more room, room enough to set up all the bigger tools I used to use a lot. The minus, I'm setting up shop . . .  again.


Anyway I went and worked up a little sweat there this morning, and I started by reassembling an old friend. My hybrid workbench combining Chris Schwarz's 175 Dollar Workbench and his take on the English or Nicholson Workbench. If I was a better man, like some bloggers out there, I would have a name for her, but I think I like her just the way she is, I suppose for all the times I said "come on baby," today Baby might as well be her name. 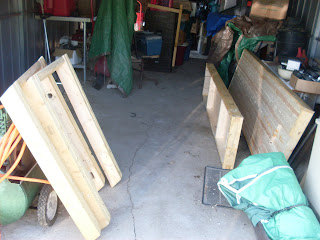 Here she is starting out in pieces, You can see other old friends waiting in the background behind some tarps, waiting for their turn to be rediscovered 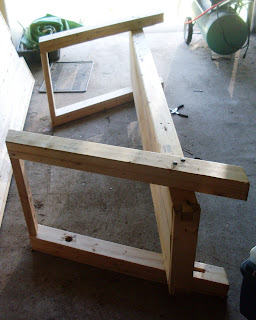 The first thing to do was to get her legs under her again. I was kind of a moron and never marked which leg went to which side when I took her apart for the move home from Maine so it took some real thinking and remembering to get it right, but I got it and from there it was just hammering the carriage bolts home through the holes and tightening the washer and nut to the inside 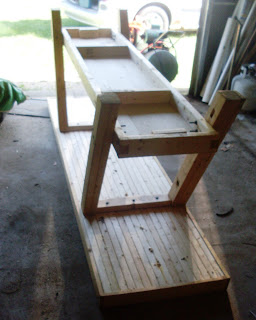 Then I wrestled down the benchtop, and put in the lag screws that make the love connection between the two. It was also easier to get the final torque on the carriage bolt nuts from this upside down position. The only bear was flipping her over. I was working alone of course, so I used a flat pry bar to kick up the edge enough to get a finger hold and then I turned her heavy butt over. Foolish, maybe, but it turned out OK and I always say that it's amazing what you can accomplish when no one is looking. 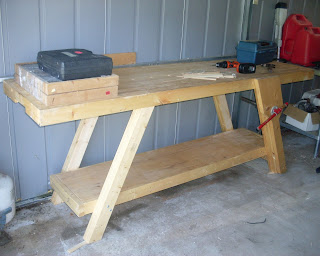 Isn't it amazing how fast a benchtop can fill up. I swear I had her sitting in place for thirty seconds and I moved to set something on top of her. Either was her sexy leg vise was attached, though I have a little fine tuning to do with a plane where the face leg and the vise meet, but I think some problems like that were to be expected. Nothing taken apart goes back together again perfectly. 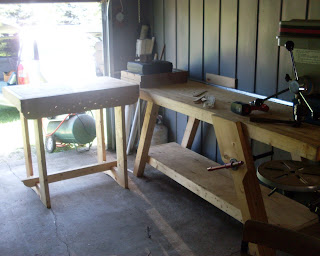 Not a great picture, but here we have an old friend meeting a new friend. The Nicholson bench meets the new kid on the block the Joinery Bench. I think they're getting along fine. And speaking of new friends, I had to pack it in and hear to the real life job that afternoon, but I was able to tee up getting ready to open up and get to know a new friend before I cut out for the day.
Hopefully there will be some new stories tomorrow. Recently my home PC died for good, After all the software issues and rebooting the sucker from scratch, the power source died, second time in less than a year, I'm not gonna replace it again and it will be a while before I can replace the whole computer. No matter, I pledge to continue to work hard to update my blog here on a regular basis, beg, borrow, or steal.
But for tonight that's it.
Cheers
Oldwolf
Email Post
Labels: Nicholson Workbench Workshop