When I see a piece of furniture, it's the joinery I'm drawn to.

I love to cut joinery, I should add to that. I love to cut joinery by hand. For me there is just no better way to spend a day in the shop because I find it to be one of the most satisfying processes in woodworking. I understand some people find fulfillment in finishing and some just find it in the end product, some probably even find it in the initial milling boards to size, I've never heard anyone say they enjoy glue-ups or assembly but I'm sure there's someone who loves that as well. (glue up time seems to be my most irritable time) 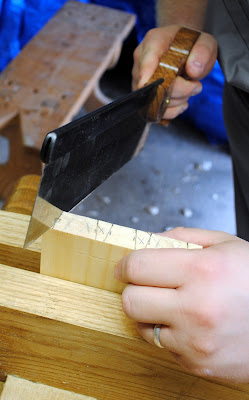 Here's the problem, I think that all of us a workers of wood can appreciate well executed joinery as a mark of craftsmanship and sometimes refinement. On some level, non-woodworkers can appreciate those things too. But often joinery is just not enough to supply the drama good pieces need. Projects need an element that draws people to look at them, to pick them out of a room or a picture. Something to draw the eyes of woodworkers and non-woodworkers alike. Whether its complex drama like carving, inlay or marquetry or simpler drama like a tapered leg, a simple turning, or an eye catching moulding, there needs to be some aspect that will tell a story. 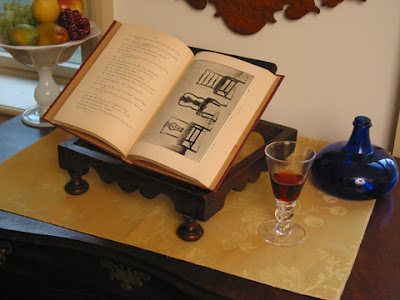 Lately I've been writing about my building a version of Chuck Bender's William and Mary bookstand. When I saw it in Popular Woodworking Magazine I knew I was going to have to build one for several reasons. One reason was that even though it was a smaller piece, there is a ton of joinery going on in this baby. Another reason was I fell in love with the subtle drama of it. The combination of small turned feet and scalloped relief cuts makes this piece sing out a story most everyone wants to hear.

The turning comes later, for now lets start with the scalloped relief cuts or cyma curves. 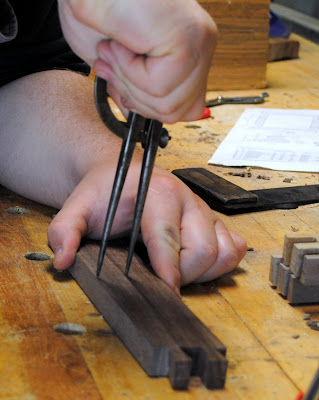 No templates were harmed in the creation of these relief cuts. Instead I carried out a simple layout using a pair of dividers to scratch in the eventual saw cuts. I used a marking gauge to define a line down the middle of the piece. Then I set the dividers to the depth of that mark and from the center of the board, scratched in the center curve.

Without changing the divider's setting I took three steps down the center line, I placed my post pin on the outer edge of the board and scratched a matching curve, but in the opposite profile. I repeated that until I had three semi circles total, one in the center and two on either end. 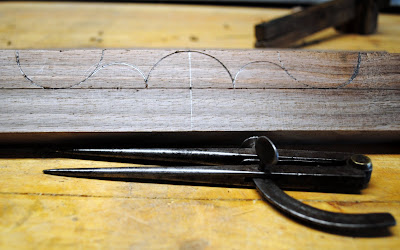 Then I took a different pair of dividers and set them to around 2/3rds the width of the first setting. I did not measure, I used my eyes. I then played with the distance to find the "sweet spot" that would connect the end of the center's circle with the sweep of the outer circle and I scratched that in place. I darkened all the scratch lines with a pencil and shaded the areas to remove. 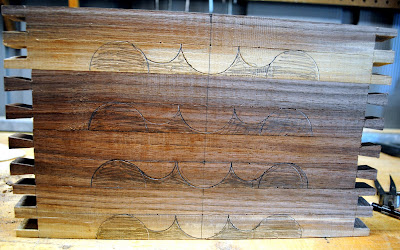 Now I was ready to begin to cut them out. I had meant to cut these out on the bandsaw, but for whatever reason the wood gods were not on my side while I tried to change out to a thin 1/8" blade. After an hour of setting, tensioning, and swearing, I gave up and decided I would have to resort to the coping saw. Not really a defeat, I like to work with the coping saw too, so closer to changing gears. 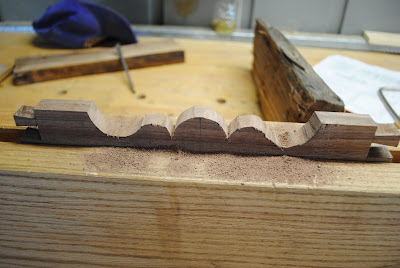 I dug out my Moxon Vice, set it up, clamped in the first piece of stock, and went to work. First I sawed out as much of the waste as possible. 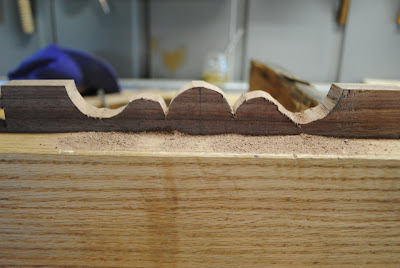 Then I set about cleaning up the lines and making them as crisp as possible. To accomplish this I moved back and forth between a couple rasps, a couple chisels and even some paring with a relaxed sweep carving gouge. 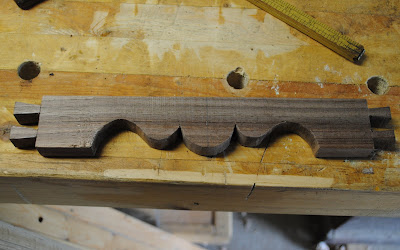 This method of ding it by hand does not create carbon copies on each of the four pieces, but the truth is you will never see them stacked in profile like this. 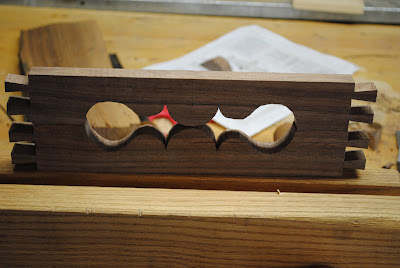 Instead they will be spread out around the four sides of the frame, and even though they are not perfect copies, unless someone breaks out a ruler and goes to town measuring them, no one will ever be the wiser. So if you are the type that gets hung up on these things, my advice is that you gotta relax a bit man. In the end if it looks right, it is right.