In every build, in every piece of a build, there are a hundred little decisions you have to make. The pressure is on to make good decisions at every bend because if you don't the overall work can suffer. Good decisions are an essential part of good woodworking but how do you tell a good decision from a not so good one?

I cringe a little when I look at the woodworking book section of my local Barnes and Nobles because a third of the books there refer to woodworking "done easy" and that's a shame because being good at woodworking is hard. It takes a lot of time and dedication.

After reading that you might think I have something against beginning woodworkers, and you'd be wrong. I remember starting myself and all the poor decisions I made. (buy me a beer and ask me about the pencil post bed debacle) But what's missing for many of those would be apprentices is some perspective. The idea that learning is a linear process, that you have to build one mastered skill set on top another, that knowing how to build a picnic table from 2x4's does not translate into being able to build a highboy. You can pull off a highboy shaped object, but not a real highboy. Not one done well and done right with all the right decisions made at the right times. There has to be more in between the two, and I think our modern society doesn't understand that.
Without anyone to tell me, it took half a dozen years of making sawdust before I realized that though I had made stuff from wood, I was not a woodworker, I was closer to a child who has made mounds of sand on the beach and then imagines they are magnificent castles.Once I realized that, I knew I had a long way to go, but I still wanted to make the journey. Hell, I needed to make the journey, and I am still on that journey. Here on this blog I get to record the steps of my journey, and if I go back and read where I've been, I'm proud of how much I've grown.

The thing that nobody says in those books for beginners is that anything worth doing well takes time and dedication. In our world of instant gratification that's a tough horse to sell. You've gotta put in the hours, so when you make one of those hundreds of decisions, you have the experience to know what will "most likely" work well, so your piece will "most likely" turn out satisfactory.

I say "most likely" because the interesting thing about woodworking is that there are no guarantees, no matter how much experience you have, each piece is a journey.

I started writing about decisions because as I work on my version of the William and Mary book stand that Chuck Bender wrote about in the November issue of Popular Woodworking, I have my own set of decisions to make. In the original piece, and on Chuck's version, the corners of the frame were joined with one single stout dovetail. As I built my failed attempt earlier this year, I used that single tail without thinking about it. When it was time for this rematch I decided that one of the mistakes made was letting the cut list and measured drawing I had from HERE make decisions for me.

I have never been good at follow the leader. Things work better when I use pieces as inspiration rather than a strict blueprint. (One reason I am a better woodworker than I am a carpenter) I don't even follow the exact recipe when I make Mac 'n' Cheese from a box. Me being me, I have to make my own decisions and then I can stand or fall on them, and I can deal with that.

It took a while to decide to bypass the single dovetail. I cut some test joints and I looked at them from different perspectives. I actually kind of agonized over the decision divert from the original, but in the end I decided on a pair of tails over the single. 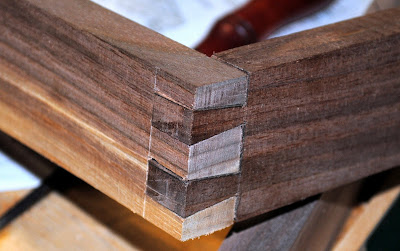 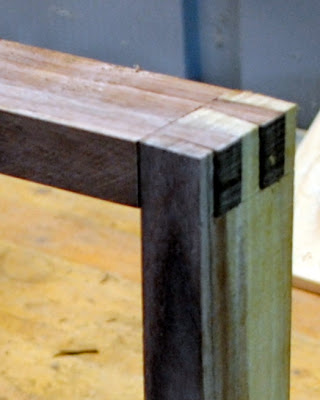 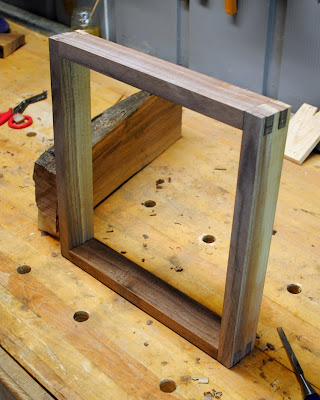 After I finished cutting all the corners I dug out the failed attempt from the back corner of the shop to get a look at both of them. 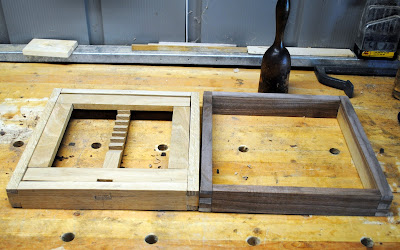 The twin tails just feel better to me, and as far as the look of my work, no contest. I almost didn't put up this picture because of the gaping in the oak attempt. I've done a lot of dovetail cutting this season and practice makes perfect but I believe another big factor is my purchase of an incredible quality dovetail saw from Mark Harrell over at Bad Axe Tool Works. A quality too can make the difference, another lesson I've been learning. The sticky question is, has the saw made dovetail cutting easier and there fore I get better results, or is dovetail cutting just that much more enjoyable so I tend to cut them more and the practice equals better results?

How many licks does it take to get to the center of a tootsie pop? The world may never know. 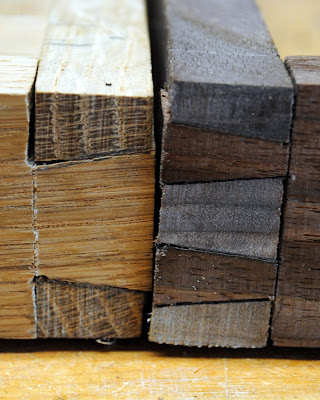 In the end, did I make a good decision? That's not a question I can answer yet. The important thing is I made a decision and that there are lessons to be learned from each decision.