Recently I've been building shop made wooden squares. I was inspired to start by the English Layout Square featured in a recent Popular Woodworking magazine article. After some discussion with other woodworkers I was further inspired to drill a hole in the square's apex and hang a string with a plumb bob from it. Making what I have been calling an A-frame square 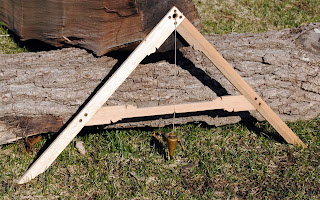 You can read all about this square and the build by clicking HERE.

After I posted two things happened,

1) I had a well deserved question about the use of this tool, I think that I had difficulty communicating some things about it, mostly because I don't think I had a good grasp on the multiple complexities that can come from such an ancient tool.

2) A little bit of my pride reared it's head and I felt compelled to shoot an email of to Chris Schwarz to show off a bit, He wrote back and told me that the actual name of the tool I had made was called a Libella.

In the comments I was gracefully rescued from my own ignorance by this: 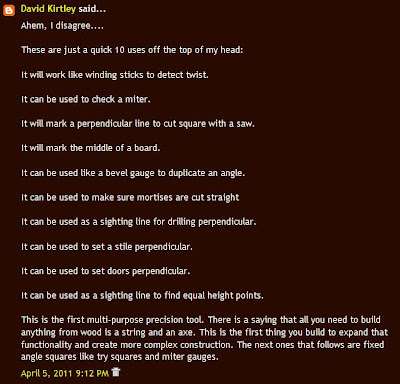 I tried to do a little research on the internet about further uses for the Libella or the A-frame square and I came up with very little to show for it. So in place of research I took to the shop to put in some hands on fooling around starting with the list supplied by David.

After a couple hours I decided to shoot a quick video on some of the things I had figured out that afternoon. So even though I don't go to moving picture too often, here is a quick shot on exploring the Libella.