There is something about my shop that I hate. It's red and boxy and it's up on four wheels, and don't get me wrong, it works, but I hate it. 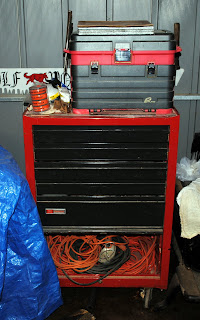 It started simple enough a while back, I had just a few planes in my possession and no real idea how to use them. They fit well in the drawer and it kept them safe and out of my way. As my interest and knowledge picked up I began to add some more planes to the shop. It seemed natural that I would just put the new planes in the drawers with the others. And so on, and so on, until we arrive at today. 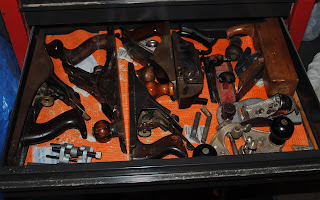 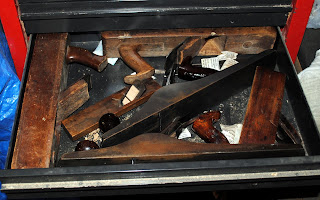 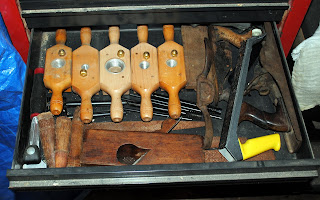 Hell, the Sears cart doesn't even fit all my planes, my wooden joiner and my #45 (not yet cleaned and rehabbed) often live on or under the workbench. 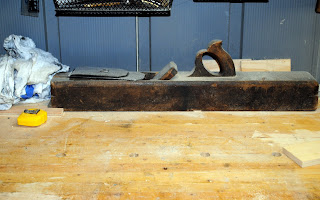 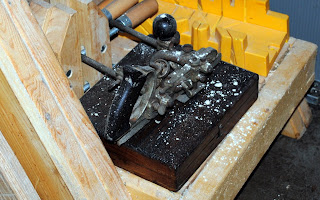 I've wanted to build a piece of shop furniture to house my hand planes for a while, I look on the net and in blogs at pictures from other folks shops, at the variety of cabinets, shelves and ramps that looked a lot like THIS. There were two common things I saw, and liked. The first and maybe the most prominent was some type of ramp or slot to hold metal bodied planes. There was often a lipped and sliding insert to lock the planes in place and keep them from meeting their demise on the concrete shop floor. I like this set up mostly for looks, I have seen some folks build one where the planes seem very difficult to get at. Those I had no interest in at all, I use my hand planes, a lot.

I ended up with a few issues with this design. One that I kept coming back to is these locked designs seemed to all hold collections of planes from one maker, Stanley's or Lie Nielsen's. My metal body hand planes are from everywhere, Stanely, Miller Falls, Sargent, and others. Two, is that there was no account in this design for those odd shaped planes, my Rabbet plane, Router Plane, or others. Third, the system just seemed to rigid and specialized for each tool. I just wanted more flexibility.

Now I like my metal bodied planes, but the longer I work, the more enamored I am of my wooden planes, and though I could build a ramp style rack that would house those planes, I finally decided on a more standard and straightforward method to get my planes out of the damned Sears cart. A straight up shelved wall cabinet. I am building it as the mate of my Saw Till design and it will hang on the wall next to it.It should be a fairly simple build, and I will be covering my progress through the next several posts. 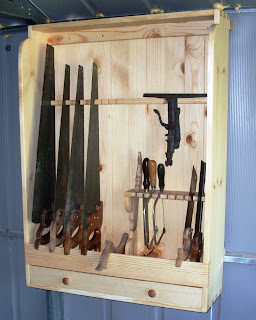 I picked up several pine 1 x 10's the other day and I started out by cutting them to length, flattening out most of the twist on one and generally scrubbing the BORG off them. 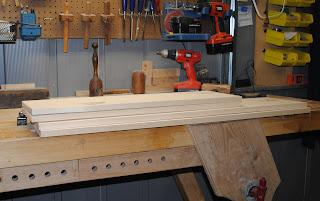 I then took to marking how the boards would layout in the piece, paying attention to grain flow and the position of the knots, I also marked each to what faced inside and the orientation of top, bottom, and back side, where the rabbet lives. 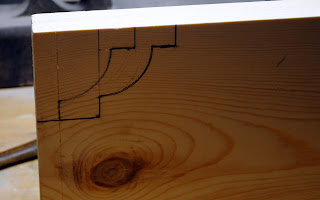 I cut a nice round over profile into the top sides of the Saw Till, and I wanted to do something similar here, yet not the same, more of a counterpoint to the round over. So with the help of a pair of dividers I drew out a cove shape. You can see by the picture I drew it on twice. After I penciled in my scratch lines for the first, shallower version, I stood back to take a look and it looked small and diminutive. After taking a closer look at the round over on the Saw Till I realized what I had missed. The round over starts with a 2" drop from the top. 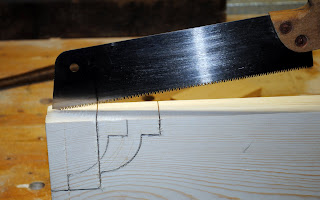 I went back to the board and laid out the cove again. After penciling in my scratch lines again and standing back to look, I was happier. I ganged both sides together with some pinch clamps, rocked it into the leg vise, and started by dropping two straight cuts down. 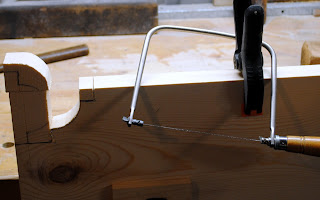 I then cut out the curved part of the cove with a coping saw. I never worry about being right on my line when I'm using this style of saw. I just try to cut as close as possible and keep the blade perpendicular. 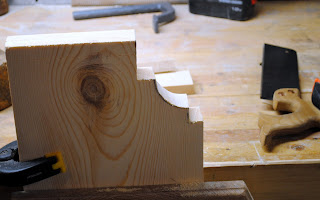 I then turned the piece in the leg vice to sit more straight up and down and made the two other straight cuts. 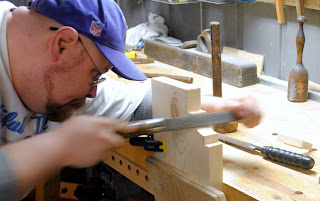 Then comes the real fun, I think it's amazing how many people overlook the usefulness of a wood rasp, I think until recently it may have been one of the most over looked, least spoken about ugly step children of the shop. I have always loved them. Of course the King-Maker, Chris Schwarz changed that game recently when he claimed they could give woodworkers superpowers. I believe that changed much of the dynamic and people may just stretch out to realize how versatile these tools can be. 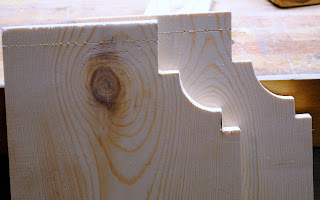 I did have a late start in the shop this time and so I had to give a stop after the detail was cut. But I was very happy with the proportions and how it looks.