I Couldn't Build Just One. 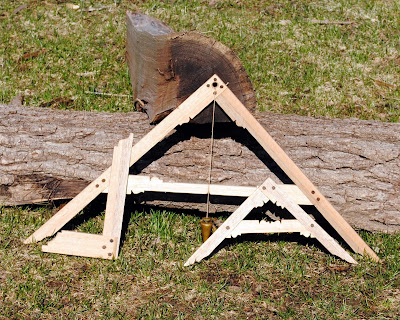 Well I hope that I didn't deceive any readers out there as I have been blogging along about building my version of the English Layout Square. I did not spend all my time working on one and only one square, In fact I finished three separate squares all about the same time. One was the larger layout square and Libella that you have seen in recent posts (If you're just catching up you can catch all the posts HERE) 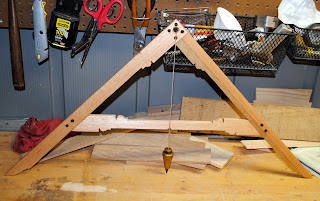 Before I even cut any of the joinery on this one I decided that, while it was great for big markups, it would be nice to have a smaller one as well. So I built a Jr, English Layout Square. 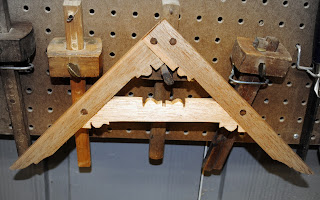 I decided that a good place to start would be to cut the length of the pieces in half and see where that gets me. Since the large layout square had 21" lengths, I cut the Jr. square with 10 1/2" lengths. 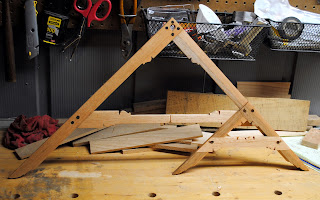 I followed the same exact process I had on the large square all the way through, in the end forgoing the hole for the plumb bob string and using less of the mystery exotic pins. Because the square was smaller I also pared down the width of the stock I used to closer to 1 1/8" at the thickest. of course it tapers down to around 7/8" for most of the length of the arms.

Of course since I had the twitter discussion about whether this square was a Roubo (French) or English derivation, (if you missed it I was wrong, but I'm actually pretty glad I was wrong) I decided I had better build a version of what usually gets called a "Roubo Square." 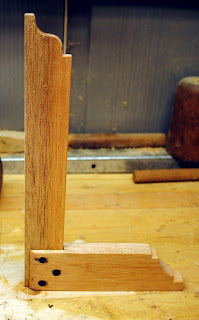 The same mahogany board and some of the same exotic pegs and I had a square closer to the try squares I use most often. It was a nice change up in the build because the joinery was a little different. 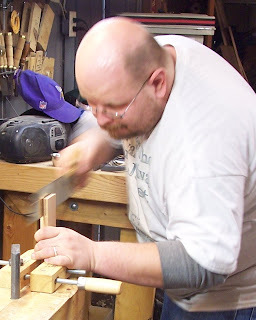 Necessity is the mother of invention, or so they say. One of the issues I have found with my workbench is that cutting tenons or something similar just isn't comfortable, especially if I'm trying to use the leg vise. I have a tail vise on the left end of the bench that works but honestly it's not as comfortable or convenient to use as it used to seem to be. I must be evolving, hopefully for the better. (Cue visions of a three eyed fish dragging its scaly carcass from the ocean to take the first breath of air into its psudo-lungs) Recently I have taken to securing the board in a wooden clamp and then securing the clamp with a hold fast. It actually works pretty well, I'm not sure what I'll do when I have something longer than the bench is tall, but I'll burn that bridge when I come to it. 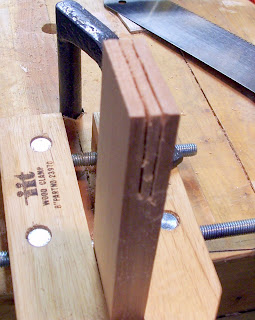 Before sawing these lines were first scribed with a marking gauge. Marking this out and setting it up is similar to a tenon, only in the end you are removing a different section of waste. Sawing is very similar to hand cutting your dovetails, use good technique in holding and moving your saw, and split that line. 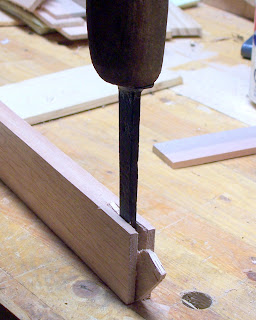 I then split the waste from the square's handle using a mortising chisel. First knocking out half of the waste, then half of what remained, then half again and so on until I had worked back to the marking gauge line. 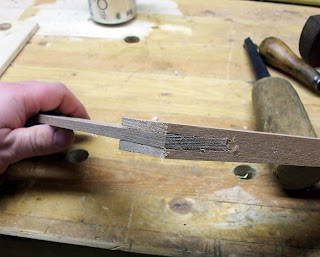 A little dry fit. After I got a look at it I realized I had forgotten to set myself up to allow the blade of the square to sit about 1/4" proud of the handle on the marking side. Another quick mark off with a marking gauge and a couple quick crosscuts and that mistake was remedied. 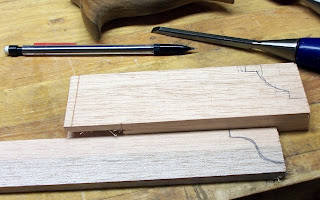 Now cutting the ogee details into both the handle and blade. Oh wait you can see the lines too remove that 1/4" off the handle too. I think what gets me about the design details of this style of square is how the blade and the handle both get different detail cut outs, but both complement each other so very well until I studied it close in the planing of the build, I hadn't consciously noticed the difference.

I squared up the Roubo using the same techniques I used for the other two squares. The truth is though this one seemed less fussy to accomplish. Not that the other two were bad, maybe it has more to do with this one being the third square I'd trued in a couple of days. 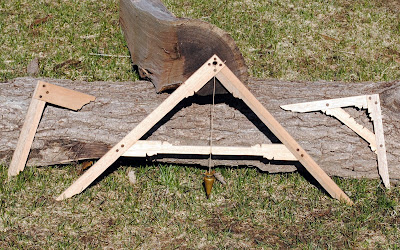 In the end building these three squares was a blast, I still might build a couple different sizes of the Roubo, but from here out they'll be filler projects, something to do while the glue or finish dries on my main build. If you have read my thoughts here much before you know that I feel that tools should have that "It" factor. They have to look good classically, be comfortable to use, and be reliable in their use. All these things together not only work to help you build something, but also act as inspiration while they're working.

P.S. Does this picture make anyone else want to don a black cape and mask with pointy ears and say things like "Look Robin, Commissioner Gordon has turned on the Bat-Signal...Gotham needs us. To the Bat-Mobile!" 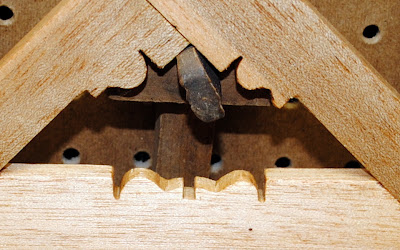 I hope I'm not the only one! From here on out I will probably take to calling this The Bat-Square :)
- D
Email Post
Labels: Shop Built Squares Tools