A Touch Of Krenov

I have been reading some of James Krenov's writing lately, in particular it's been "The Impractical Cabinetmaker" He is inspiring in his work and his outlook on what he is doing, a real philosophy of woodworking, I understand why people enjoy and have followed him and his work for so long, I'll admit I am late to the party here, but I am beginning to learn the dance steps.

However, I find I cannot just sit down and read his stuff cover to cover, page after page. He is a bit too wandering for me to do that, but if I take him in smaller snippets and then give my brain time to digest what I've read, I find his words poignant. It's a bit like reading poetry, you have to dwell on it sometimes to figure out the facets of the verse, like turning a rubix cube.

I blame my decision today on Krenov and reading the parts where he talks about finding some of those unique pieces of wood and waiting for the right chances to showcase them. Tonight I was at the local home center and I was sorting through the pile of mid-quality 1x10's to build another shop project, (Of course to be revealed later) I planned to pick up four boards, I came back to the shop with six pine boards instead, because two of them looked like this. 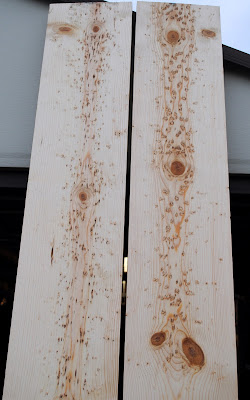 I actually looked at the board on the right for a while and then shuffled it over into the "Not" pile, a little bit later when I found a second similar board I stood it up and I looked at it. Eventually I could feel the creep of a decision being made and next thing I knew I had these two unique beauties sitting in the cart. I can see possibilities in them, I just have to make sure I exploit them in the right way. I'm not sure what's going on whether it was a little fungus or some spalting or what caused it, but it's deeper than just the surface and I think it's cool as hell. Maybe I'll complete the Krenov circle and make a version of the cabinet on a stand with them. It seems like that's what they're screaming for and I've always wanted an excuse to make one. 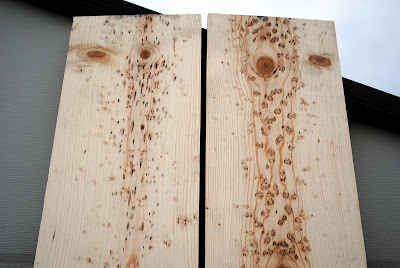 Oh yes, and for those of you out there wondering what the project I'm starting with the four pine 1x10's is, I will give you a little hint. It involves every single one of these guys. 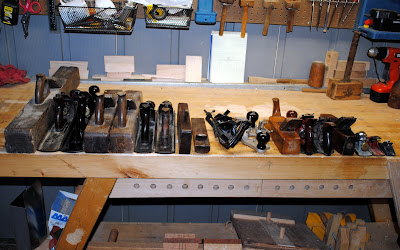