I was just beginning to stick my toe into the ocean that can be the online woodworking community. I had found some forums, I had started to write this blog, and by consequence, I had started to get a look at other woodworking blogs out there. One of the first and best I have ever found was Joiner's Notes by Peter Follansbee.

For me, a woodworker with a deep interest in history and by combining default historical woodworking, Peter's blog is the perfect storm of interest and content for me, his writing is straightforward yet scholarly. He is so well versed and studied, truly an expert and master with a soft spoken delivery. If you don't know his blog or his work I suggest you go and check them out.

The most obvious thing that sets Peter's work apart from other guys out there is the carving that covers every one of his pieces. I also harbor an interest in decorative carving, I've added it to a lot of trunks and other things I've built, usually Celtic Knot-work designs. I started carving using a rotary tool and burr, and I always wanted to work with the real deal carving tools but I had no idea how to work or how to start. Peter's blog was a great first instruction on the basic tools and how to use them. 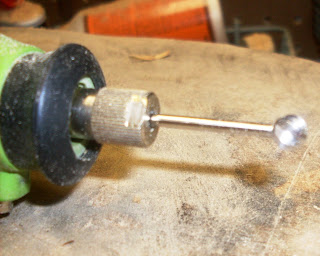 At first glance his reproduction carving work looks like some insanely complicated patterns, something I believed would be beyond me, but then I started to catch some videos out there on Peter and his technique. Like THIS one posted on You Tube by The Village Carpenter, but even better is his appearance on The Woodwright's Shop where he talks about making "bible boxes" That episode you can watch online HERE. He gave me enough to get started, I picked up a couple carving chisels to get started, a "V" tool and a shallow gouge, and using some of what I learned watching him I did the carving on the front of my Medieval Hutch Chest. 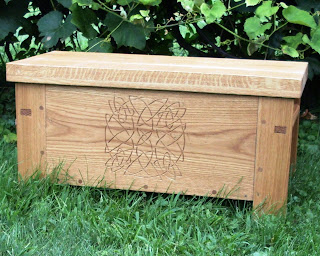 I wanted to get more in depth into learning how Peter carries out his work, then Lie-Nielsen came out with an announcement that they were producing a video featuring Peter and his carving techniques. I don't buy many woodworking videos, I just happen to prefer books, personal preference, but this was one I was gonna pick up. 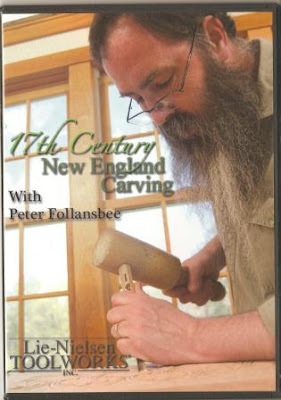 It is everything that you come to expect from Peter. Packed full of information and a detailed and thoughtful breakdown of every aspect of carving in his style. The patterns are broken down into simple steps and you are shown how to draw them out simply with a compass so you can adjust them for different width boards. In this video you are not just given a fish, as in here is two patterns you can carve if you do it this way, you are taught to fish, so you can take the lessons learned here and adapt them to other patterns and projects. I have found that since this video I look at carvings in a different way than I used to. I am not overwhelmed by the over all effect of them anymore because now I can see the different steps and stages that go into them, and in my mind I can start to break that down into a series of moves.

On the disk there are also a couple of .pdf's that can be printed out. One shows in full scale the impressions of the chisels used in the video, so even in the confusing world of carving chisel numbers and names, you can print the sheet off, take it into your friendly neighborhood woodworking store and score the same thing. There are other sheets that illustrate the starting moves for arches and a break down of the step of carving the pattern.

Here's my admission, this video is less than stimulating for people who are not interested in learning about Peter's specific techniques. My wife can only watch around 5 minutes or so before she has had enough and needs to find something else to do. I love that there is no cut away, no time elapse, there is just Peter pounding out a carving in real time, and he does make quick work of it. Honestly, the first time I tried to watch the video I was excited that it had arrived, but I had finished a long day at work and life and I wasn't completely in the right frame of mind to sit and learn. I just wanted to pop it in because it was new. In about 20 minutes Peter's smooth, soft spoken voice had me dozing off in my chair. (In his defense, I can fall asleep during an action movie if the day's been long enough, so I blame myself for this, not Mr. Follansbee)

A couple of days later I returned to the culprit chair and the DVD remote in different circumstances, this time I watched the whole thing, and I have watched it in whole and in part several times since. If you pick up this video I would think about bringing it right into the shop with you, on your laptop or portable DVD player, so you can work right alongside it. Figuring out the work while you watch it and creating some muscle memory to go along with it.

For my part I find Peter Follansbee very inspiring and motivating and this video only adds to that. I have read books on carving and there is something to them that bogs down, that gets lost in translation. Carving is an art of motion, it is one of the few things I believe translates best on video. Turning may be the the other thing that comes to mind first. If you are looking to expand your skill set and add hand carving to your repertoire then I suggest this video as a good place to start. It has convinced me that the level of work that peter does is not only accessible and achievable, but in a lot of ways (in my humble opinion) preferable to other methods of achieving such a look.

It did inspire me into one big purchase with the tax return money this year. before I owned the video I owned these two carving chisels. 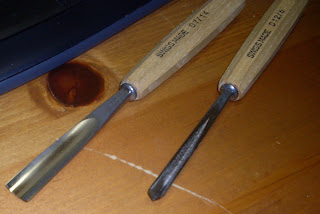 After the video I felt like I could justify a few more chisels, at an area antique mall I had been watching this set in it's case for a couple years, always surprised when I went in and found them there. Well they aren't there anymore, they're in my shop now. 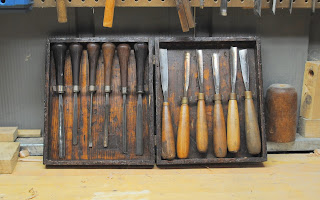 I have to clean them up a little and they all need some sharpening or honing, but I'm excited to break wood with these babies soon.

If you haven't seen it there is a preview of video Lie-Nielsen posted on You Tube. You can watch that preview HERE