Bench Design; What's In A Name?

With the help I received getting the bench top done, I had to make some decisions on what I wanted from the bench and I had to decide now. The longer the benchtop sits and waits the better chance it will warp, or fall on the floor, or be confiscated by the underwear gnomes. (It's a side business for them)


What I need the bench to do is easy. Workbench Whisperer Chris Schwarz has a list of ten rules for workbenches that lays out everything you need to know. Really, it's everything. trust me, if it's not on the list then forget it.

Want to cover the ankles of your workbench with lace so the sight of it's slender ankles doesn't unduly excite the men-folk? Your answer is on that list. . . trust me.

My issue is in all the names. There are so many names, and fads, and trends when it comes to workbenches. Sometimes it's like hearing the well off doctors at work talk about their cars.

"What kind of workbench do you use?'

"Oh, I'm into a standard Roubo now, but I may upgrade to a split top next year."

"Have you seen the specs on the Nicholson? I understand it's back in vogue again."

"Did you see Jim was still planing on a Holtzapffel. . . that's so ten years ago."

As I reflect on it, I find it a little over the top. I don't remember my grandfather's workbench having a name, It was his workbench, it did what he needed it to do or he modified it. It wasn't a near and dear thing. It was a workbench, a tool, a place to work. Sentimentality need not apply.

But there is sentimentality for an old bench. I have enjoyed the hours I've spent working at the one I'm using now, but I can do better and I've grown as a woodworker, so much since I built the first bench. I need better. As I make the decision moving forward on my new workbench, I try and take the lessons I learned from my last bench and step forward.

The only name I've truly considered is Dominy. 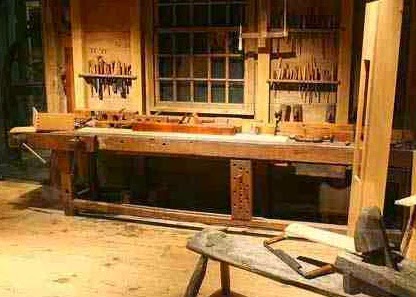 On display at Winterthur Museum is the preserved remains of the historic Dominy Brother's workshop. Included is a 12 foot long workbench. It's that correlation in length that has made me think about it.

In the end, I'm not that interested in a twin screw vise for my workholding. I have a moxon vise that does that better (hmmm another name). I like a leg vise myself but I like the sliding deadman a lot especially considering the 12 foot span. The trouble is every picture I can find of the Dominy bench is obscured by the rest of the museum and that damn tall clock case. 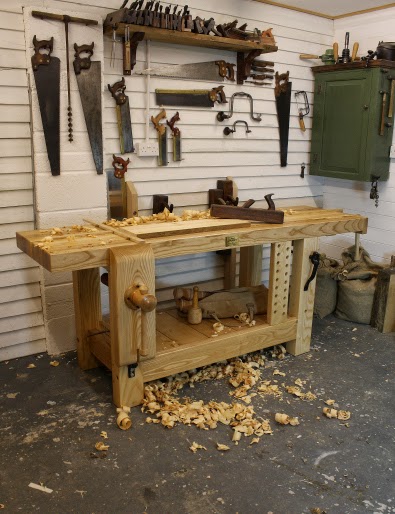 Then I saw this bench, called "The Workhorse," from Richard Maguire, a man who makes traditional workbenches for a living, and it seems like the right configurations. Mine will be a little different yet. I want a traditional saw toothed plane stop. and I'm not so sure about a tail vise. I don't have or use one now.

In the end I say, forget the name, figure out what you like and name it yourself.