Workbench 2014 Base Day One

Day one of the bench build started with a deep breath. I knew it would be a whirlwind of a build to get things done so I could get the shop back in order and return to working on the other things I have hanging over my head. Before a big day starts I like to stop for that deep breath and make sure I have my thoughts collected and a plan of attack solid in my mind. Later in the day, when I've fatigued some, and I may or may not be thinking clearly as I'm engrossed in a detail. I will be able to fall back on that mental list and check off the things accomplished and organize the next step. 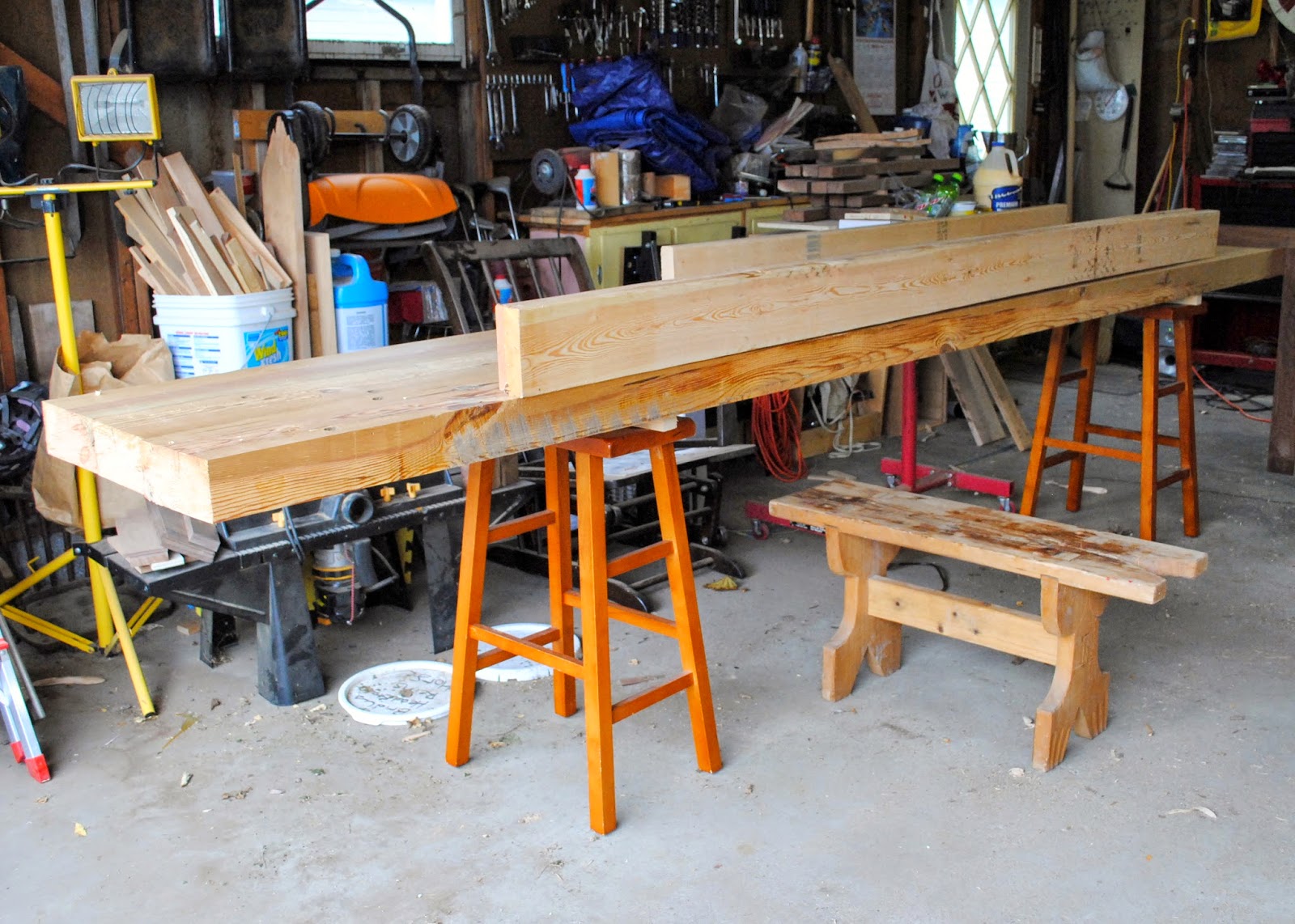 The benchtop finished out at just under 3 1/2" thick by 22" wide and 12 foot long. Alone I could lift each of the beams to move them around the shop, now joined together . . .it's all I can do to flip it over on a set of saw horses. Moving it around requires applied physics. (levers and mechanical advantage)

Those who've seen the benchtop so far have asked about the holes already in the top, woodworkers have asked why I pre-drilled my dog holes in such a way. These beams came from inside a barn and it was obvious from where they were being used, and the variety of the sizes of beams around them, they had been recycled before, probably from another even older barn.

The barn I got them from was around 80 years old, I wonder how long the previous barn stood and how long it's been since these Fir beams were standing trees. 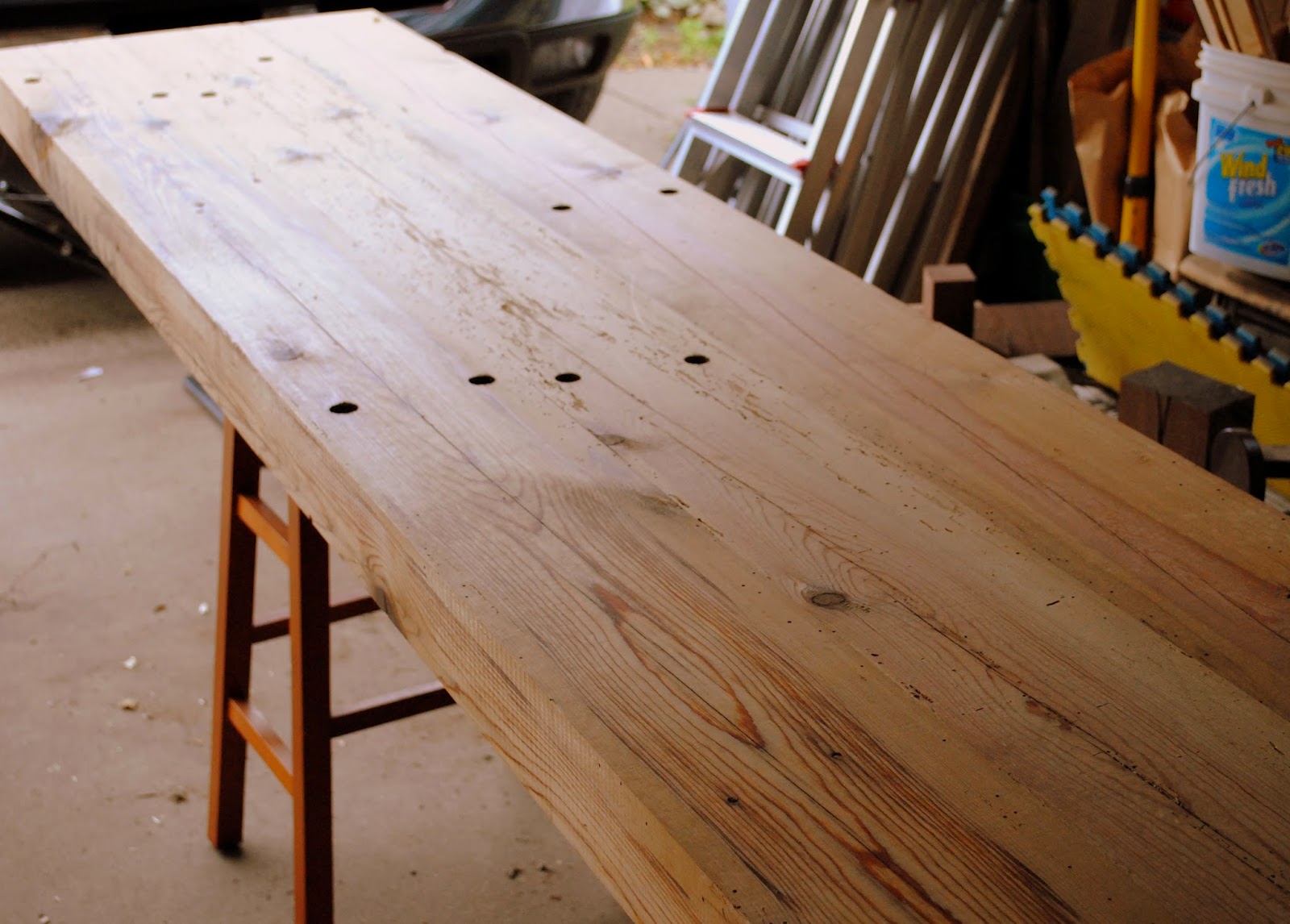 The holes in the beams must have been related to the joinery of the first barn. You can see evidence of the joinery in the larger leg beam as well. Big mortises 2" by 10" in size with a hole for a peg through the sides. Massive joinery with no apologies. 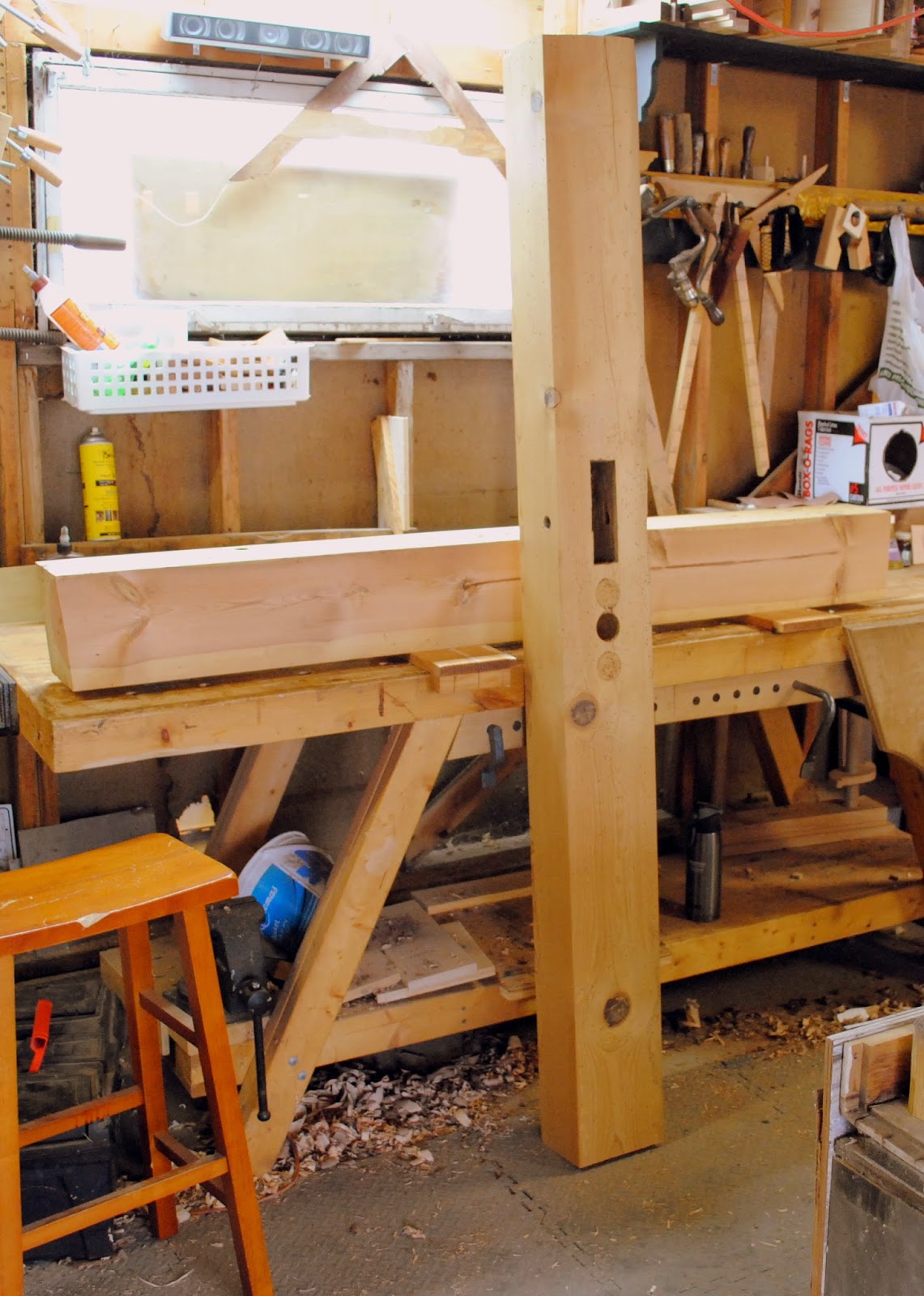 There is a cool bit of evidence the joiners who cut the mortise were human. You can see below the big mortise three holes were drilled, two of them are still filled with plugs. I was able to liberate one of the plugs before the beam was planed 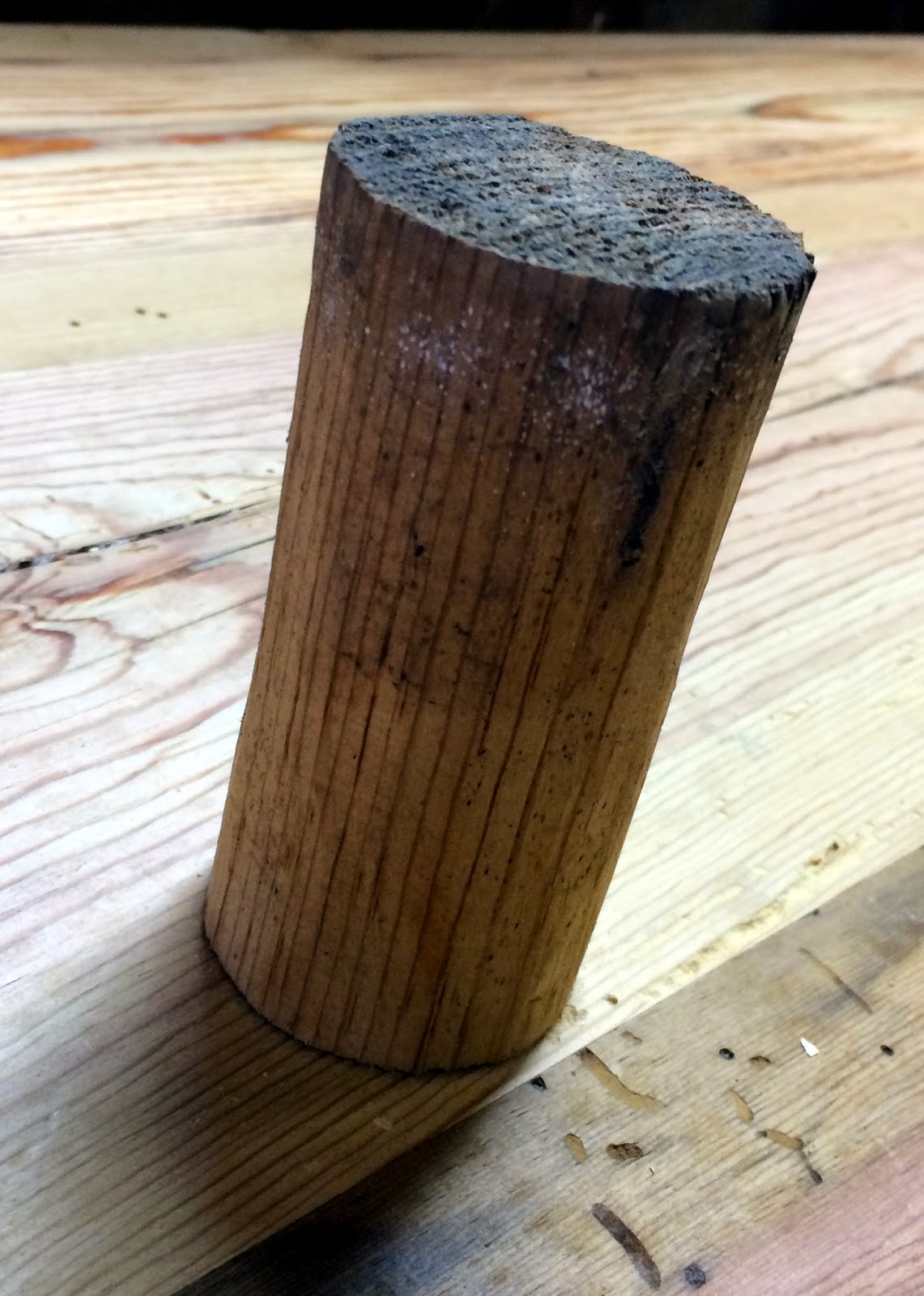 Before planing you could also make out the remaining pencil layout lines for a mortise. They had drilled for the mortise and before chopping out the waste, rechecked the measurements, realized they'd drilled on the wrong side of their line, plugged the holes and made the new mortise correctly. I'm not sure what makes you check one more time between drilling and chopping, I'd like to assume a apprentice/master type relationship where the master or a journeyman checked the young lads work and found it wanting. 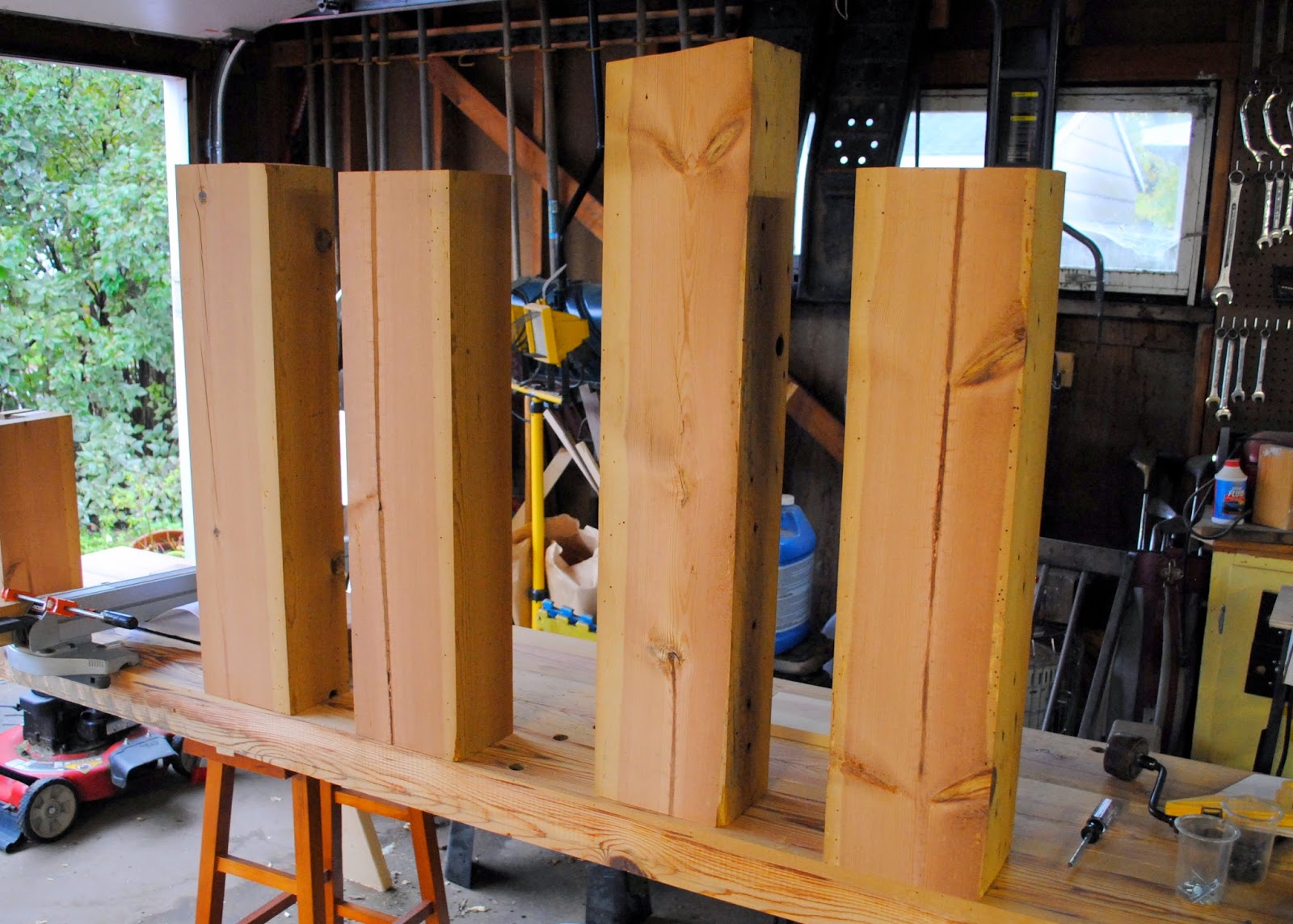 I hand sawed the legs square at one end and found a problem to solve. I'm a good hand sawyer. I like to do it even, but I am human and that leads to small inconsistencies. These legs are too big to shoot the ends to achieve the same length so I had to find a reliable way to get repeatable consistency. 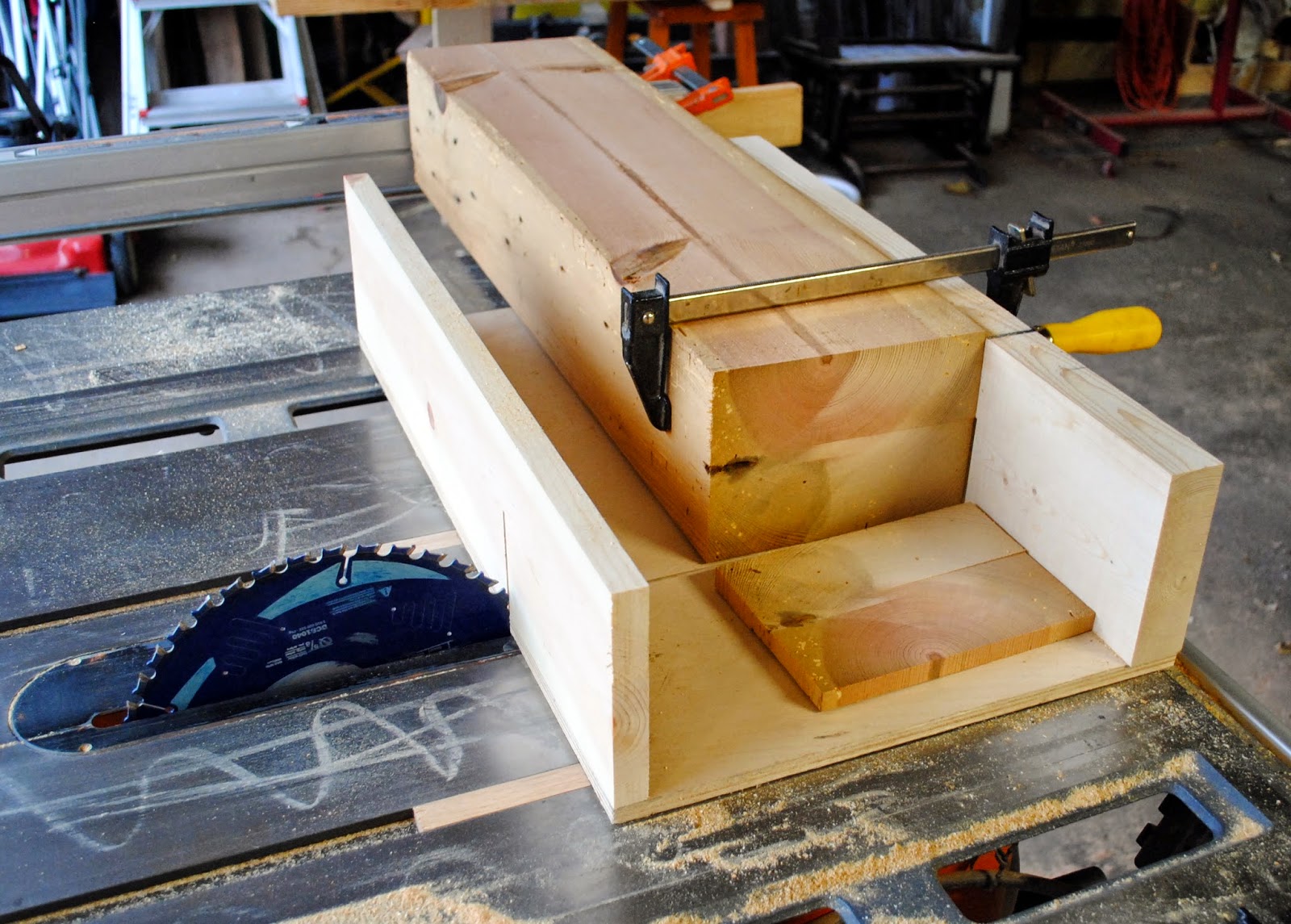 I've owned and used a tablesaw for nearly 15 years, I've never found a good enough reason to make a crosscut sled jig until now. I hate making jigs, but I decided it was the best way to accomplish the task with such heavy stock. I used the tablesaw's fence (with a spacer block) to set a consistent length of cut.

Some left over 1/2" plywood and an end of 1x6 and 2x6 joined to a couple oak runners and the jig was done. Now I guess I have one, so now I'll have to find a place to store it. Ughhh. 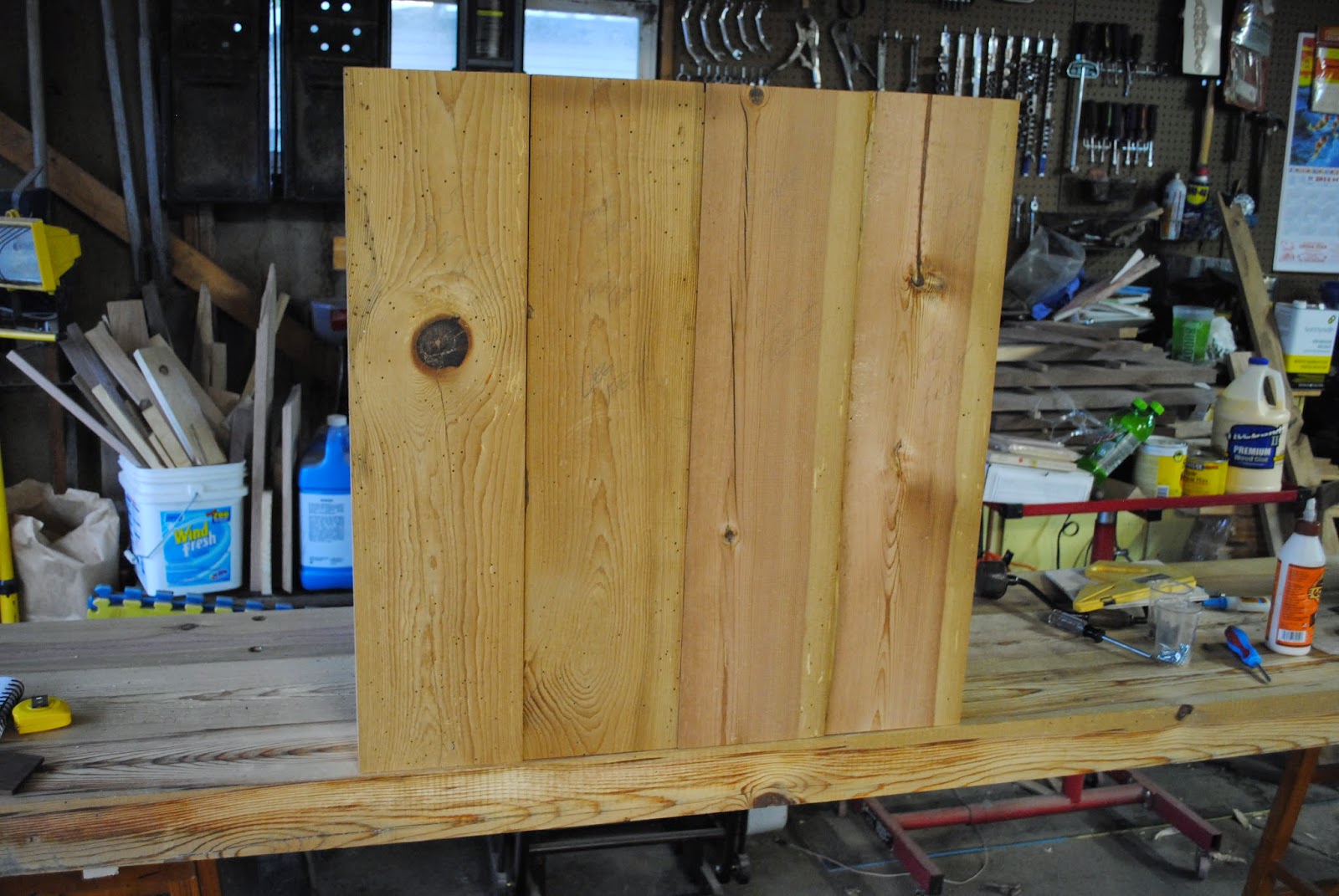 The results were very good. All four legs came out to the same dimension, and I was able to sort them into front and back legs and pick which one would be best for the eventual leg vise. 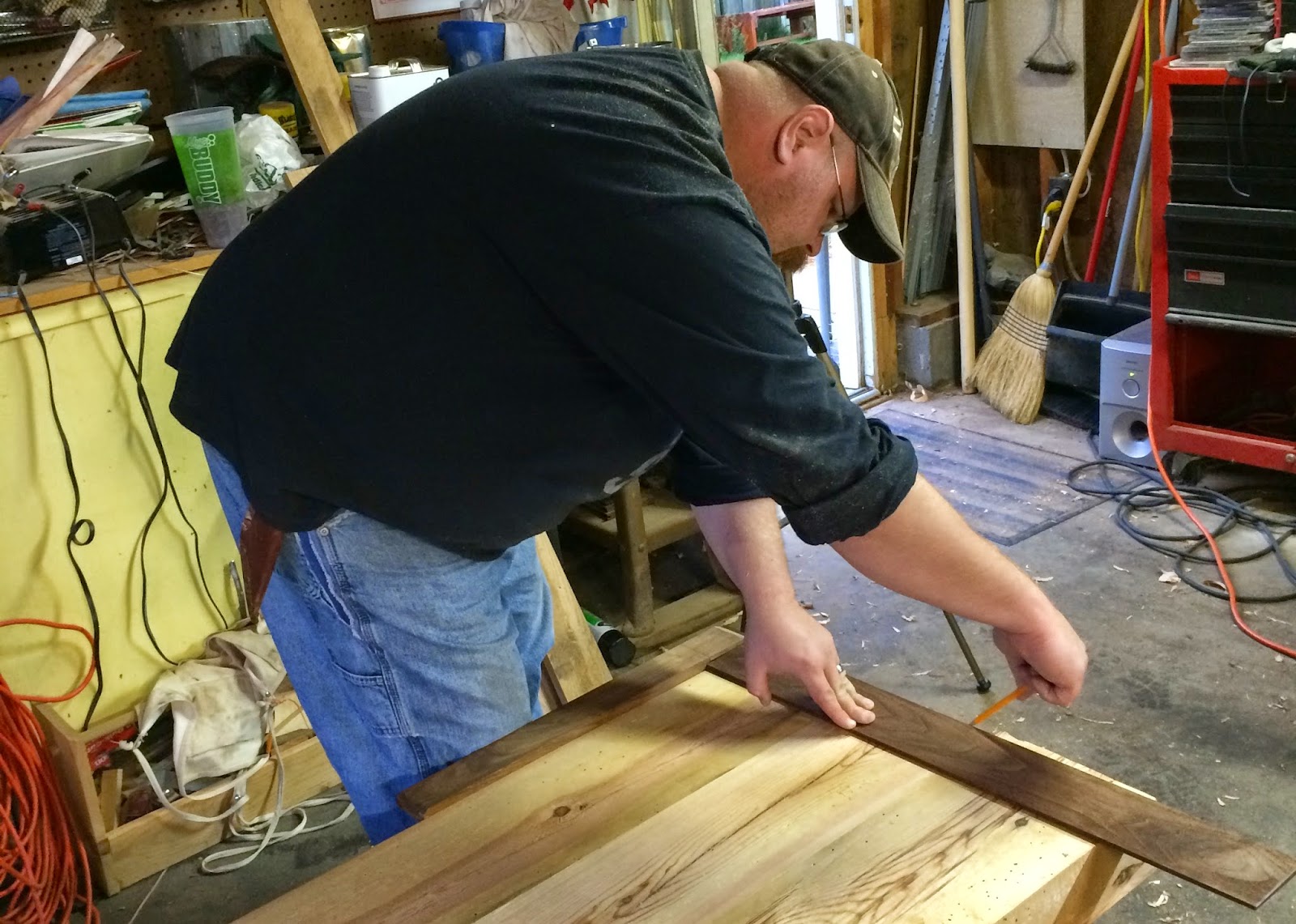 Getting the legs to length had eaten up nearly the entire day. I had enough time for one more task. Cutting the ends of the bench top square. I used the largest of my Benjamin Seaton Squares to square a line from the front face. I cut one end, measured down twelve feet . . . 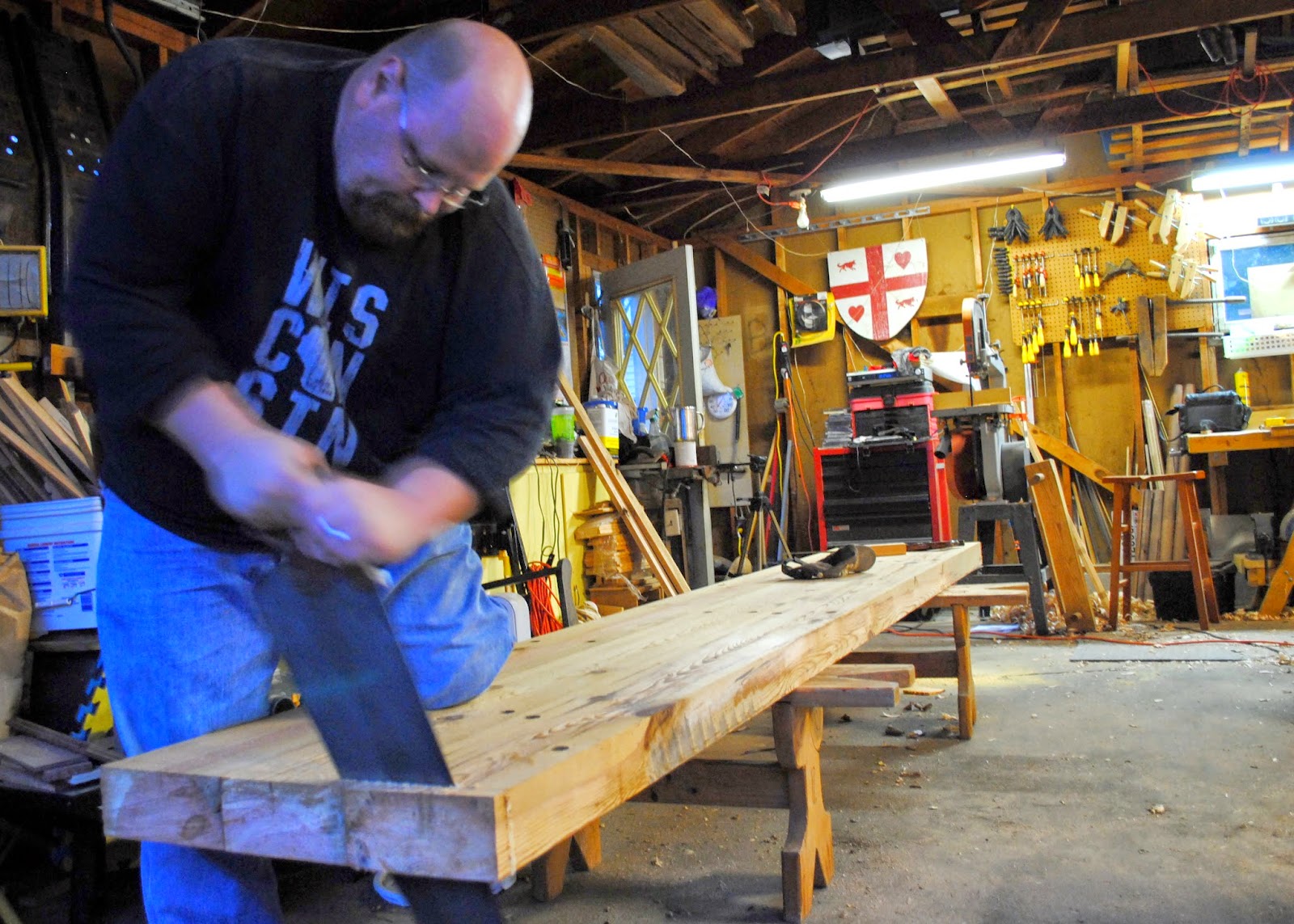